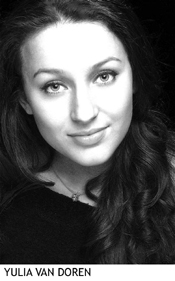 Described as having “the perfect baroque voice” (Seattle Times), soprano Yulia Van Doren was born in Moscow and raised in an eclectic, music-filled household where she and her seven younger siblings were taught voice and piano by her Russian mother and American jazz pianist father. While still an undergraduate at the New England Conservatory she was awarded the grand prize in the International J. S. Bach Vocal Competition and third prize in the American Bach Soloists’ Competition, and recorded the role of Ceres in Thésée. In 2007 Van Doren made her professional operatic debut as Poppea in L’Icoronazione di Poppea with the Early Music Guild of Seattle, to much critical acclaim. She also debuted at Carnegie Hall, the Bach Festival of Philadelphia, Boston Early Music Festival, and Tanglewood, where as a vocal fellow she sang Belinda in the acclaimed Mark Morris Dance Group production of Dido and Aeneas and performed in a concert of opera scenes coached by Maestro James Levine.

The Boston Early Music Festival (BEMF) is universally recognized as a leader in the field of early music. Since its founding in 1980 by leading practitioners of historical performance in the United States and abroad, BEMF has promoted early music through a variety of diverse programs and activities, including an annual concert series that brings early music’s brightest stars to the Boston concert stage, and the biennial weeklong festival and exhibition recognized as the “world’s leading festival of early music” (The Times, London). Most recently, BEMF initiated a project to record some of its groundbreaking work in the field of baroque opera; the first in this series, the 2003 Festival centerpiece Ariadne by Johann Georg Conradi, was met with enormous audience and critical praise, including a nomination for a 2005 Grammy Award for Best Opera Recording.


Conceived and designed by the renowned American soprano Dawn Upshaw, the Graduate Program in Vocal Arts of The Bard College Conservatory of Music was created to prepare the young singer to meet the special artistic and practical challenges of a musical career in the 21st century. This unique two-year master of music degree balances a respect for established repertory and expressive techniques with the flexibility and curiosity needed to keep abreast of evolving musical ideas. It also includes a strong practical component, with seminars and classes on career skills led by some of the leading figures in arts management and administration. Each year a select group of up to eight singers is invited to join the program through an intensive audition process. For additional information see www.bard.edu/conservatory/vocalarts/, e-mail vap@bard.edu, or call 845-758-7196.

Van Doren is available for interviews and can be reached through Emily Darrow in the Public Relations Office at Bard College by calling 845-758-7512 or by e-mailing darrow@bard.edu.