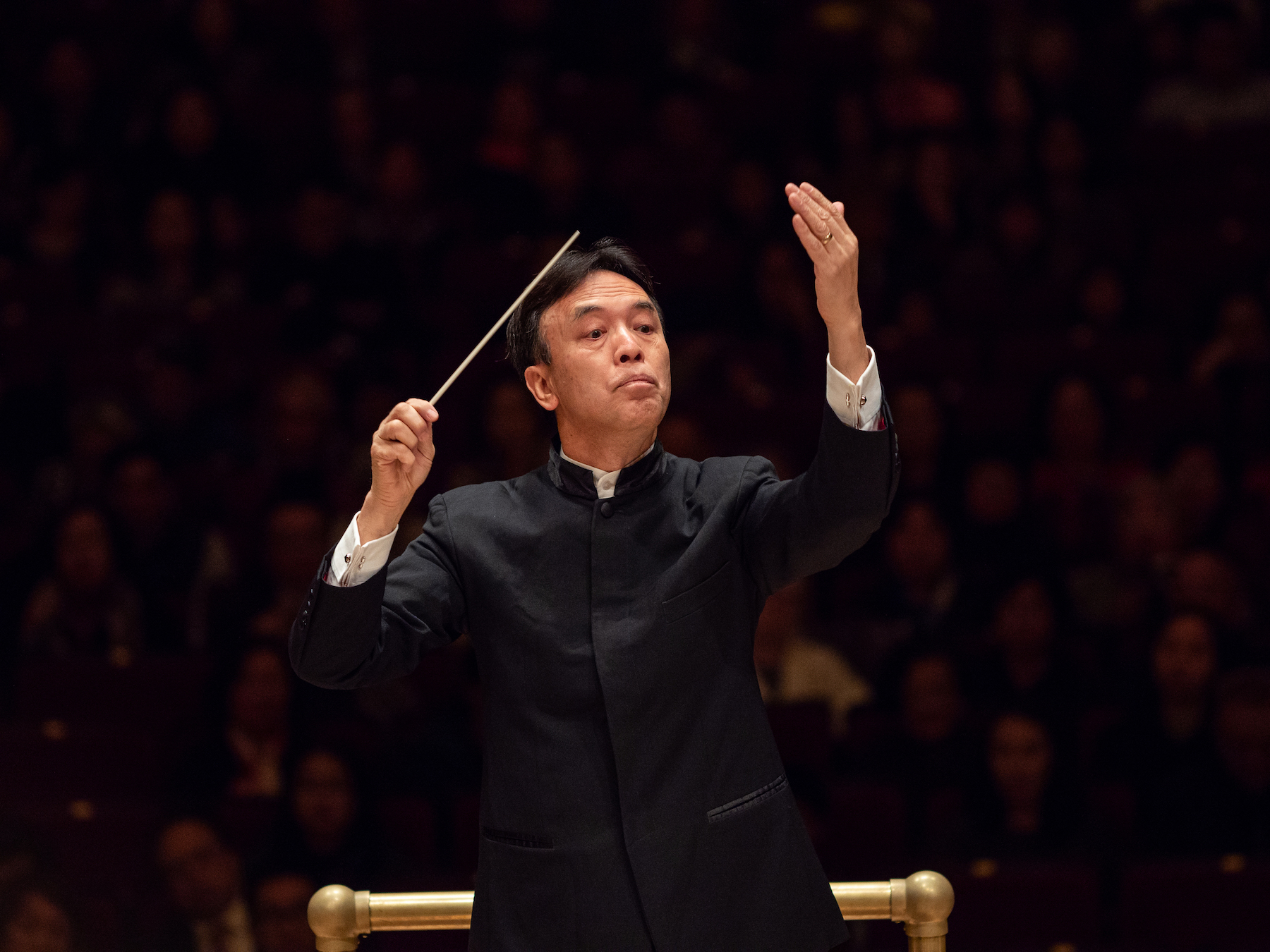 Events take place at Carnegie Hall, Bard College, and Stanford University
ANNANDALE-ON-HUDSON, N.Y.— The US-China Music Institute of the Bard College Conservatory of Music announces the second season of the China Now Music Festival, September 25-October 6. The festival’s major concerts take place at Carnegie Hall in New York City and at Bing Concert Hall at Stanford University. The festival is dedicated to promoting an understanding and appreciation of music from contemporary China through an annual series of concerts and academic activities. Last year’s inaugural season, titled Facing the Past, Looking to the Future, showcased new orchestral works by contemporary Chinese composers. The theme for 2019 is China and America – Unity in Music, in recognition of the 40th anniversary of the normalizing of diplomatic relations between the U.S. and China in 1979.

This year’s festival will coincide with New York State’s newly announced Senate Resolution No. J2103 by Senator James Sanders Jr. of Queens, “recognizing October 1, 2019, as China Day and the
first week of October 2019, as Chinese American Heritage Week, to strengthen the friendship and
bilateral relationship between the State of New York and Chinese Americans.”

The musical highlight of the festival takes place at 7:30 p.m. on October 1, “China Day,” at Stern Auditorium/Perelman Stage at Carnegie Hall. “From the Middle Kingdom to the Wild West” is an orchestral concert featuring the world premiere of Men of Iron and the Golden Spike 铁汉金钉, a symphonic oratorio by celebrated composer Zhou Long honoring the over 20,000 Chinese laborers who contributed to the completion of the Transcontinental Railroad in the American West 150 years ago. This piece was commissioned by the US-China Music Institute at Bard College in partnership with the Chinese Railroad Workers of North America Project and the Center for East Asian Studies at Stanford University. Over three years in the making, the idea was conceived by US-China Music Institute director Jindong Cai and Stanford history professor Gordon Chang, who enlisted Zhou Long to write the music and writer Su Wei to provide the libretto.  Zhou Long is well known for his seamless blending of Chinese and Western elements to create singularly expressive compositions, including the 2010 opera “Madame White Snake” which earned him a Pulitzer Prize. His new concerto for orchestra, Classic of Mountain and Seas 山海经, will also receive its U.S. premiere on October 1. Zhou describes Classic as a musical map inspired by “ancient supernatural aesthetics.” Both pieces will be performed by The Orchestra Now with festival artistic director Jindong Cai conducting. The orchestra will follow the path of the great rail line that connected East to West by performing the concert a second time at Stanford University’s Bing Concert Hall on October 6 at 2:30 p.m.

Another major festival concert will take place on Monday, September 30 at 7:00 p.m. in Zankel Hall at Carnegie Hall. Titled “Wellington Koo the Diplomat – A Life in Song,” this multimedia event features performances by world-renowned Chinese artists including Luoyong Wang as narrator, soprano Ying Huang and bass-baritone Shenyang, and a world-premiere new chamber piece by composer Peng-Peng Gong. With video projections, dramatic narration, and music, this concert will explore Koo’s role in opening China to the world and developing its relationship with the United States. A gala dinner and auction to benefit the US-China Music Institute will follow the concert in the Weill Music Room at Carnegie Hall.

With both of these concerts the festival puts a spotlight on the important contributions of Chinese in the United States, from the largely unknown to the world-famous.  The Chinese railroad workers played a pivotal role in the Westward expansion of the U.S. during the 19th century, but their labors were not widely reported and have rarely been acknowledged. Zhou Long’s oratorio will give new voice to their epic story. Diplomat Wellington Koo participated in some of the most important events of the 20th Century, famously refusing to sign the 1919 Treaty of Versailles out of concern for China’s position in the post-war reorganization of world power, then serving as Ambassador to the U.S. and as a judge in the International Court of Justice, and playing a major role in the creation of the United Nations.

Jindong Cai, director of the US-China Music Institute and artistic director of the China Now Music Festival, sees the festival as a cultural counterpoint to the current political landscape. "Politics often divides people, but in art and music, you always find connections. With the China Now Music Festival as our looking glass, we hope to continue bringing people and traditions from China and America together through music."

Other festival events continue to explore these and other topics in US-China relations. On September 25 at 6:30 p.m., the Museum of Chinese in America (MOCA) in Manhattan will host an evening with Zhou Long, Su Wei, and Jindong Cai to discover the conception, creation, and performance of Men of Iron and the Golden Spike. On September 28 at noon at the Jim Ottoway Jr. Film Center at Bard College, the US-China Music Institute presents a film preview of the forthcoming documentary “Beethoven in Beijing,” discussing the future of classical music through an exploration of the Philadelphia Orchestra’s close ties to China. An excerpt will be shown followed by conversation with the filmmakers and festival director Jindong Cai.  On September 29 at 7:00 p.m., pianist Susan Chan comes to the Bard College Conservatory of Music to perform a selection of solo works inspired by Chinese musical traditions, including pieces by Tan Dun, Zhou Long, Chen Yi, and Alexander Tcherepnin.

The US-China Music Institute was founded in 2017 by conductor Jindong Cai and Robert Martin, founding director of the Bard College Conservatory of Music, with the mission to promote the study, performance, and appreciation of music from contemporary China and to support musical exchange between the United States and China. In partnership with the prestigious Central Conservatory of Music in Beijing, the Institute has embarked on the Chinese Music Development Initiative, creating several groundbreaking projects including the first degree-granting program in Chinese instrument performance in a U.S. conservatory, the annual China Now Music Festival, an annual scholarly conference, and youth programs in Chinese music. barduschinamusic.org

Jindong Cai is artistic director of the China Now Music Festival. He is professor of music and arts at Bard College and director of the US-China Music Institute of the Bard College Conservatory of Music. Prior to joining Bard, he was a professor and director of orchestral studies at Stanford University for 14 years. Over three decades of his career in the United States, Cai has established himself as a dynamic conductor, respected expert of Western classical music in China, and leading advocate of music from across Asia. He is frequently interviewed by news media around the world, including the New York Times, Wall Street Journal, BBC, and NPR. Together with his wife, Sheila Melvin, Cai has coauthored many articles on the performing arts in China and the book Rhapsody in Red: How Western Classical Music Became Chinese. Their latest book, Beethoven in China: How the Great Composer Became an Icon in the People’s Republic, was published by Penguin in September 2015. Cai is a Beijing native with strong ties to China’s musical world. He came to the United States in 1985 and studied at the New England Conservatory and the College-Conservatory of Music in Cincinnati. In 1989, he was selected to study with famed conductor Leonard Bernstein at the Tanglewood Music Center, and won the Conducting Fellowship Award at the Aspen Music Festival in 1990 and 1992. Cai is a three-time recipient of the ASCAP Award for Adventurous Programming of Contemporary Music, and received an “Asian Hero” award from the California State Legislature in 2010.

The Bard College Conservatory of Music is recognized as one of the finest conservatories in the United States. It is guided by the principle that young musicians should be broadly educated in the liberal arts and sciences to achieve their greatest potential. The mission of the Conservatory is to provide the best possible preparation for a person dedicated to a life immersed in the creation and performance of music. The five-year, double-degree program combines rigorous conservatory training with a challenging and comprehensive liberal arts program. All Conservatory students pursue a double degree in a thoroughly integrated program and supportive educational community. Graduating students receive a bachelor of music and a bachelor of arts in a field other than music. At the Bard Conservatory the serious study of music goes hand in hand with the education of the whole person. Founded in 2005 by cellist and philosopher Robert Martin, the Conservatory welcomed the composer Tan Dun as its new dean in the summer of 2019. bard.edu/conservatory

The Orchestra Now (TŌN) is a group of vibrant young musicians from across the globe who are making orchestral music relevant to 21st-century audiences. They are lifting the curtain on the musicians’ experience and sharing their unique personal insights in a welcoming environment. Handpicked from the world’s leading conservatories, the members of TŌN are not only thrilling audiences with their critically acclaimed performances but also enlightening curious minds by giving on-stage introductions and demonstrations, writing concert notes from the musicians’ perspective, and holding one-on-one discussions with patrons during intermissions. Conductor, educator, and music historian Leon Botstein founded TŌN in 2015 as a master’s degree program at Bard College, where he also serves as president. The orchestra is in residence at Bard’s Richard B. Fisher Center for the Performing Arts, presenting multiple concerts there each season as well as taking part in the annual Bard Music Festival. It also performs regularly at the finest venues in New York and beyond, including Carnegie Hall, Lincoln Center, the Metropolitan Museum of Art, and elsewhere. The orchestra has performed with many distinguished conductors, including Fabio Luisi, Neeme Järvi, Gerard Schwarz, and JoAnn Falletta. theorchestranow.org