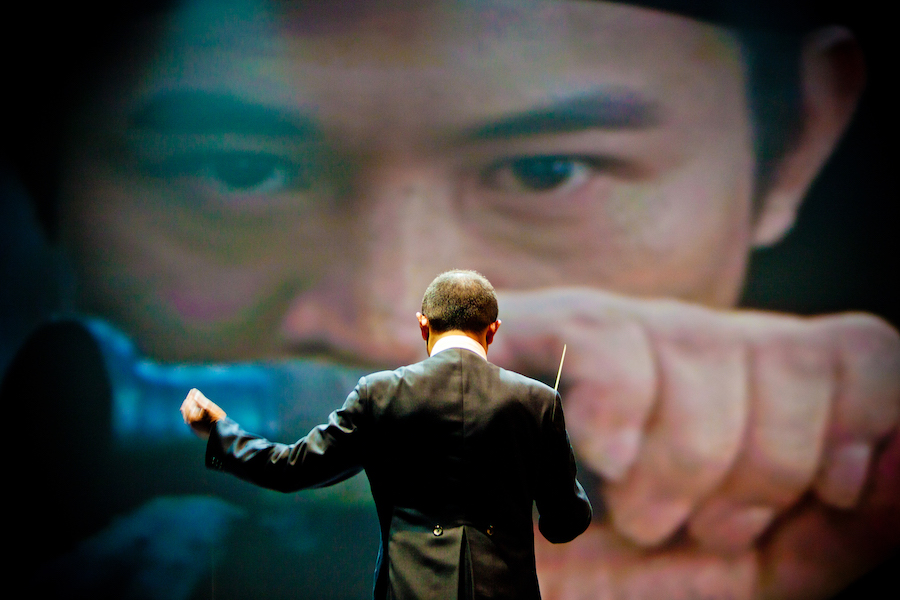 ANNANDALE-ON-HUDSON, N.Y—Tan Dun, Dean of the Bard College Conservatory of Music, conducts the Conservatory Orchestra in a film with live orchestra performance featuring excerpts from Crouching Tiger, Hidden Dragon, Hero, and The Banquet. See a video preview here. Conservatory faculty members Daniel Phillips, violin; Peter Wiley, cello; Blair McMillen, piano; and Benjamin Hochman, piano, will perform. This special program takes place on September 28 at 8 p.m., at the Fisher Center Center for the Performing Arts’s Sosnoff Theater. Tickets sales benefit the Conservatory Scholarship Fund. Tickets are $25-$150; the $150 ticket level includes a reception and meet and greet with the artists. To reserve tickets, go to fishercenter.bard.edu or call the box office at 845-758-7900.

The world-renowned artist and UNESCO Global Goodwill Ambassador Tan Dun, has made an indelible mark on the world's music scene with a creative repertoire that spans the boundaries of classical music, multimedia performance, and Eastern and Western traditions. A winner of today's most prestigious honors including the Grammy Award, Oscar/Academy Award, Grawemeyer Award, Bach Prize, Shostakovich Award, and most recently Italy’s Golden Lion Award for Lifetime Achievement, Tan Dun's music has been played throughout the world by leading orchestras, opera houses, international festivals, and on radio and television. This past year, Tan Dun conducted the grand opening celebration of Disneyland Shanghai which was broadcast to a record-breaking audience worldwide.

Tan Dun’s individual voice has been heard widely by international audiences. His first Internet Symphony, which was commissioned by Google/YouTube, has reached over 23 million people online. His Organic Music Trilogy of Water, Paper and Ceramic has frequented major concert halls and festivals. Paper Concerto was premiered with the Los Angeles Philharmonic at the opening of the Walt Disney Hall. His multimedia work, The Map, premiered by YoYo Ma and the Boston Symphony Orchestra, has toured more than 30 countries worldwide. Its manuscript has been collected by the Carnegie Hall Composers Gallery. His Orchestral Theatre IV: The Gate was premiered by Japan’s NHK Symphony Orchestra and crosses the cultural boundaries of Peking Opera, Western Opera and puppet theatre traditions. Other important premieres include Four Secret Roads of Marco Polo for the Berlin Philharmonic, Piano Concerto “The Fire” for Lang Lang and the New York Philharmonic. In recent seasons, his percussion concerto, The Tears of Nature, for soloist Martin Grubinger premiered in 2012 with the NDR Symphony Orchestra and Nu Shu: The Secret Songs of Women Symphony for 13 Microfilms, Harp and Orchestra was co-commissioned by The Philadelphia Orchestra, NHK Symphony Orchestra and the Royal Concertgebouw Orchestra Amsterdam.

As a visual artist, Tan Dun’s work has been featured at the opening of the China Pavilion at the 56th Venice Art Biennale. Other solo exhibitions include the New York’s Guggenheim Museum, Museum of Modern Art (MoMA), Beijing’s Chambers Fine Art Gallery, and Shanghai Gallery of Art. Most recently, Tan Dun conducted The Juilliard Orchestra in the world premiere of his Symphony of Colors: Terracotta for the opening of New York’s Metropolitan Museum of Art’s epic exhibition The Age of Empires.

As a global cultural leader, Tan Dun uses his creativity to raise awareness of environmental issues and to protect cultural diversity. In 2010, as “Cultural Ambassador to the World” for the World EXPO Shanghai, Tan Dun envisioned, curated and composed two special site-specific performances that perform year-round and have since become cultural representations of Shanghai: Peony Pavilion, a Chinese opera set in a Ming Dynasty garden and his Water Heavens string quartet which promotes water conservation and environmental awareness. Tan Dun was also commissioned by the International Olympic Committee (IOC) to write the Logo Music and Award Ceremony Music for the Beijing 2008 Olympic Games. Tan Dun currently serves as Honorary Chair of Carnegie Hall’s China Advisory Council, and has previously served as Creative Chair of the 2014 Philadelphia Orchestra China Tour, Associate Composer/Conductor of the BBC Scottish Symphony, and Artistic Director of the Festival Water Crossing Fire held at the Barbican Centre.

Recognized as one of the finest conservatories in the United States, The Bard College Conservatory of Music, founded in 2005, is guided by the principle that young musicians should be broadly educated in the liberal arts and sciences to achieve their greatest potential. All undergraduates complete two degrees over a five-year period: a bachelor of music and a bachelor of arts in a field other than music. The Conservatory Orchestra has performed twice at Lincoln Center, and has completed three international
concert tours to China, Hong Kong, and Taiwan; Russia and six cities in Central and Eastern Europe; and to three cities in Cuba.

The Graduate Vocal Arts Program is a unique master of music program in vocal arts that balances a respect for established repertory and expressive techniques with the flexibility and curiosity needed to keep abreast of evolving musical ideas. Led by the renowned American soprano Stephanie Blythe, the program prepares young singers to meet the special challenges of pursuing a professional life in music in the 21st century. Students engage with art song, chamber music, contemporary music, and operatic repertoire throughout their course work. Operatic performance includes a fully staged production at the Richard B. Fisher Center for the Performing Arts. The program includes seminars and classes in Alexander Technique, acting, diction and translation, development of performance opportunities, and a workshop in career skills with guest speakers who are leading figures in arts management and administration.

The Graduate Conducting Program, orchestral and choral, is a two-year curriculum that culminates in the master of music degree. The program is co-directed by James Bagwell, director of Bard’s undergraduate Music Program, and Leon Botstein, president of Bard College, music director and principal conductor of the American Symphony Orchestra and The Orchestra Now.

US-China Music Institute of the Bard College Conservatory of Music promotes the study, performance, and appreciation of music from contemporary China, and supports musical exchange between the United States and China. In partnership with the Central Conservatory of Music (Beijing, China), the Institute has launched the Chinese Music Development Initiative, consisting of several components: a dual-degree undergraduate college program for students of Chinese instruments, an annual Chinese Music Festival, and a program of scholarly conferences.

The Preparatory Division offers young people between the ages of 3 and 18 the joy of studying music in the context of a first-class conservatory.  The early study of music brings important benefits to young people, touching many areas of their lives: language, motor and social skills, and an appreciation for the value of diligent effort. Most important, music enriches the young person’s life and provides a lifetime of enjoyment.

For more information go to bard.edu/conservatory.