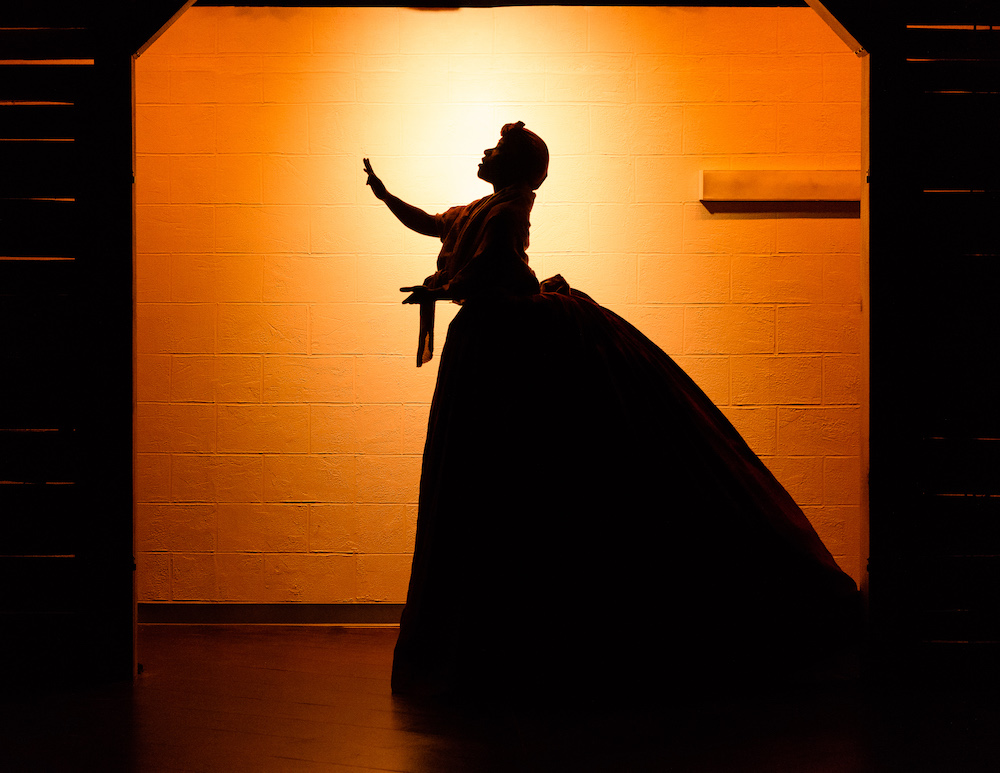 “A lacerating comedy on race … in-all-ways sensational,” Ben Brantley, New York Times (Critic’s Pick)
2017 Obie Award-Winner for Best New American Theatre Work
ANNANDALE-ON-HUDSON, N.Y.—Lauded around the world and in the New York Times as “one of the best new American plays of the last 25 years,” the Ars Nova Production of Underground Railroad Game comes to the Fisher Center’s LUMA Theater on October 9-12 at 7:30 p.m. Tickets start at $25; to purchase tickets and get additional information go to fishercenter.bard.edu or call the Fisher Center box office at 845-758-7900.

Underground Railroad Game is performed by the work’s creators, Jennifer Kidwell (last seen at the Fisher Center in the 2016 SummerScape production of Demolishing Everything with Amazing Speed) and Scott R. Sheppard, who go round after round on the mat of our nation’s history, tackling race, sex, and power in this R-rated, kaleidoscopic, and fearless comedy. “This riveting, whip-smart performance piece... is as daringly unexpurgated as anything you’ll encounter onstage today,” writes Peter Marks in The Washington Post. “It’s an effort to reset the table for the complicated conversation about race that America eternally attempts to start, and always ends up recoiling from in guilt and insecurity and anger.” The play, inspired by an actual classroom game Sheppard experienced as a child in Hannover, PA, is a pointed and hilarious look at the legacy of slavery in America and how that legacy influences contemporary dialogues around race 400 years after the first enslaved peoples from Africa arrived on this continent.

Underground Railroad Game is written by Kidwell and Sheppard with Lightning Rod Special, directed by Taibi Magar, and produced by Octopus Theatricals. It is presented as part of Bard’s Hannah Arendt Center’s annual conference, Racism and Antisemitism.

Jennifer Kidwell is a performing artist. Recent projects – Demolishing Everything with Amazing Speed (Dan Hurlin), the Bessie Award winning I Understand Everything Better (David Neumann/advanced beginner group), Antigone (The Wilma Theater), Fire Burns Hot, I Promised Myself to Live Faster and 99 Break-Ups (Pig Iron Theatre Company), Dick's Last Stand (Whitney Biennial 2014, as Donelle Woolford), Zinnias: the Life of Clementine Hunter (Robert Wilson/Toshi Reagon/Dr. Bernice Johnson Reagon). Projects in process include Geoff Sobelle’s House/Home, Nichole Canuso’s Body of Text, Those With Two Clocks (with PITC) and a duet with Thomas Graves. She is a PITC company member, a Wilma Theater Associated Artist, a Lightning Rod Special company member and a co-founder of JACK. Her writing has been published in movement research Performance Journal #45 and at hyperallergic.com. In 2013 she was awarded the TCG/Fox Resident Actor Fellowship (with Pig Iron Theatre Company), naming Underground Railroad Game as her primary project. In 2015 she was awarded an Art & Change Grant by the Leeway Foundation. She is a 2016 Pew Fellow.

The Fisher Center develops, produces, and presents performing arts across disciplines through new productions and context-rich programs that challenge and inspire. At once a premier professional performing arts center and a hub for research and education, the Fisher Center supports artists, students, and audiences in the development and examination of artistic ideas and perspectives from the past, present, and future. The organization’s home is the Fisher Center for the Performing Arts, designed by Frank Gehry and located on the campus of Bard College in New York’s Hudson Valley. The Fisher Center offers outstanding programs to many communities, including the students and faculty of Bard, and audiences in the Hudson Valley, New York City, across the country and around the world. The Fisher Center illustrates Bard’s commitment to the performing arts as a cultural and educational necessity. Building on a 150-year history as a competitive and innovative undergraduate institution, Bard is committed to enriching culture, public life, and democratic discourse by training tomorrow’s thought leaders.