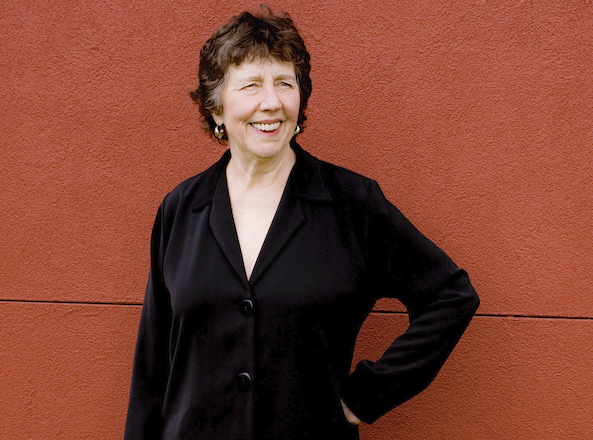 Annandale-on-Hudson, NY—Bard College Asher B. Edelman Professor in the Arts Joan Tower has been honored with one of the music industry’s most prestigious awards: Musical America’s Composer of the Year. “Trained in an era when academic modernism reigned, she developed from a composer of intensely wrought chamber works into a creator of dramatic orchestral music that can only be described as, well, towering,” writes Musical America. The award will be presented at the 59th Annual Musical America Awards ceremony at Carnegie Hall in December.

Tower is widely regarded as one of the most important American composers living today. During a career spanning more than fifty years, she has made lasting contributions to musical life in the United States as composer, performer, conductor, and educator.

She was also recently awarded Chamber Music of America’s Richard J. Bogomolny National Service Award, which recognizes an individual or entity that has made a significant contribution to the ensemble music field on a national level and spanning an entire career. Earlier this year the League of American Orchestras presented Tower with its highest honor, the Gold Baton, at the league’s 74th national conference.

“It has been quite the year for me—three huge awards from the music industry. At 81, its very welcomed!” says Tower. “I’ve also been invited to be inducted into the Classical Music Hall of Fame, and to archive all my works at the Library of Congress, so it’s been a very momentous year.”

Tower has been commissioned by the New York Philharmonic for a new work to debut in a future season.

She is currently Asher Edelman Professor of Music at Bard College, where she has taught since 1972.

Joan Tower is widely regarded as one of the most important American composers living today. During a career spanning more than fifty years, she has made lasting contributions to musical life in the United States as composer, performer, conductor, and educator. Her works have been commissioned by major ensembles, soloists, and orchestras, including the Emerson, Tokyo, and Muir quartets; soloists Evelyn Glennie, Carol Wincenc, David Shifrin, Paul Neubauer, and John Browning; and the orchestras of Chicago, New York, St. Louis, Pittsburgh, Baltimore, Nashville, Albany NY, and Washington DC among others. In 2019 the League of American Orchestras awarded her its highest honor, the Gold Baton, at the League's 74th national conference. Tower is the first composer chosen for a Ford Made in America consortium commission of sixty-five orchestras. Leonard Slatkin and the Nashville Symphony recorded Made in America in 2008 (along with Tambor and Concerto for Orchestra).

The album collected three Grammy awards: Best Contemporary Classical Composition, Best Classical Album, and Best Orchestral Performance. Nashville’s latest all-Tower recording includes Stroke, which received a 2016 Grammy nomination for Best Contemporary Classical Composition. In 1990 she became the first woman to win the prestigious Grawemeyer Award for Silver Ladders, a piece she wrote for the St. Louis Symphony where she was Composer-in-Residence from 1985-88. Other residencies with orchestras include a 10-year residency with the Orchestra of St. Luke’s (1997-2007) and the Pittsburgh Symphony (2010-11). She was the Albany Symphony’s Mentor Composer partner in the 2013-14 season. Tower was cofounder and pianist for the Naumburg Award winning Da Capo Chamber Players from 1970-85. She has received honorary doctorates from Smith College, the New England Conservatory, and Illinois State University. She is Asher Edelman Professor of Music at Bard College, where she has taught since 1972.

Founded in 1860, Bard College in Annandale-on-Hudson, New York, is an independent, residential, coeducational college offering a four-year BA program in the liberal arts and sciences and a five-year BA/BS degree in economics and finance. The Bard College Conservatory of Music offers a five-year program in which students pursue a dual degree—a BMus and a BA in a field other than music. Bard offers MMus degrees in conjunction with the conservatory and The Orchestra Now, and at Longy School of Music of Bard College in Cambridge, Massachusetts. Bard and its affiliated institutions also grant the following degrees: AA at Bard High School Early College, a public school with campuses in New York City, Cleveland, Baltimore, and Newark, New Jersey; AA and BA at Bard College at Simon’s Rock: The Early College, in Great Barrington, Massachusetts, and through the Bard Prison Initiative at six correctional institutions in New York State; MA in curatorial studies, MS and MA in economic theory and policy, and MS in environmental policy and in climate science and policy at the Annandale campus; MFA and MAT at multiple campuses; MBA in sustainability in New York City; and MA, MPhil, and PhD in the decorative arts, design history, and material culture at the Bard Graduate Center in Manhattan. Internationally, Bard confers dual BA and MA degrees at the Faculty of Liberal Arts and Sciences, St. Petersburg State University, Russia (Smolny); dual BA and MAT degrees at Al-Quds University in East Jerusalem; and dual BA degrees at American University of Central Asia in Kyrgyzstan and Bard College Berlin: A Liberal Arts University.

Bard offers nearly 50 academic programs in four divisions. Total enrollment for Bard College and its affiliates is approximately 6,000 students. The undergraduate College has an enrollment of more than 1,900 and a student-to-faculty ratio of 10:1. In 2016, Bard acquired the Montgomery Place estate, bringing the size of the campus to nearly 1,000 acres. For more information about Bard College, visit bard.edu.