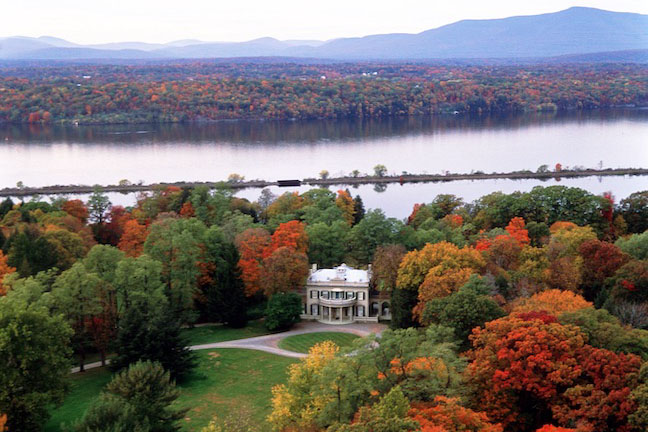 “The Town of Red Hook has areas that have been recognized locally, statewide, and nationally both as a scenic region, and for having significant historic architecture, landscapes, and viewsheds,” says Emily Majer, Town of Red Hook historian. “These attributes, along with the firm commitment to agriculture and open space, are character defining features of the town which contribute to the quality of life, and economic vitality. Consequently, it is important to be sensitive in the placement of ground and roof-mounted solar panels in designated historic districts and on historic structures, and to protect the viability of important agricultural land and built structures within the town.” Local Law 143-37 “Solar Energy Systems” spells out what kind, size, and placement of array is allowable in each zoning district in order to maximize the utilization of this renewable energy source, while preserving the historic and bucolic nature of the town.

“Small-scale hydropower was historically an important energy source in this area that may see a resurgence as we work to reduce our dependence on fossil fuel-based energy sources that are driving the climate crisis,” says Robyn Smyth, assistant professor of environmental and urban studies, Bard College.

The Town of Red Hook is home to the Hudson River National Historic Landmark District, the most prestigious designation of historic resources in the nation.

For more information and to register send an email to montgomeryplace@bard.edu or call 845-758-7505.

Originally, the land was occupied by Native Americans who used it for hunting and harvesting wild foods. During the 18th century, European settlers farmed the area and harnessed the power of the Sawkill Creek for gristmills and sawmills. In 1802, 58-year-old Janet Livingston Montgomery, widow of Revolutionary War hero Gen. Richard Montgomery, purchased the land to create a fashionable country house.

In 1804–5, she built a federal-style mansion on the property. Janet’s true passion was for plants and botany, and she established and ran a commercial nursery for fruit trees, shrubs, berries, and seeds. When she died in 1828, her brother Edward and his wife, Louise, inherited the property.

In the 1920s, Violetta and John Ross Delafield (a Livingston descendent) inherited the estate. Violetta, a botanist, created multiple gardens, continuing the legacy of Cora, Louise, and Janet. In 1986, Livingston heir John Dennis Delafield transferred the estate to Historic Hudson Valley in whose hands it remained until 2016, when Bard College acquired the property and a new chapter began.

Montgomery Place illustrates Americans’ changing relationship with nature and landscape over time. As the attitudes of the people who lived and worked there shifted, the estate changed from productive landscape to ornamental showcase to recreational retreat. Today, the Montgomery Place setting functions as a microcosm of American landscape history, from the early wilderness to its latest reincarnation as part of the integrated campus of Bard College. Bard is committed to conserving Montgomery Place’s significant historic and cultural assets as well as preserving its landscape and maintaining its public access and farm.

For more information go to bard.edu/montgomeryplace/