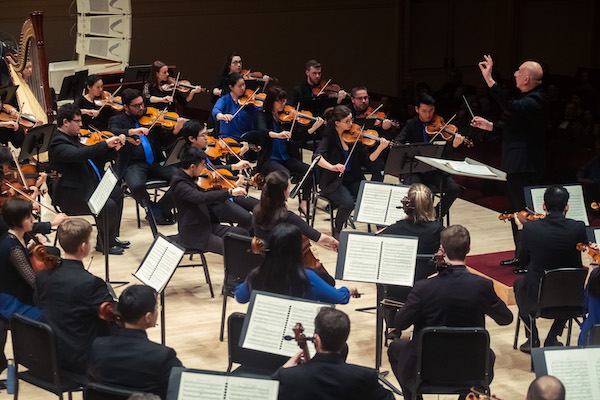 First New York City Performances of Works by Honegger and Mitropoulos
in More Than 50 Years
Annandale-on-Hudson, New York, October 28, 2019— The Orchestra Now will begin its season at Carnegie Hall on November 14 with seldom-heard performances of four works from the late 1920s that give insight into the evolving world of orchestral music 90 years ago. The program will also be performed on November 13 as part of the Ensemble’s Fisher Center series at Bard College.

The evening includes the suite from Stravinsky’s ballet score The Fairy’s Kiss, written as an homage to Tchaikovsky and based on Hans Christian Andersen's short story Isjomfruen (The Ice-Maiden). Marking their first New York City performances in more than 50 years are Honegger’s Rugby, which was written to evoke the sport of rugby and is the second of the composer's three "mouvements symphoniques;" and Mitropoulos’ 1929 Concerto Grosso, considered by the composer to be his best work. Rounding out the program is Othmar Schoeck’s song cycle Buried Alive, adapted from Gottfried Keller’s poem Lebendig Begraben, about a man who wakes up to find he has been buried by mistake. German baritone Michael Nagy, who recently appeared as Don Alfonso in Così fan tutte at Zurich Opera House, is the soloist.

The next concert at Carnegie Hall is Into the Wilderness, a program featuring the NYC premiere of César Franck’s beautiful What You Hear on the Mountain (April 30, 2020 at Carnegie Hall).

The Orchestra Now
The Orchestra Now (TŌN) is a group of 65 vibrant young musicians from 12 different countries across the globe: Bulgaria, China, Hungary, Indonesia, Japan, Korea, Mongolia, Peru, Taiwan, Ukraine, the U.K., and the U.S. All share a mission to make orchestral music relevant to 21st-century audiences by sharing their unique personal insights in a welcoming environment. Hand-picked from the world’s leading conservatories—including The Juilliard School, Shanghai Conservatory of Music, Royal Conservatory of Brussels, and the Curtis Institute of Music—the members of TŌN are enlightening curious minds by giving on-stage introductions and demonstrations, writing concert notes from the musicians’ perspective, and having one-on-one discussions with patrons during intermissions.

The Orchestra has performed with many distinguished guest conductors and soloists, including Neeme Järvi, Vadim Repin, Fabio Luisi, Peter Serkin, Gerard Schwarz, Tan Dun, Zuill Bailey, and JoAnn Falletta. In the 2019–20 season, conductors Leonard Slatkin and Hans Graf will also lead TŌN performances. Recordings featuring The Orchestra Now include Ferdinand Ries piano concertos with Piers Lane on Hyperion Records, and a Sorel Classics concert recording of pianist Anna Shelest performing works by Anton Rubinstein with TŌN and conductor Neeme Järvi. Upcoming albums include a second release with Piers Lane on Hyperion Records in the spring of 2020. Recordings of TŌN’s live concerts from the Fisher Center can be heard on Classical WMHT-FM and WWFM The Classical Network, and are featured regularly on Performance Today, broadcast nationwide. In 2019, the orchestra’s performance with Vadim Repin was live-streamed on The Violin Channel.