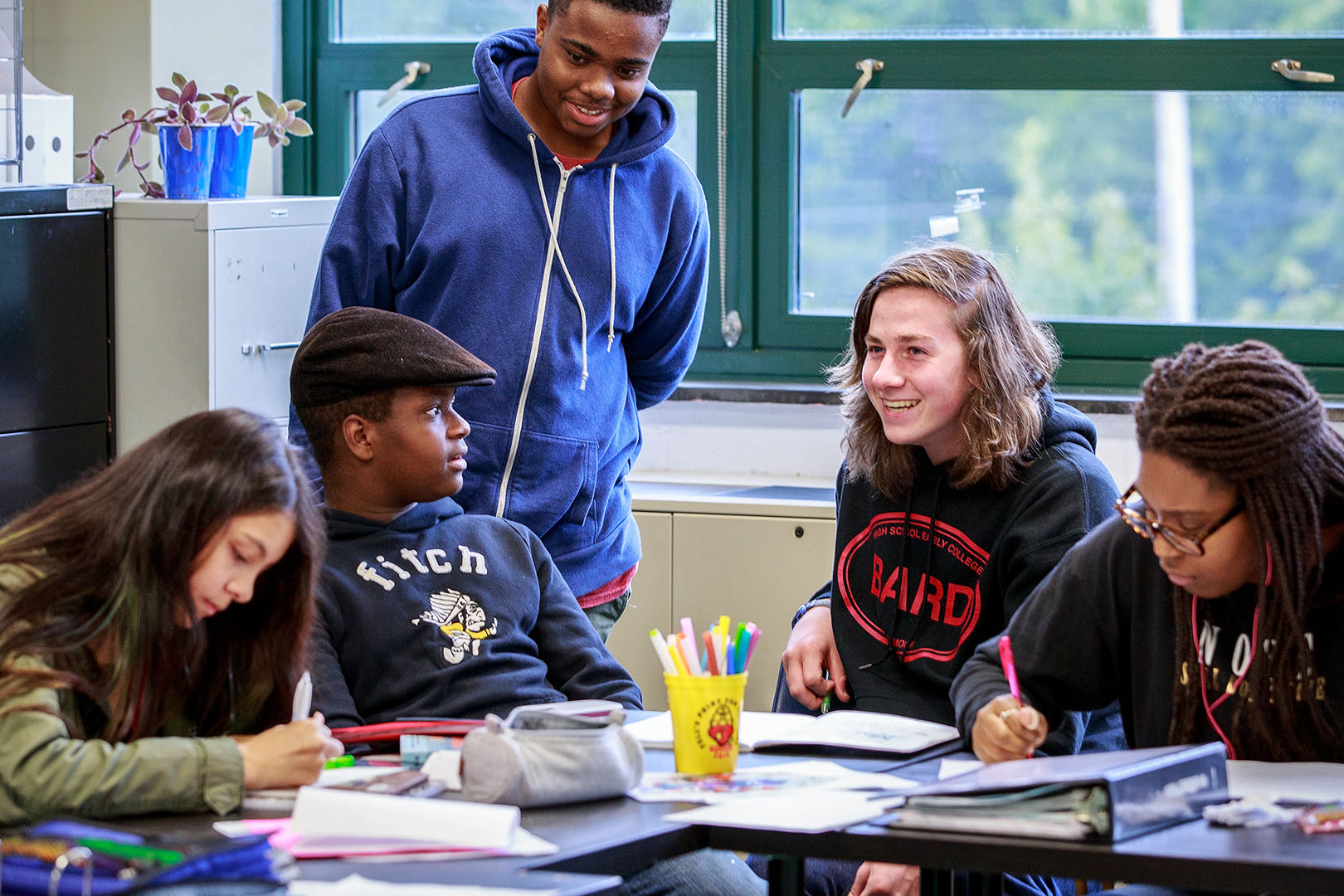 Bard High School Early College: A Case Study, conducted by Ithaka S+R, highlights the diverse background of BHSEC students and significantly higher college graduation rates as among the model’s impressive achievements. “With an emphasis on providing rigorous college coursework and training, particularly for lower-income and minority students, the BHSECs have established a curriculum, faculty, and admissions process with proven results for their students in terms of graduation and college enrollment rates,” the study finds. While many institutions are focused solely on how to bring more students of different backgrounds to their campus, “Bard College, a liberal arts college whose home campus is in Annandale-on-Hudson, New York, stands out for its focus on bringing the liberal arts to students who have not previously had access where they are.”

Citing an independent evaluation conducted by the research firm Metis Associates, the Ithaka S+R study reports that New York City BHSEC students are significantly more likely to graduate from high school compared to similarly situated peers in other district schools. These BHSEC graduates also enroll in and graduate from four-year colleges and universities at rates far higher than their peers: 97 percent of 2012 BHSEC Manhattan and Queens graduates in enrolled in college, compared to 82 percent of their peers. Furthermore, 79 percent of BHSEC students finish a bachelor’s degree in six years or less. Nationally, around 60 percent of students who start college earn a degree within eight years.

The study also examines the structural and pedagogical elements that have made the BHSEC model successful and offers several recommendations for other institutions, including hiring and training quality faculty with both university and K-12 experience, developing and maintaining a positive relationship with the local school district, and developing a rigorous and equitable admissions process that balances access and preparedness. “The success of the BHSEC model has shown that a rigorous liberal arts experience can be adapted effectively to an early college program and that selective colleges with a track record of success have a lot to offer in this field,” the study says. “For liberal arts colleges considering an early college as a component of their commitment to equity in education, the BHSECs provide valuable insights into the key criteria for, and possible obstacles to, success.”

Founded in 2001, the Bard Early Colleges are a nationally recognized network of tuition-free early college high schools and early college centers operated through partnerships with public school systems in five states and Washington, DC. These schools provide high school students, regardless of background, with a rigorous, tuition-free college course of study in the liberal arts and sciences and the opportunity to earn college credit and an associate’s degree alongside their high school diploma.
#

Ithaka S+R provides research and strategic guidance to help the academic and cultural communities serve the public good and navigate economic, demographic, and technological change. Ithaka S+R is part of ITHAKA, a not-for-profit organization that works to advance and preserve knowledge and to improve teaching and learning through the use of digital technologies. Artstor, JSTOR, and Portico are also part of ITHAKA. For more information, visit ithaka.org.

Bard College believes in the transformative power of a liberal arts and sciences education and that colleges can and should bring liberal arts and sciences to communities where it is underdeveloped, inaccessible, or absent. For this reason, Bard has developed a number of initiatives in cooperation with the public, nonprofit, and private sectors to address the educational needs of underserved communities.

Bard High School Early Colleges are four-year public high schools. Students finish an accelerated high school program in the 9th and 10th grades and a full-time college program in place of the 11th and 12th grades. BHSECs award up to 60 college credits and an AA degree in addition to a state high school diploma. All courses are held on the same campus, and the same faculty teach across all four years. Bard operates BHSEC campuses in Manhattan, Queens, Newark, Cleveland, Baltimore, and Washington, D.C.