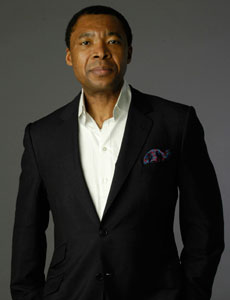 ANNANDALE-ON-HUDSON, N.Y.—The Center for Curatorial Studies at Bard College (CCS Bard) will present its twelfth annual Award for Curatorial Excellence to Okwui Enwezor, curator, art historian and Dean of Academic Affairs and Senior Vice President at San Francisco Art Institute. Enwezor is perhaps best known for his documenta 11 exhibition, a truly global exploration of critical issues affecting both art and culture today, and for his work as an ardent champion of artists from Africa. He has made remarkable efforts as an independent curator to present large-scale, challenging exhibitions with a consistent intellectual curiosity and integrity.

Enwezor will participate in a panel discussion, “Curating the Documentary” at CCS Bard in Annandale-on-Hudson, NY at 1 pm on March 7. Other panel participants include artist and panel moderator, Hito Steyerl, curator, Anne Ellegood, and visual artist and curator, Eduardo Thomas. The panel discussion is free and open to the public; however, reservations are recommended and can be made by calling 845.758.7598 or emailing ccs@bard.edu.

About the Award
Each year the Center for Curatorial Studies celebrates the individual achievements of a leading curator or curators whose lasting contributions have shaped the way we conceive of exhibition-making today. Past recipients of the award include Harald Szeemann (1998), Marcia Tucker (1999), Kasper König (2000), Paul Schimmel (2001), Suzanne Ghez (2002), Kynaston McShine (2003), Walter Hopps (2004), Kathy Halbreich and Mari Carmen Ramírez (2005), Lynne Cooke and Vasif Kortun (2006), Alanna Heiss (2007), and Catherine David (2008). This award reflects the Center’s commitment to recognizing individuals who have defined new thinking, bold vision, and dedicated service to the field of exhibition practice. The formal presentation of the 2009 award by renowned artist and filmmaker Isaac Julien, will be made at a gala dinner on April 22 at Gotham Hall (1356 Broadway at 36th Street) in New York City.

Okwui Enwezor
Okwui Enwezor, artistic director of documenta 11, the 2nd Johannesberg Biennale, the 2nd International Biennial of Contemporary Art of Seville, and The 7th Gwang-ju Biennale is one considered of the most groundbreaking international curators at work today. Nigerian-born, Enwezor studied political science before engaging the art world with the launch of his art journal, Nka in 1993. He began his curatorial career at the Solomon R. Guggenheim Museum with much the heralded exhibition In/sight: African Photographers 1940 to the present that presented a new vision of African art in the work of 30 contemporary African photographers. Enwezor went on to the Johannesberg Biennale and the highly acclaimed traveling exhibition on postwar African art and politics, The Short Century that began in Munich and traveled to Berlin, New York, and Chicago. In 2006 Enwezor curated Snap Judgements: New Positions in Contemporary African Photography that examined the most current photography practices arising in Africa.

Now the Dean of Academic Affairs and Senior Vice President at San Francisco Art Institute, Enwezor has held visiting professor positions at Columbia University, University of Pittsburgh, University of Illinois, Urbana and University of Umea, Sweden. As a curator, writer, critic, editor, and poet, Enwezor has contributed to many exhibition catalogues, journals and anthologies and has served on various juries, advisory bodies, and curatorial teams. He has received several other awards including the 2006 Frank Jewett Mather Award for criticism by the College Art Association, the Peter Norton Curatorial Award, and the International Association of Art Critics award.

About the Center for Curatorial Studies
The Center for Curatorial Studies at Bard College (CCS Bard) is an exhibition, education, and research center dedicated to the study of art and curatorial practices from the 1960s to the present day. In addition to the CCS Bard Galleries and the newly inaugurated Hessel Museum of Art, CCS Bard houses the Marieluise Hessel Collection of more than 2,000 contemporary works, as well as an extensive library and curatorial archive that are accessible to the general public. The Center’s two-year graduate program in curatorial studies is specifically designed to deepen students’ understanding of the intellectual and practical tasks of curating contemporary art. Exhibitions are presented year-round in the CCS Bard Galleries and Hessel Museum of Art, providing students with the opportunity to work with world-renowned artists and curators. The exhibition program and the collection also serve as the basis for a wide-range of public programs and activities exploring art and its role in contemporary society.