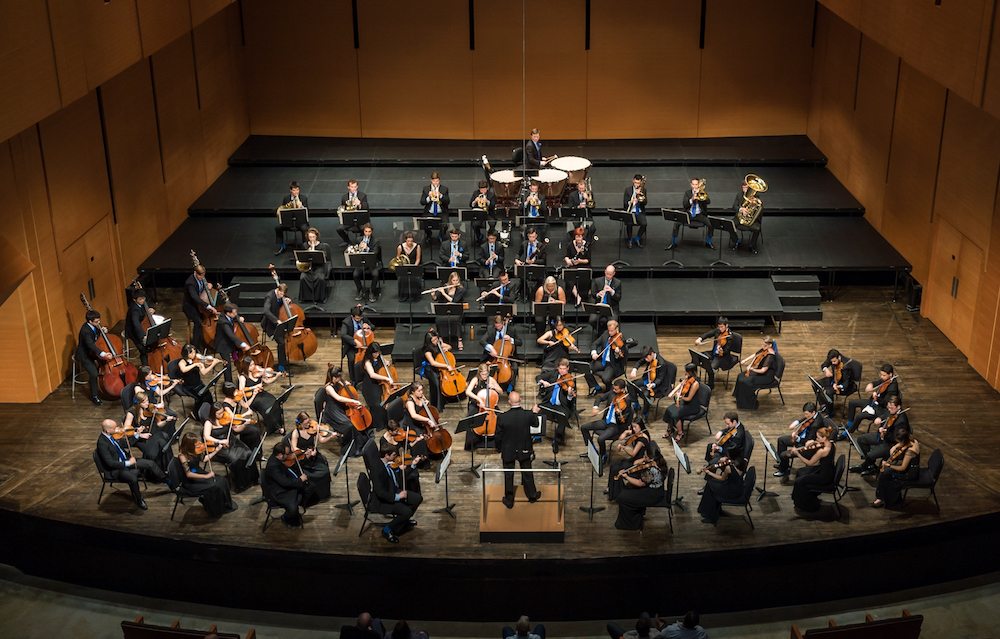 Tribute to Beethoven’s 250th Anniversary
Opera Special Event: Rest in Pieces
U.S. Premiere of César Franck’s What You Hear on the Mountain
Free Concert at Hudson Hall
Annandale-on-Hudson, NY— The Orchestra Now’s six-concert winter-spring season at Bard College’s Fisher Center will begin on Jan. 25 as the orchestra performs in The Sound of Spring, a Chinese New Year concert presented by the US-China Music Institute of the Bard College Conservatory of Music and the Central Conservatory of Music, China. TŌN’s subscription series continues on Feb. 8-9 with an all-Beethoven program in tribute to the 250th anniversary of the master composer’s birth. The soloist is pianist Anna Polonsky, a recipient of the Andrew Wolf Chamber Music Award and frequent guest with the Chamber Music Society of Lincoln Center. Rest in Pieces, a special program presented by the Bard Conservatory Graduate Vocal Arts Program, will celebrate the life of opera with the family and friends of Mozart, Strauss, Bizet, Copland, and Puccini, and will be performed on Mar. 6 and 8.

Also of note will be a program titled Into the Wilderness, offering the first New York performances in more than 50 years of two works: Vincent d’Indy’s Symphony on a French Mountain Air with solo pianist Blair McMillen—a winner of Juilliard’s Gina Bachauer Competition and faculty member of both Bard College Conservatory and the Mannes School of Music—and Vaughan Williams’ Symphony No. 7 (Sinfonia Antartica), featuring Filipino-American soprano Diana Schwam. In addition, the program will present the U.S. premiere of César Franck’s What You Hear on the Mountain, possibly the first symphonic poem in musical history (April 25-26). The Orchestra’s series will culminate with a performance of Mahler’s massive Resurrection Symphony featuring the combined forces of the Bard Conservatory Orchestra, Bard College Chamber Singers and Bard Festival Chorale led by conductor James Bagwell.

Tickets for most concerts are priced at $25–$35 and may be purchased online at fishercenter.bard.edu, by calling the Fisher Center at 845.758.7900, or at the Fisher Center box office in the lobby of Sosnoff Theater.

Beethoven’s Eroica
Sat, Feb 8, 2020 at 8 PM
Sun, Feb 9, 2020 at 2 PM
The 250th anniversary of the birth of one of the greatest composers of all time is celebrated with a performance of Beethoven’s heroic third symphony
Leon Botstein, conductor
Anna Polonsky, piano
Beethoven:
The Consecration of the House Overture
Piano Concerto No. 4
Symphony No. 3, Eroica

Special Event: Rest in Pieces
Fri, Mar 6, 2020 at 7:30 PM
Sun, Mar 8, 2020 at 3 PM
Presented by the Bard Conservatory Graduate Vocal Arts Program
A special performance to celebrate the life of opera. At this one of a kind ceremony, the family and friends of Mozart, Strauss, Bizet, Copland, and Puccini will share their fondest memories, explore some of their deep-seated issues, and live out their secret dreams.
James Bagwell, conductor
Soloists from Bard Conservatory’s Graduate Vocal Arts Program
Tickets: $15- 40

Into the Wilderness
Sat, Apr 25, 2020 at 8 PM
Sun, Apr 26, 2020 at 2 PM
A musical expedition featuring Vaughan Williams’ portrait of the mighty Antarctic and two French mountain treks, including the U.S. premiere of the first symphonic poem ever composed. This concert will be repeated at Carnegie Hall on April 30.
Leon Botstein, conductor
Blair McMillen, piano
Members of the Bard Festival Chorale
James Bagwell, choral director
Diana Schwam, soprano
Franck: What You Hear on the Mountain (U.S. Premiere)
d'Indy: Symphony on a French Mountain Air*
Vaughan Williams: Symphony No. 7, Sinfonia Antartica*
*First NY performances in over 50 years

The Orchestra Now
The Orchestra Now (TŌN) is a group of 65 vibrant young musicians from 12 different countries across the globe: Bulgaria, China, Hungary, Indonesia, Japan, Korea, Mongolia, Peru, Taiwan, Ukraine, the U.K., and the U.S. All share a mission to make orchestral music relevant to 21st-century audiences by sharing their unique personal insights in a welcoming environment. Hand-picked from the world’s leading conservatories—including The Juilliard School, Shanghai Conservatory of Music, Royal Conservatory of Brussels, and the Curtis Institute of Music—the members of TŌN are enlightening curious minds by giving on-stage introductions and demonstrations, writing concert notes from the musicians’ perspective, and having one-on-one discussions with patrons during intermissions.

The Orchestra has performed with many distinguished guest conductors and soloists, including Neeme Järvi, Vadim Repin, Fabio Luisi, Peter Serkin, Gerard Schwarz, Tan Dun, Zuill Bailey, and JoAnn Falletta. In the 2019–20 season, conductors Leonard Slatkin and Hans Graf will also lead TŌN performances. Recordings featuring The Orchestra Now include Ferdinand Ries piano concertos with Piers Lane on Hyperion Records, and a Sorel Classics concert recording of pianist Anna Shelest performing works by Anton Rubinstein with TŌN and conductor Neeme Järvi. Upcoming albums include a second release with Piers Lane on Hyperion Records in the spring of 2020. Recordings of TŌN’s live concerts from the Fisher Center can be heard on Classical WMHT-FM and WWFM The Classical Network, and are featured regularly on Performance Today, broadcast nationwide. In 2019, the orchestra’s performance with Vadim Repin was live-streamed on The Violin Channel.