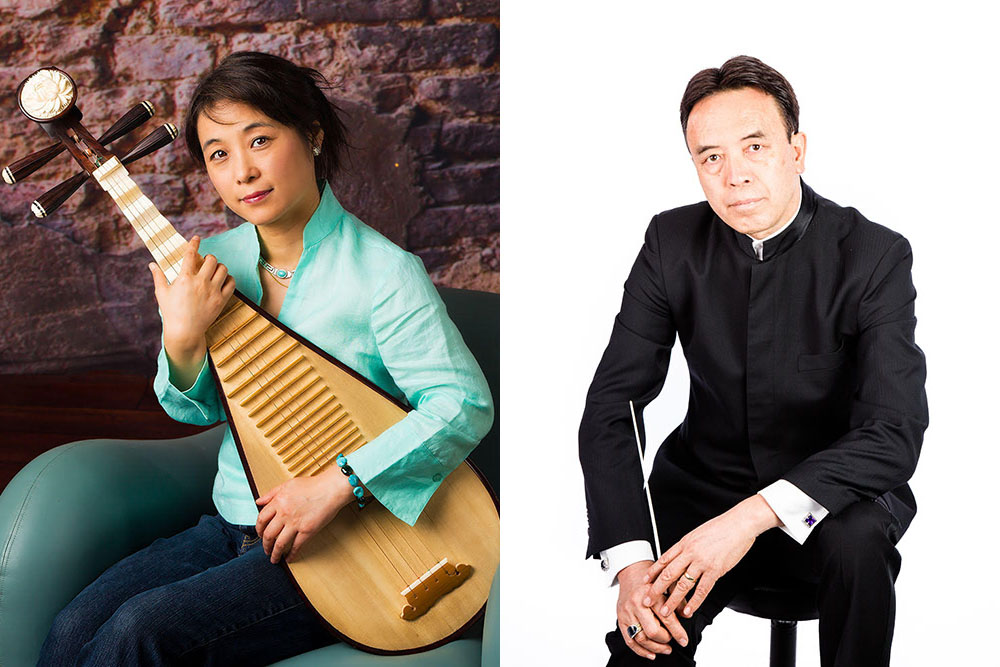 US-China Music Institute Presents The Sound of Spring, a Chinese New Year Concert with The Orchestra Now and Guests

The Sound of Spring will be offered free online in a livestream from the Fisher Center at Bard at 8 p.m. on Saturday, February 13. The program will feature a new performance by The Orchestra Now, conducted by Jindong Cai, along with performances from special guests including the Central Conservatory of Music Chinese Chamber Orchestra, the China NCPA Orchestra, the Hong Kong Chinese Orchestra, and the Contemporary Legend Theater from Taiwan. For information and reservations, click here.

The evening will be hosted by acclaimed pipa performer Wu Man and conductor Jindong Cai, who is the director of the US-China Music Institute. Musical selections include works by Tan Dun, Bao Yuankai, Wu Man, Julian Yu, Li Shaosheng, and more, plus a very special excerpt of a Chinese opera style adaptation of Shakespeare’s A Midsummer Night’s Dream.

Soloists include Wu Man performing a world premiere of her own composition for the pipa responding to this special time we are all experiencing; pianist and Bard faculty member Blair McMillan in the US-premiere of Li Shaosheng’s Spring China Capriccio; and Bard College Conservatory of Music undergraduate erhu major Beitong Liu performing with The Orchestra Now in two arrangements of traditional Chinese folk tunes. Kunqu opera masters Wu Hsing-kuo and Wei Han-min are the lead performers in the Contemporary Legend Theater adaptation of A Midsummer Night’s Dream.

The beginning of the concert will feature Tan Dun’s Internet ‘Eroica’ symphony to honor the many heroes worldwide who are working to combat the pandemic. The symphony will first be performed by the YouTube Symphony Orchestra conducted by Tan Dun, and then followed by a rearrangement of the same piece for the Hong Kong Chinese Orchestra using all Chinese instruments.

The program also offers a sampling of traditional and contemporary Chinese symphonic, chamber, solo, and theatrical music, showcasing different regional folk traditions, as well as blending Chinese and Western instruments and musical forms. Musical selections will send a message of hope, gratitude, renewal, and new beginnings, in the spirit of the Chinese New Year tradition of the Spring Festival.

“The Lunar New Year is celebrated by people all around the world. This is the year of the Ox, which symbolizes strength and determination. We created this year’s program to give people some feelings of hope and looking forward to the future. We hope through music we can give you inspiration.” - Jindong Cai


Saturday, February 13, at 8 p.m.
Free tickets may be reserved in advance at
fishercenter.bard.edu/events/the-sound-of-spring-2021
Donations may be added to your reservation and are gratefully accepted.

Conductor Jindong Cai is director of the US-China Music Institute, professor of music and arts at Bard College, and associate conductor of The Orchestra Now. Over his 30-year career in the United States, Cai has established himself as an active and dynamic conductor, scholar of Western classical music in China, and leading advocate of music from across Asia. Born in Beijing, Cai received his early musical training in China, where he learned to play violin and piano. He came to the United States for his graduate studies at the New England Conservatory and the College-Conservatory of Music in Cincinnati. In 1989, he was selected to study with famed conductor Leonard Bernstein at the Tanglewood Music Center, and won the Conducting Fellowship Award at the Aspen Music Festival in 1990 and 1992.

Cai started his professional conducting career with the Cincinnati Symphony Orchestra, and has worked with numerous orchestras throughout North America and Asia. He maintains strong ties to his homeland and has conducted most of the top orchestras in China. Cai has served as the principal guest conductor of the China Shenzhen Symphony Orchestra since 2012. He is a three-time recipient of the ASCAP Award for Adventurous Programming of Contemporary Music. Cai serves as the principal guest conductor of the Mongolia State Academic Theatre of Opera and Ballet in Ulaanbaatar. In 2004 he joined Stanford University faculty as director of orchestral studies and conducted the Stanford Symphony Orchestra for 11 years. He is also the founder of the Stanford Pan-Asian Music Festival. Cai founded the US-China Music Institute at the Bard Conservatory in 2017 and created the Institute’s the annual China Now Music Festival in the following year. In its first two seasons, China Now presented new works by some of the most important Chinese composers of our time, with concerts performed at Lincoln Center, Carnegie Hall, Bard’s Fisher Center, and Stanford University.

Together with his wife Sheila Melvin, Cai has coauthored many articles on the performing arts in China and the book Rhapsody in Red: How Western Classical Music Became Chinese. Their latest book, Beethoven in China: How the Great Composer Became an Icon in the People’s Republic, was published by Penguin in September 2015.


Recognized as the world’s premier pipa virtuoso, Wu Man is a soloist, educator and composer who gives her lute-like instrument—which has a history of more than 2,000 years in China—a new role in both traditional and contemporary music. Wu Man has premiered hundreds of new works for the pipa, while spearheading multimedia projects to both preserve and create global awareness of China’s ancient musical traditions. Projects she has initiated have resulted in the pipa finding a place in new solo and quartet works, concertos, opera, chamber, electronic, and jazz music as well as in theater productions, film, dance, and collaborations with visual artists. She has performed in recital and with major orchestras around the world, is a frequent collaborator with ensembles such as the Kronos Quartet and Shanghai Quartets and The Knights, and is a founding member of the Silkroad Ensemble. Wu Man has appeared in more than 40 recordings throughout her career, including seven Nominee Awards and the Silkroad Ensemble’s Grammy Award-winning recording Sing Me Home, featuring her own composition. She is also a featured artist in the 2015 documentary The Music of Strangers: Yo-Yo Ma and the Silk Road Ensemble.

Born in Hangzhou, China, Wu Man studied at the Central Conservatory of Music in Beijing, where she became the first recipient of a master's degree in pipa.  At age 13, she was hailed as a child prodigy and became a nationally recognized role model for young pipa players. She subsequently received first prize in the First National Music Performance Competition, among other awards, and participated in many premieres of works by Chinese composers. She moved to the U.S. in 1990 and was awarded the Bunting Fellowship at Harvard University in 1998. Wu Man was the first Chinese traditional musician to receive the United States Artist Fellowship (2008) and the first artist from China to perform at the White House. In 2013, she was named Musical America’s Instrumentalist of the Year. Now she is a distinguished Professor at both the Zhejiang and the Xi'an Conservatory, China. Wu Man serves as artistic advisor and teaches master classes for the US-China Music Institute of the Bard College Conservatory of Music.


Pianist Blair McMillan is a member of the faculty of the Bard College Department of Music. He studied at Oberlin College, The Juilliard School, and the Manhattan School of Music. A pianist, chamber musician, improviser, concert series curator, his appearances as soloist include Carnegie Hall, Avery Fisher Hall, le Poisson Rouge, Moscow Conservatory, Casals Hall (Tokyo), Miller Theatre. He has performed with American Symphony Orchestra, Orchestra of St. Luke's, Albany Symphony, Juilliard Orchestra (Lincoln Center and tour of Japan). He is a member of the Da Capo Chamber Players, American Modern Ensemble, and the Avian Orchestra. His solo recordings include Soundings (Midnight Productions), Concert Music of Fred Hersch (Naxos), and Multiplicities '38 (Centaur). He has been at Bard since 2006.

The US-China Music Institute was founded in 2018 by conductor Jindong Cai and Robert Martin, founding director of the Bard College Conservatory of Music, with the mission to promote the study, performance, and appreciation of music from contemporary China and to support musical exchange between the United States and China. In partnership with the prestigious Central Conservatory of Music in Beijing, the Institute has embarked on several groundbreaking projects including the first degree-granting program in Chinese instrument performance in a U.S. conservatory. barduschinamusic.org

Recognized as one of the finest conservatories in the United States, Bard College Conservatory of Music is guided by the principle that young musicians should be broadly educated in the liberal arts and sciences to achieve their greatest potential. The mission of the Conservatory is to provide the best possible preparation for a person dedicated to a life immersed in the creation and performance of music. The five-year, double-degree program combines rigorous conservatory training with a challenging and comprehensive liberal arts program. All Conservatory students pursue a double degree in a thoroughly integrated program and supportive educational community. Graduating students receive a bachelor of music and a bachelor of arts in a field other than music. At the Bard Conservatory the serious study of music goes hand in hand with the education of the whole person. Founded in 2005 by cellist and philosopher Robert Martin, the Conservatory welcomed the composer Tan Dun as its new dean in the summer of 2019. bard.edu/conservatory

The Orchestra Now (TŌN) is a group of vibrant young musicians from across the globe who are making orchestral music relevant to 21st-century audiences. They are lifting the curtain on the musicians’ experience and sharing their unique personal insights in a welcoming environment. Conductor, educator, and music historian Leon Botstein founded TŌN in 2015 as a master’s degree program at Bard College, where he also serves as president. The orchestra is in residence at Bard’s Richard B. Fisher Center for the Performing Arts, presenting multiple concerts there each season as well as taking part in the annual Bard Music Festival. It also performs regularly at the finest venues in New York and beyond, including Carnegie Hall, Lincoln Center, the Metropolitan Museum of Art, and elsewhere. The orchestra has performed with many distinguished conductors, including Fabio Luisi, Neeme Järvi, Gerard Schwarz, and JoAnn Falletta. theorchestranow.org

The Fisher Center at Bard develops, produces, and presents performing arts across disciplines through new productions and context-rich programs that challenge and inspire. As a premier professional performing arts center and a hub for research and education, the Fisher Center supports artists, students, and audiences in the development and examination of artistic ideas, offering perspectives from the past and present, as well as visions of the future. The Fisher Center demonstrates Bard’s commitment to the performing arts as a cultural and educational necessity. Home is the Fisher Center for the Performing Arts, designed by Frank Gehry and located on the campus of Bard College in New York’s Hudson Valley. The Fisher Center offers outstanding programs to many communities, including the students and faculty of Bard College, and audiences in the Hudson Valley, New York City, across the country, and around the world. Building on a 160-year history as a competitive and innovative undergraduate institution, Bard is committed to enriching culture, public life, and democratic discourse by training tomorrow’s thought leaders. fishercenter.bard.edu
# # #
(2.5.21)