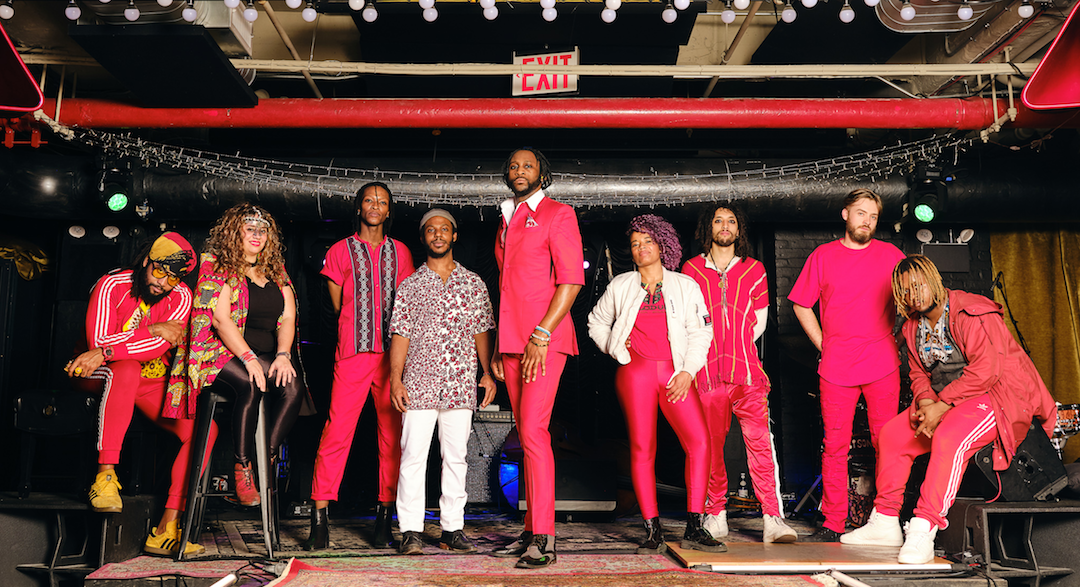 Mwenso and the Shakes. Photo by Oluwaseye Olusa

Programming Includes Mwenso and the Shakes in Love Will Be the Only Weapon Black Diasporic Music Sets; Mary Lou Williams Retrospective Genius Mother Mary; and The Sound of (Black) Music, an Afrofuturist Concert Reimagining of th
Bard SummerScape celebrates the uplifting spirit of Black music with Black Roots Summer, presented in association with Electric Root and organized and led by the rousing vocalist, bandleader, cultural commentator, and anti-racism educator Michael Mwenso and his longtime collaborator Jono Gasparro, former curator of Ginny’s Supper Club in Harlem. Over two weekends (July 23 & 24 and July 29-31) on an outdoor stage at Bard’s Montgomery Place campus on the Hudson River, the Sierra Leone-born, London-raised, NYC-based Mwenso and a predominantly BIPOC lineup of more than 20 artists, singers, musicians, and dancers will premiere three original concerts providing healing, enlightenment, and inspiration after a year of lockdown and uprisings for racial justice.

On the outdoor stage at Montgomery Place in July, they will share with the public three original shows they have created over the course of the engagement:

Following the SummerScape performances, Mwenso and Gasparro, through their mission-driven company Electric Root, plan to take these works to cultural and academic institutions worldwide, effecting change within and through them.

The origins of Electric Root lie in years of mentorship by Wynton Marsalis, whom Mwenso and Gasparro both met, in separate countries (Mwenso in England, Gasparro in the U.S.), as teenagers. When they were first introduced to one another, in their early twenties, at a music festival in Italy, they realized they were both protégés of Marsalis and, after hours of conversation, decided they “wanted to change the world through Black music together,” according to Mwenso. Their friendship developed further once they were both in New York; Gasparro had become Marsalis’ right-hand man, and, at Gasparro’s urging, Marsalis brought Mwenso to Jazz at Lincoln Center to join its programming team and head the After-Hours series at Dizzy’s Club.

Once they had both left Jazz at Lincoln Center, they formed Mwenso and the Shakes, a genre-spanning band The New York Times has called “intense, prowling, and ebullient,” and whose music NPR has described as “an explosion of ideas and sounds” radiating “infectious joy.” And because they were by now both accomplished curators—Gasparro went on to program Ginny’s Supper Club at Marcus Samuelsson’s Red Rooster in Harlem—they started developing themed concert programs that could cultivate appreciation of Black music, its history, and its relevance, such as We Shall Overcome and Harlem 100, which have toured nationally.

Mwenso explains that in the midst of the pandemic, and in response to the murder of George Floyd, they realized, “Now is the time to push the doors down.” They established Electric Root and set out to collaborate with universities and presenting institutions in order to “revolutionize how Black music is presented, expose lesser-known artists, decolonize music curriculum, provide artist-led anti-racism training, and heal people.” Black music had healed Mwenso from an early age, when his mother was in a car crash and her husband perished in the accident. To support Mwenso while his mother processed the trauma in her own way, Mwenso’s godfather began taking him nightly to concerts in London by artists including Ray Charles, Gladys Knight & the Pips, John Lee Hooker, Betty Carter, Solomon Burke, and B.B. King, to name a few.

Gasparro says that for the company he and Mwenso led before the pandemic, Jazz Management Group (JMG), the business model was simply “quantity of performances”—of which they programmed or performed upwards of 1,000 a year. Electric Root embodies what they want to do for the next 20 years: develop what they describe as “a new model for Black music: recentering it, re-crafting people’s relationship to how they see, hear, and feel it.” Gasparro elaborates, “Black music was sacred before commercialization. We want to get people back to understanding music as something that nourishes the soul.”

Electric Root’s engagement with the Fisher Center at Bard over the last year exemplifies the deep, multi-pronged collaboration Mwenso and Gasparro aim to have with institutions going forward. What was initially going to be just a weekend of concerts last summer has grown to include beyond-performance work such as anti-racism training, developed and led by Mwenso, Gasparro, Shariffa Ali, and Kamilah Long for the Fisher Center staff. Mwenso emphasizes “the residency we and our collaborators have had with Bard has been an ideal opportunity for Black artists to create, free from the stresses of the commercial world.”

All tickets go on sale on June 2. The box office can be reached by telephone at (845) 758-7900, on Mondays through Fridays at 11am–4pm EST, or by email at boxoffice@bard.edu. Tickets are also available 24/7 on the Fisher Center’s website at fishercenter.bard.edu/summerscape.

Founded in 1860, Bard College is a four-year residential college of the liberal arts and sciences located 90 miles north of New York City.  With the addition of the Montgomery Place estate, Bard’s campus consists of nearly 1000 park-like acres in the Hudson River Valley.  It offers bachelor of arts, bachelor of science, and bachelor of music degrees, with majors in nearly 40 academic programs; graduate degrees in 11 programs; nine early colleges; and numerous dual-degree programs nationally and internationally. Building on its 159-year history as a competitive and innovative undergraduate institution, Bard College has expanded its mission as a private institution acting in the public interest across the country and around the world to meet broader student needs and increase access to liberal education.  The undergraduate program at our main campus in upstate New York has a reputation for scholarly excellence, a focus on the arts, and civic engagement.  Bard is committed to enriching culture, public life, and democratic discourse by training tomorrow’s thought leaders.  For more information about Bard College, visit bard.edu.