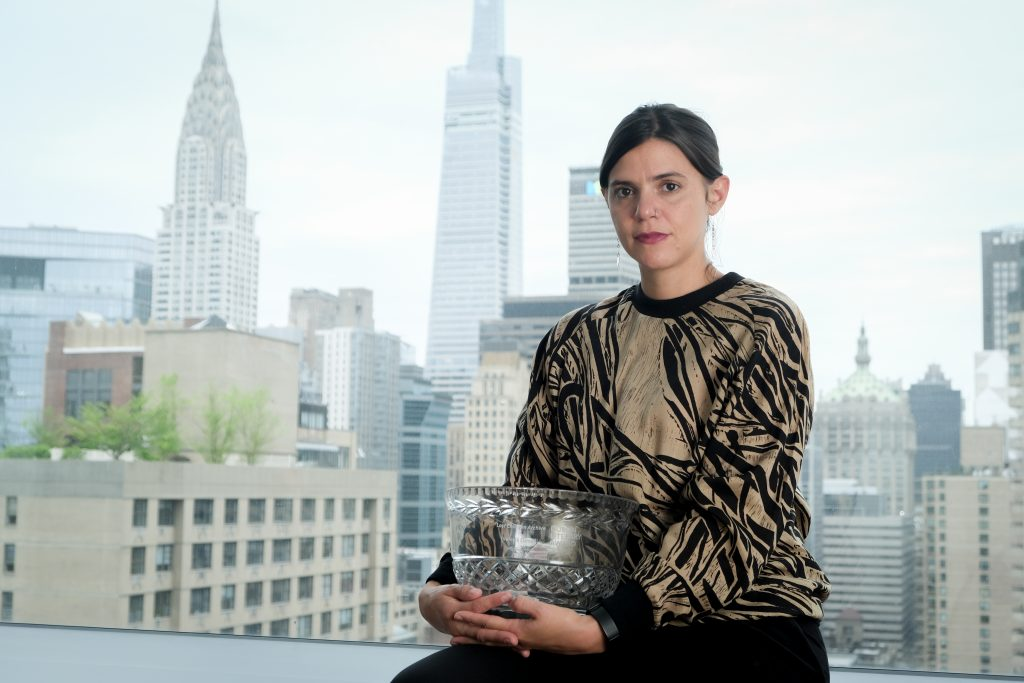 Author and Bard College professor Valeria Luiselli has won the 2021 Dublin Literary Award for her novel Lost Children Archive. Sponsored by Dublin City Council, the award, with prize money of €100,000, is the world’s largest prize for a single novel published in English. Luiselli is the first writer from Mexico and the fifth woman to claim the prestigious award in its 26-year history. Uniquely, the Dublin Award receives its nominations from public libraries in cities around the globe and recognizes both writers and translators. The winner was announced on Thursday, May 20, at a special online event, at the opening of the International Literature Festival Dublin, which runs until May 30. Lord Mayor Hazel Chu made the announcement from Dublin, with the presentation to the Luiselli taking place at the Irish Consulate in New York City. Irish Consul General Ciarán Madden, and previous winner of the Dublin Literary Award Colm Tóibín, presented Luiselli with her award on behalf of Dublin City Council.

“Lost Children Archive tells an old story, the one that Cervantes told . . . and Cormac McCarthy, the story of what happens to the human spirit on the road, how a long journey puts in jeopardy what was stable and agreed upon,” said Tóibín, who won the Dublin Literary Award in 2006 for his novel The Master. “Luiselli has written a novel in which stories spiral. She has rendered her characters with astonishing grace and insight, and through them she has drawn a picture of what they have been driving towards throughout the book, the contested place, where the old rules do not apply, for which a new form of archive is needed.”

Accepting her award, Luiselli spoke passionately about the importance of literature now more than ever. “I can say, without a hint of doubt, that without books–without sharing in the company of other writers’ human experiences –we would not have made it through these months,” she said. “If our spirits have found renewal, if we have found strength to carry on, if we have maintained a sense of enthusiasm for life, it is thanks to the worlds that books have given us. Each time, we found solace in the companions that live in our bookshelves.”

“This year’s Dublin Literary Award winner is a very important book, with significant themes around family and the things that matter to us most as human beings,” said Lord Mayor of Dublin and Patron of the Award Hazel Chu. “I am very proud of our City for providing this opportunity for the libraries of the world to nominate the books that have resonated most with readers. The Award helps us to learn about each other and reach a greater understanding of the world, through the insight which literature provides.”

About Lost Children Archive
In Valeria Luiselli’s fiercely imaginative follow-up to the American Book Award-winning Tell Me How It Ends, an artist couple set out with their two children on a road trip from New York to Arizona in the heat of summer. As the family travels west, the bonds between them begin to fray: a fracture is growing between the parents, one the children can almost feel beneath their feet. Through ephemera such as songs, maps and a Polaroid camera, the children try to make sense of both their family’s crisis and the larger one engulfing the news: the stories of thousands of kids trying to cross the southwestern border into the United States but getting detained—or lost in the desert along the way. A breath-taking feat of literary virtuosity, Lost Children Archive is timely, compassionate, subtly hilarious, and formally inventive—a powerful, urgent story about what it is to be human in an inhuman world.

About Lucas Valeria Luiselli
Valeria Luiselli, Sadie Samuelson Levy Professor in Languages and Literature at Bard College, was born in Mexico City and grew up in South Korea, South Africa and India. An acclaimed writer of both fiction and nonfiction, she is the author of the novels Faces in the Crowd and The Story of My Teeth, which won the 2016 LA Times Book Prize for Fiction; the essay collection Sidewalks; and Tell Me How It Ends: An Essay in Forty Questions. She is the winner of two Los Angeles Times Book Prizes and an American Book Award, and has twice been nominated for the National Book Critics Circle Award and the Kirkus Prize. She has been a National Book Foundation “5 Under 35” honoree and the recipient of a Bearing Witness Fellowship from the Art for Justice Fund. Her work has appeared in The New York Times, Granta, and McSweeney’s, among other publications, and has been translated into more than twenty languages. Lost Children Archive, which won the 2020 Rathbones Folio Prize, is her first novel written in English. She lives in New York City.

About Bard College
Founded in 1860, Bard College is a four-year residential college of the liberal arts and sciences located 90 miles north of New York City. With the addition of the Montgomery Place estate, Bard’s campus consists of nearly 1,000 parklike acres in the Hudson River Valley. It offers bachelor of arts, bachelor of science, and bachelor of music degrees, with majors in nearly 40 academic programs; graduate degrees in 11 programs; eight early colleges; and numerous dual-degree programs nationally and internationally. Building on its 161-year history as a competitive and innovative undergraduate institution, Bard College has expanded its mission as a private institution acting in the public interest across the country and around the world to meet broader student needs and increase access to liberal arts education. The undergraduate program at our main campus in upstate New York has a reputation for scholarly excellence, a focus on the arts, and civic engagement. Bard is committed to enriching culture, public life, and democratic discourse by training tomorrow’s thought leaders. For more information about Bard College, visit bard.edu.
# # #
(5/21/21)