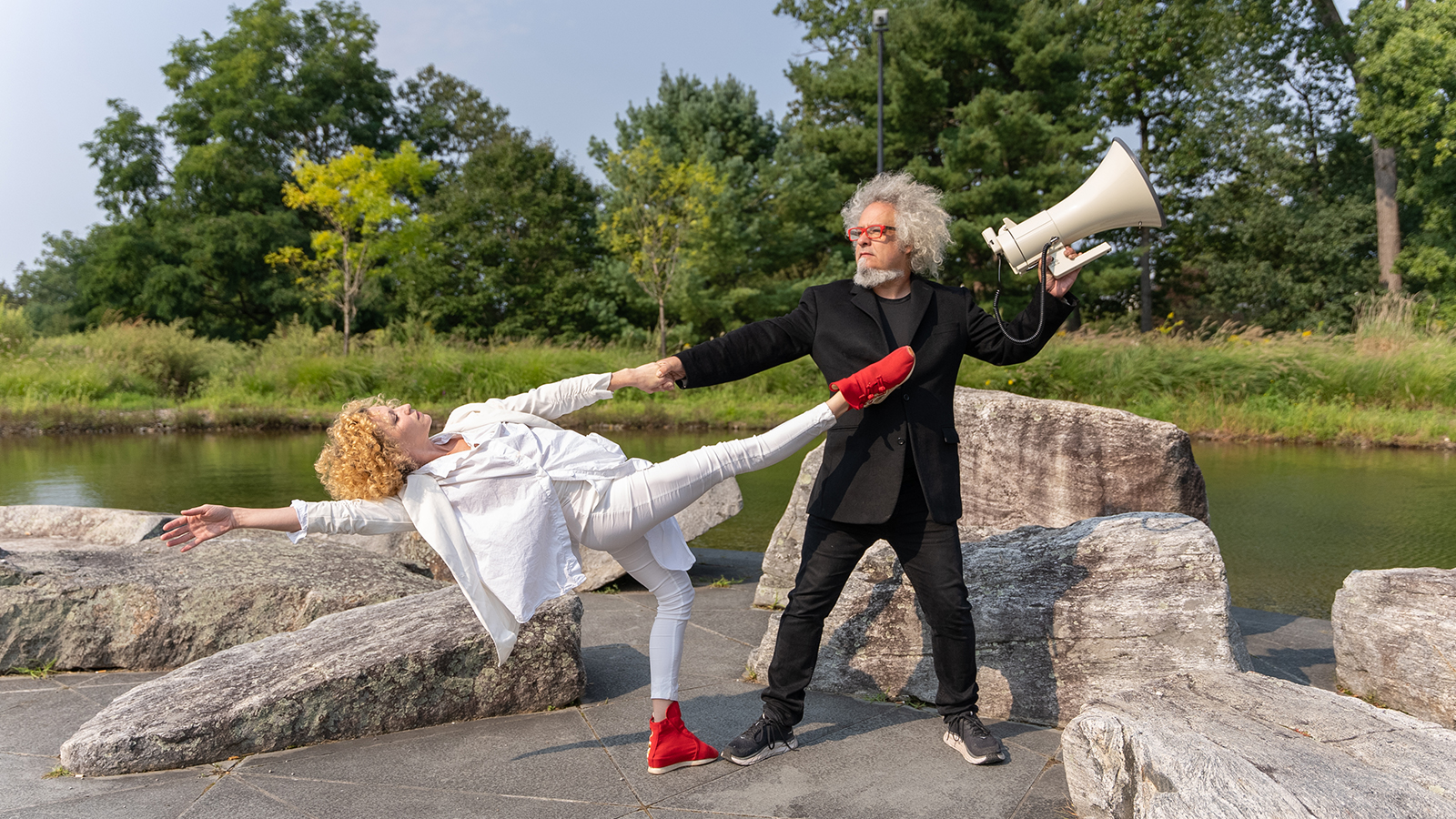 An Immersive Experience of Harmony, Poetry and Gesture, Featuring 50 Singers

ANNANDALE-ON-HUDSON, NY—The Fisher Center LAB (Fisher Center at Bard’s residency and commissioning program) and the Hannah Arendt Center for Politics and Humanities have teamed up to develop and present a new iteration of The Gauntlet, an immersive, community-inclusive choral work from artists Sxip Shirey and Coco Karol. Performed on and around the lawn of the Fisher Center for the Performing Arts, including on the Olafur Eliasson installation “the parliament of reality,” performances will take place on Friday, October 15 at 5:30 pm; Saturday, October 16 at 1 pm and 3 pm; and Sunday, October 17 at 5:30pm. Tickets are $25. Bard students may access tickets for $5 made possible by the Passloff Pass. To purchase or reserve tickets visit fishercenter.bard.edu, call 845-758-7900 (Mon–Fri 10am–5pm), or email [email protected]

An intimate, personal experience utilizing the exterior landscapes of the Fisher Center, audiences will be led through musical corridors of sonic architecture formed by the human voice. The Gauntlet is site-specific and bespoke. Each time it is performed, it takes on a new personality that reflects the performers, community, and location in which it is experienced. This iteration explores the theme “Spaces of Freedom,” in conjunction with the Hannah Arendt Center’s annual conference “Revitalizing Democracy: Sortition, Citizen Power, and Spaces of Freedom.”
“Freedom in the sense of the power to act and speak in public spaces is at the heart of Hannah Arendt’s political thinking,” said Roger Berkowitz, founder and director of the Hannah Arendt Center. “For Arendt, freedom happens in a public space. The Gauntlet is so exciting because it brings people together to experience thinking about freedom in a collective space. And the setting in Olafur Eliasson’s ‘parliament of reality’ provides a context of democratic spaces in which to experience thinking about freedom to act in the practice of self-government. I can’t think of a better way to conclude the Arendt Center’s conference on ‘Revitalizing Democracy and Spaces of Freedom.’”

The libretto, written by Shirey and Karol, is comprised of text generated from 20 “movement interviews” with local activists, organizers, artists, scholars, elected officials, and citizens, conducted by Karol as a way to explore individual and collective experiences on the theme of freedom. The Gauntlet will bathe audiences in waves of harmony, poetry and gesture, sung by a choir of 50 singers, assembled from all corners of the Bard College and Hudson Valley community. Audiences are led through the performance by four dancers (Karol, Miguel Angel Guzmán, Effy Grey, and Remi Harris).

Shirey composes the score utilizing melodies and harmonies that are passed from singer to singer in a chain of exchange, creating a “gauntlet” of sound and story, exchanged through the immersive performance as audience members flow through the pathways of sound. Says Shirey about the process, “I am constantly imagining how the audience will hear these stories as a rush of words flowing by, in exchange from singer to singer. The hope is to write grounded phrases and fractile melodies that bloom the minds of the listener.”

Sxip Shirey is a composer/producer/director/performer based in NYC. He is the composer and MD for the theater/circus arts production “LIMBO”, developed by Melbourne based Strut N Fret Productions House and London’s Underbelly, which has brought him all over the world from The Sydney Opera House to South Bank Center in London to playing Madonna’s Birthday Party in the Hamptons. Shirey teaches workshops in “Text and Object-Oriented Composition” at Norwegian Theater Academy, Fredrikstad, Norway, which Shirey considers “The Black Mountain College of NOW.” Shirey toured as the opening act for the Dresden Dolls, has collaborated often with Amanda Palmer, and was a member of the band Luminescent Orchestrii. Shirey has played Appalachian music for gypsies in Transylvania and gypsy music for Appalachians in West Virginia. Shirey has presented at TED (2008), is a 2011 United States Artist Fellow. He wrote music for a short film, “Statuesque,” written/directed by Neil Gaiman, starring Bill Nighy, which premiered on Christmas Day on SKY TV, UK. He created music for the app-version of Shaun Tan’s book “Rules of Summer,” NSW Lothian Children's Books, 2013.  Shirey has also served as artist-curator in residence at National Sawdust, bringing in artists including Taylor Mac, Rhiannon Giddens, Ned Rothenberg, Baby Dee, Sarah Angliss, Theo Bleckmann, Todd Reynolds, Basil Twist, The Quintet of the Americas, and Lady Rizo. Shirey is currently working on the opera “No One Is Left Behind”, co-written with Paola Prestini, libretto by Winter Miller. Shirey is also working on the music for “Ocean Filibuster”, by playwright Lisa D’Amore, directed by Katie Pearl for the 2022 season of the American Repertory Theater in Boston. Shirey and his artistic partner Coco Karol have co-created Gauntlet performances for the Sydney Opera House, Rockefeller Center and in virtual 3-D format for Abu Dhabi NYU.

Coco Karol is a NY-based dancer/choreographer/artist who makes cross-disciplinary performances that invite conversations between personal and shared experiences. A performer, choreographer, hospice volunteer, and dedicated teacher, Coco is interested in how we create meaning and connection to others. For her, dance joins poetic and physical experiences. She holds a BFA from Tisch Dance NYU and an MFA from Hollins University. Among the choreographers she has danced for are Chris Elam/ Misnomer Dance Theater, Cherylyn Lavagnino/CLD, and Christopher Williams. Her choreography has been toured internationally and premiered in reputable New York venues such as Carnegie Hall, Symphony Space, Galapagos, Brooklyn Studios for Dance, and has been curated by AUNTS. She has worked with musicians including Bjork, Amanda Palmer, Sugar Vendil, Minna Choi/ MagikMagik, Lacy Rose, Alaina Ferris, and Inhyun Kim/ Ear to Mind; visual artists including Steven Sebring, Eve Bailey, Marcos Zotes, Benjamin Heller, and C. Finley. She is a SAFE® FLOOR spinal method movement coach. She teaches various dance and embodied inquiry techniques that she developed, including Movement Before Dialogue workshops such as, Gestures of Care, a movement and storytelling series for end-of-life care professionals. Ongoing works include ‘Movement Interviews’ (dance as inquiry), The Lullaby Project (oral histories/ physical archives), and The Gauntlet, community-inclusive choral performances with her artistic partner and husband, Sxip Shirey.


About Bard College
Founded in 1860, Bard College is a four-year, residential college of the liberal arts and sciences located 90 miles north of New York City. With the addition of the Montgomery Place estate, Bard’s campus consists of nearly 1,000 parklike acres in the Hudson River Valley. It offers bachelor of arts, bachelor of science, and bachelor of music degrees, with majors in more than 40 academic programs; graduate degrees in 11 programs; nine early colleges; and numerous dual-degree programs nationally and internationally. Building on its 161-year history as a competitive and innovative undergraduate institution, Bard College has expanded its mission as a private institution acting in the public interest across the country and around the world to meet broader student needs and increase access to liberal arts education. The undergraduate program at our main campus in upstate New York has a reputation for scholarly excellence, a focus on the arts, and civic engagement. Bard is committed to enriching culture, public life, and democratic discourse by training tomorrow’s thought leaders. For more information about Bard College, visit bard.edu.
###