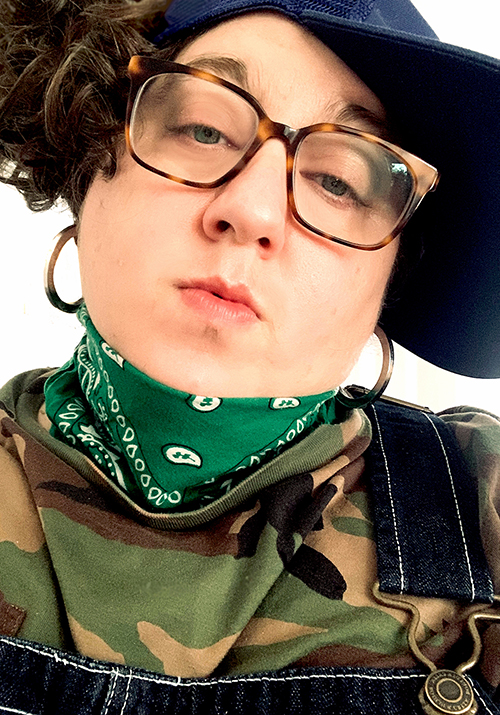 A biographical picture of Constantina Zavitsanos depicts them in overalls, camouflage, and paisley. Their skin is white and their hair is dark, curly, and half tucked under a hat. Photo by Allison Harris.

Annandale-on-Hudson, NY (September 27, 2021)—The Center for Curatorial Studies (CCS Bard) and Bard College’s Human Rights Project have named artist Constantina Zavitsanos as the 2021-22 recipient of the Keith Haring Fellowship in Art and Activism. Made possible by the Keith Haring Foundation, the Haring Fellowship is an annual award that brings a prominent scholar, activist, or practicing artist to teach and conduct research on Bard’s campus. Initially launched in 2014, the fellowship embodies the shared commitment of the College and the Foundation to imaginatively explore the complex connections between sociopolitical engagement and artistic practice.

Working in sculpture, performance, text, and sound, Zavitsanos deals in the material reproduction of debt, dependency, and means beyond measure. They are a widely recognized leader in investigating what is at stake for art and politics in a real encounter with disability and dependence—not as opposed to labor or autonomy or life, they argue, but as an essential starting point for understanding them. "I’m interested," they told an interviewer in 2019, "in the disfiguring that disabled life offers to consensus-based reality." Their work has been exhibited in New York at the Brooklyn Museum, New Museum, Artists Space, and The Kitchen and, internationally, at Arika in Glasgow, Scotland; Museum für Moderne Kunst in Frankfurt; and Haus der Kulturen der Welt in Berlin. With Park McArthur, they coauthored “Other Forms of Conviviality” in the journal Women & Performance (Routledge, 2013) and “The Guild of the Brave Poor Things” in Trap Door: Trans Cultural Production and the Politics of Visibility (MIT Press, 2017). In 2019, they co-organized the cross-disability arts events and study sessions, “I wanna be with you everywhere” at Performance Space New York and the Whitney. Zavitsanos is the 2021 recipient of the Roy Lichtenstein Award from the Foundation for Contemporary Arts in New York. They hold an MFA from the Pennsylvania Academy of the Fine Arts and a BFA from Millersville University.

“Fostering new scholarship and dialogue within the graduate and undergraduate programs, the Keith Haring Fellowship is an innovative, cross-disciplinary initiative that brings the most thought-provoking and engaged practitioners from around the world to Bard. Now in its eighth iteration, the fellowship’s mission has become ever more significant as we collectively reaffirm the power of art to interrogate contemporary realities and foster change,” said Tom Eccles, Executive Director of the Center for Curatorial Studies, Bard College.

"With humor, passion, subtlety, and an extraordinary ability to hold opposed ideas in productive tension with one another, Tina Zavitsanos is a dynamic teacher and practices what they teach as both an artist and an activist," said Thomas Keenan of Bard's Human Rights Project. "Perhaps more than anyone else in this moment, they have made a complex re-thinking of capability and disability an inescapable part of any rigorous practice at the intersection of art and justice."

Zavitsanos’ appointment follows that of Ama Josephine B. Johnstone, who was named the 2020-21 Fellow. Additional details on the Keith Haring Fellowship in Art and Activism follows below, with more information on previous fellows found at ccsbard.edu.

About CCS Bard and the Human Rights Project at Bard College
Bard College seeks to realize the best features of American liberal arts education, enabling individuals to think critically and act creatively based on a knowledge and understanding of human history, society, and the arts. Two pioneering programs developed under this mission are the Center for Curatorial Studies (CCS Bard) and the Human Rights Project.

Founded in 1990, CCS Bard is the leading international graduate program dedicated exclusively to curatorial studies, a field exploring the historical, intellectual, and social conditions that inform exhibition-making. With the Marieluise Hessel Collection of Contemporary Art at its core, alongside an extensive and growing library and archival holdings, CCS Bard has served as an incubator for the most experimental and innovative practices in artistic and curatorial practice. Broadly interdisciplinary, CCS Bard encourages students, faculty, and researchers to question the critical and political dimension of art and its social significance.

CCS Bard and the Human Rights Project have collaborated since 2009 on the development of seminars, workshops, research projects, and symposia aimed at exploring the intersections between human rights and the arts. While academic in nature, this research and teaching draws heavily on the realm of practice, involving human rights advocates, artists, and curators.

About the Keith Haring Foundation
Keith Haring (1958-1990) generously contributed his talents and resources to numerous causes during his life. He conducted art workshops with children, created logos and posters for public service agencies, and produced murals, sculptures, and paintings to benefit health centers and communities impacted by systemic inequity. In 1989, Haring established a foundation to ensure that his philanthropic legacy would continue indefinitely.

The Keith Haring Foundation makes grants to not-for-profit entities that engage in charitable and educational activities. In accordance with Keith’s wishes, the Foundation concentrates its giving in two areas: the support of organizations which enrich the lives of young people and the support of organizations which engage in education, prevention, and care with respect to AIDS and HIV infection. The Foundation additionally maintains a collection of Haring’s art and archives and funds exhibitions, programming, and publications that serve to contextualize and illuminate the artist’s work and philosophy. www.haring.com.