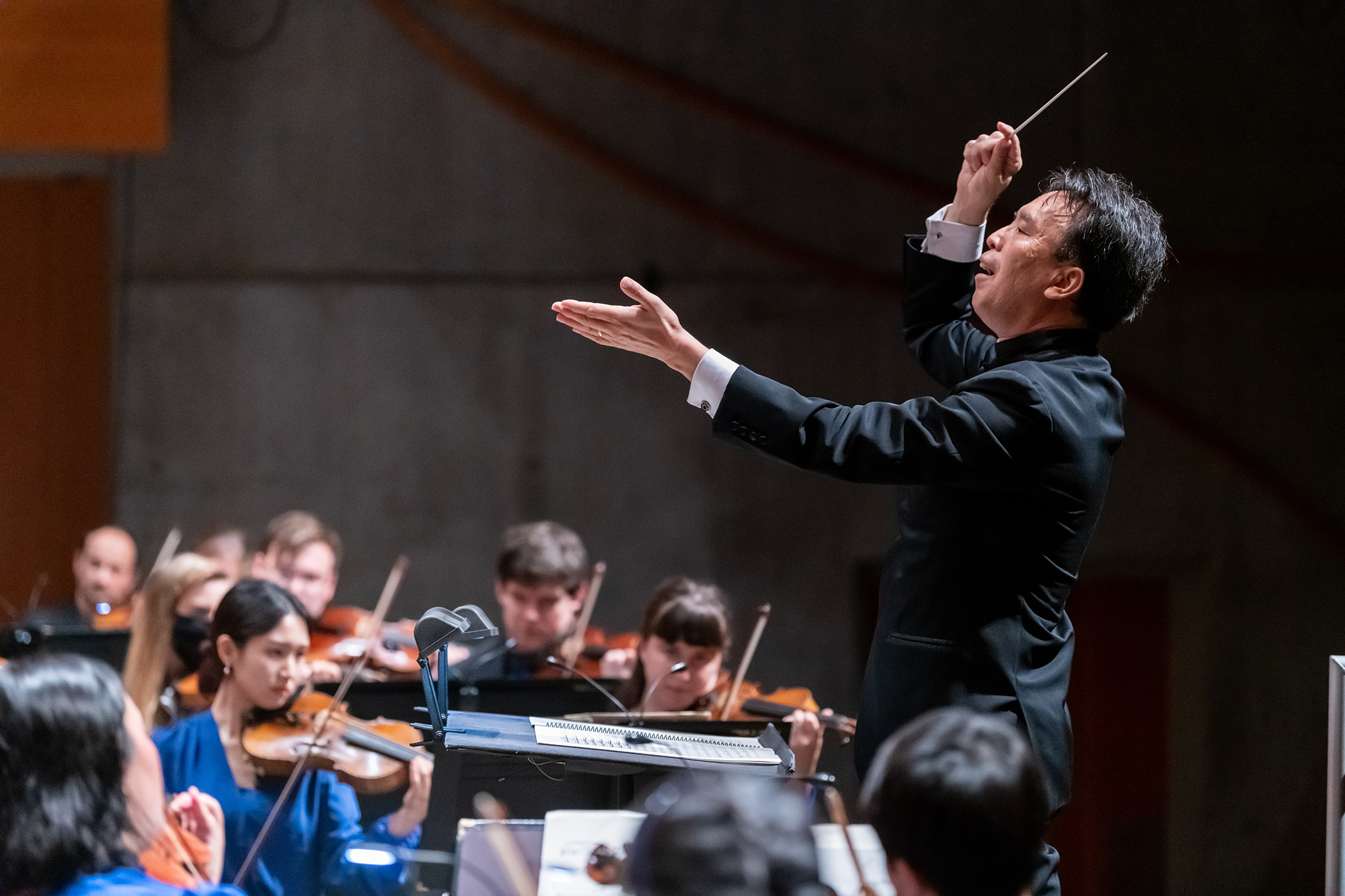 The US-China Music Institute of the Bard College Conservatory of Music presents The Sound of Spring: A Chinese New Year Concert conducted by Director of the US-China Music Institute Jindong Cai with The Orchestra Now (TŌN) performing. This special annual event, marking one of the most important holidays in the Chinese lunar calendar, showcases some of the best Chinese American artists and solo artists in America today, Chinese music, and traditional instruments. Performances will take place on Friday, January 28, 2022 at 8pm in The Richard B. Fisher Center for the Performing Arts at Bard College and on Sunday, January 30, 2022 at 3pm in the Rose Theater of Jazz at Lincoln Center’s Frederick P. Rose Hall in New York City. To purchase tickets for the January 28 Fisher Center concert, visit fishercenter.bard.edu, call 845-758-7900 (Mon-Fri 10am-5pm), or email [email protected]. For tickets to the January 29 Lincoln Center concert, please visit ticketing.jazz.org, or call 212-721-6500.

This year’s concert will celebrate the Chinese Year of the Tiger. As we have done with great success in our previous concerts, we aim to create the most authentic Chinese New Year musical event to reflect both traditional and contemporary music of China. Amazing artists and exciting music, like the most played Chinese symphonic piece, Yellow River Concerto, will inspire the audience to overcome obstacles and meet the future with hope.

The first half of the program features “Ode to Pear Blossoms” from The Royal Consort of Tang, a newly created Peking opera, which combines modern sounds with traditional form, as well as two pieces honoring the great Yellow River, which has been referred to as the cradle of Chinese civilization and has a strong place in the cultural imagination. The second half of the concert showcases the lyrical sounds of the traditional Chinese pipa, the exciting suona, and beautiful vocal music in celebration of the Chinese New Year and its spirit of family, togetherness, and looking ahead with optimism.

“This program represents a selection of pieces that show how Chinese music and Western music can interact with one another, from the formal elements of the traditional instruments and the modern Western orchestra, to the musical elements of diverse compositional styles, to the thematic elements of setting, history, and story-telling,” writes Jindong Cai. “Music transcends culture, and I always say that it is the best way for people to understand one another, no matter who they are or where they are from. Obstacles are all around us, both from nature and from the political environment. But through music we have a language that can connect people together and to help us see beyond our differences.”

Conductor Jindong Cai is the director of the US-China Music Institute, professor of music and arts at Bard College, and associate conductor of Bard’s The Orchestra Now. Before coming to Bard, Cai was a professor of performance at Stanford University. Over the 30 years of his career in the United States, Cai has established himself as an active and dynamic conductor, scholar of Western classical music in China, and leading advocate of music from across Asia. At Bard, Cai founded the annual China Now Music Festival. In its first three seasons, China Now presented new works by some of the most important Chinese composers of our time, with major concerts performed by The Orchestra Now at Bard’s Fisher Center for the Performing Arts, Lincoln Center, Carnegie Hall, and Stanford University. In 2019, the festival premiered a major new work by Pulitzer Prize–winning composer Zhou Long, Men of Iron and the Golden Spike—a symphonic oratorio, in commemoration of the Chinese railroad workers of North America on the 150th anniversary of the completion of the Transcontinental Railroad.

Song Feihong is the daughter of Song Baoluo, a famous Peking Opera artist who used to sing for the last emperor in China. She became a cultural ambassador through years of dedication to teaching and sponsoring cultural events in the Chinese community. She has devoted more than 200 hours a year at different schools demonstrating Chinese culture. Her successful bookstore, the New China Bookstore, is located in Philadelphia.

Yazhi Guo graduated with distinction from the Central Conservatory of Music in Beijing and was invited to stay on and teach. Widely known as the best suona player in Asia, he has won many international awards including the Grand Prize at New York’s International ProMusicis Award (1998). He was named by the Ministry of Culture as one of China’s most outstanding musicians, and was invited to give a solo performance with suona and saxophone for the heads of states during United States President Clinton’s visit in Beijing in 1998. In 90s, he also recorded the original songs for more than 100 films and popular TV series. In 1999, Guo was appointed as the Principal Suona by the Hong Kong Chinese Orchestra. Since then, he has performed with many orchestras around the world including Orchestra de la Suisse Switzerland, South Korea Daejeon Philharmonic Orchestra, Belgium’s Flanders Symphony Orchestra, Malaysia Chinese Orchestra, Singapore Chinese Orchestra, National Chinese Orchestra of Taiwan, among others. In 2012, he received the Hong Kong Award for Best Artist. That same year, he relocated to Boston to explore jazz at Berklee College of Music, where received an artist diploma in 2015. Guo is a multi-instrumentalist, specializing in woodwind, and an innovator who invented the “Flexible Core of Suona” that solved the problem of suona playing complicated modulations and temporary inflexions, allowing it to play in orchestras, and significantly broadening the expressive force of the instrument. He is currently a visiting artist teaching master classes at the Philadelphia University of the Arts and Berklee College of Music.

Prize-winning pianist Xiaofu Ju is currently pursuing his Bachelor of Music Degree at The Juilliard School under the tutelage of Yoheved Kaplinsky. In recent seasons, Ju has performed with China Philharmonic, Beijing Symphony, Xi’an Symphony and Jiangsu Symphony as a soloist. In 2021, he premiered Philip Glass Concerto No.3 at MISA festival in Shanghai (China premiere). Since his orchestral debut at age 14 with Shanghai Philharmonic, where he performed Beethoven Piano Concerto No.3, he has successfully played with orchestras including Wiener Hofburg Orchester, China Central Opera House, Shanghai Philharmonic, Shanghai Opera House, Japan Gunma Youth Symphony, Russian Ке́меров National Symphony, Jiangsu Symphony, and the Hong Kong Youth Philharmonic.

American soprano, Esther Maureen Kelly, is at home performing in operas and concerts around the globe. She completed a Master of Music in Opera Performance at the University of Maryland as a member of the Maryland Opera Studio in the Spring of 2017, and has since been based out of Dallas, Texas. In recent seasons, she premiered the role of Maddy in Jonathan Shin’s All Things Shall Pass, and performed as Diane in Orphée aux enfers, both Amore and Euridice in Orfeo ed Euridice, Female Chorus in The Rape of Lucretia, the First Lady in Die Zauberflöte, and Michelle in the world premiere of Another Country. In addition to performing those roles, she also recently covered Alexandra in Regina and studied Antonia in Les Contes d’Hoffmann. During the summer of 2019, she returned to perform with the iSING! International Young Artist Festival.

Baritone José Rubio’s recent international operatic engagements have included debuts at the Berlin Staatsoper, the Elbphilharmonie concert hall in Hamburg, and in Vienna at the Ronacher Theater. He is among the first westerners to sing leading roles in China in contemporary mandarin language operas, which have led to his debuts at the National Center for the Performing Arts in Beijing, the Shanghai Grand Theater, and the Jiangsu Grand Theater in Nanjing. His operatic credits include the title roles in Il Barbiere di Siviglia, Don Giovanni, Le Nozze di Figaro, and Gianni Schicchi. Other credits include Escamillo in Carmen, Enrico in Lucia di Lammermoor, Marcello and Schaunard in La Bohème, Guglielmo in Così fan Tutte, Tarquinius in The Rape of` Lucretia, Tonio in I Pagliacci, Alfio in Cavalleria Rusticana, Hannah Before in As One, El Payador in Maria de Buenos Aires, Le Mari in Les Mamelles de Tiresias, Dr. Rappaccini in La hija de Rappaccini and Dr. Falke in Die Fledermaus. His leading credits include principal roles for Cincinnati Opera, Seattle Opera, Portland Opera, Nashville Opera, Alamo City Opera, Asheville Lyric Opera, Tacoma Opera, Vashon Opera, and Juneau Lyric Opera. He has been a guest soloist with the Shenzhen Symphony Orchestra, the Suzhou Symphony Orchestra, Albany Symphony, Boise Philharmonic, Evansville Philharmonic, the Bellingham Symphony Orchestra, Philharmonia Northwest, and the Rogue Valley Symphony. In recital he has appeared at Carnegie Hall and the Tianjin Julliard School.

The Orchestra Now (TŌN) is a group of vibrant young musicians from across the globe who are making orchestral music relevant to 21st-century audiences. They are lifting the curtain on the musicians’ experience and sharing their unique personal insights in a welcoming environment. Conductor, educator, and music historian Leon Botstein founded TŌN in 2015 as a master’s degree program at Bard College, where he also serves as president. The orchestra is in residence at Bard’s Richard B. Fisher Center for the Performing Arts, presenting multiple concerts there each season as well as taking part in the annual Bard Music Festival. It also performs regularly at the finest venues in New York and beyond, including Carnegie Hall, Lincoln Center, the Metropolitan Museum of Art, and elsewhere. The orchestra has performed with many distinguished conductors, including Fabio Luisi, Neeme Järvi, Gerard Schwarz, and JoAnn Falletta. theorchestranow.org

About the US-China Music Institute
The US-China Music Institute was founded in 2017 by conductor Jindong Cai and Robert Martin, founding director of the Bard College Conservatory of Music, with the mission to promote the study, performance, and appreciation of music from contemporary China and to support musical exchange between the United States and China. In partnership with the prestigious Central Conservatory of Music in Beijing, the Institute has embarked on several groundbreaking projects including the first degree-granting program in Chinese instrument performance in a U.S. conservatory. barduschinamusic.org

About Bard College
Founded in 1860, Bard College is a four-year, residential college of the liberal arts and sciences located 90 miles north of New York City. With the addition of the Montgomery Place estate, Bard’s campus consists of nearly 1,000 parklike acres in the Hudson River Valley. It offers bachelor of arts, bachelor of science, and bachelor of music degrees, with majors in nearly 40 academic programs; graduate degrees in 13 programs; eight early colleges; and numerous dual-degree programs nationally and internationally. Building on its 161-year history as a competitive and innovative undergraduate institution, Bard College has expanded its mission as a private institution acting in the public interest across the country and around the world to meet broader student needs and increase access to liberal arts education. The undergraduate program at our main campus in upstate New York has a reputation for scholarly excellence, a focus on the arts, and civic engagement. Bard is committed to enriching culture, public life, and democratic discourse by training tomorrow’s thought leaders. For more information about Bard College, visit bard.edu.
###