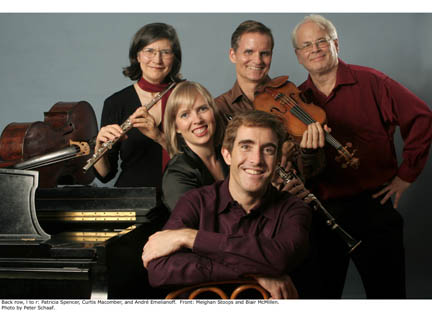 ANNANDALE-ON-HUDSON, N.Y.— Exploiting the creativity of the region and of Bard College faculty, graduates, and current students, the Da Capo Chamber Players offer their annual “Celebrate Bard!” program, on Wednesday, March 17, in Bard Hall at 8 p.m. There will be a reception following the concert. The performance is free and open to the public. No reservations are necessary.

Since 1970, the Naumburg Award–winning, internationally acclaimed Da Capo Chamber Players has built a reputation on working closely with composers, representing an enormous spectrum of compositional styles. Da Capo’s five distinguished artists bring years of creative insight, involvement, and artistic leadership to performances of today’s repertoire, including more than 100 works written especially for the group. Da Capo searches for the best new compositions and gives them a unique and dedicated attention, resulting in acclaimed performances consistent with the highest musical standards found in performances of traditional repertoire. Further, the group is committed to bringing American music to a variety of cultures and to presenting music from all over the world to American audiences. In January 2009, the group celebrated the 100th birthday of Elliott Carter with a performance of his Tempo e tempi; the same concert included a 100th birthday salute to Olivier Messiaen with a performance of his Quatuor pour la fin du temps. The 2010-2011 season, marking the group’s 40th anniversary, will include world premieres by George Tsontakis and Keith Fitch, and the New York premiere of Shirish Korde’s chamber opera Bandit Queen. Da Capo has twice been featured at Moscow Autumn and St. Petersburg Sound Ways festivals, combining American works with seven by Russian composers (six written for Da Capo) and a signature work, Schoenberg’s Pierrot Lunaire. For more than two decades, the group has been in residence at Bard College, and since 2006 has been ensemble in residence with the Composition Program of The Bard College Conservatory of Music.

Hailed as “one of the most successful woman composers of all time” in the New Yorker magazine, Joan Tower was the first woman to receive the Grawemeyer Award in Composition in 1990. She was inducted in 1998 into the prestigious American Academy of Arts and Letters, and into the Academy of Arts and Sciences at Harvard University in the fall of 2004. She was the first composer chosen for the ambitious new Ford Made in America commissioning program, a collaboration of the League of American Orchestras (at that time, the American Symphony Orchestra League) and Meet the Composer. In October 2005, the Glens Falls Symphony Orchestra presented the world premiere of Tower’s 15-minute orchestral piece Made in America. The Nashville Symphony and conductor Leonard Slatkin recorded Made in America, Tambor, and Concerto for Orchestra for the Naxos label. The top-selling recording won three 2008 Grammy awards: Best Classical Contemporary Composition, Best Classical Album, and Best Orchestral Performance. Tower has added conductor to her list of accomplishments, with engagements at the American Symphony, Hudson Valley Philharmonic, Scotia Festival Orchestra, Anchorage Symphony, Kalisto Chamber Orchestra, and another eight of the Made in America orchestras, among others. Since 1972, Tower has taught at Bard College. She recently concluded her 10-year tenure as composer in residence with the Orchestra of St. Luke’s, a title she has held at the Deer Valley Music Festival in Utah since 1998, as well as at the Yale/Norfolk Chamber Music Festival for eight years. Other accolades include the 1998 Delaware Symphony’s Alfred I. DuPont Award for Distinguished American Composer, the 2002 Annual Composer’s Award from the Lancaster Symphony, and an honorary degree from the New England Conservatory (2006). “Tower has truly earned a place among the most original and forceful voices in modern American music” (Detroit News).

Educated at Haverford College and the Yale School of Music, composer and performer Richard Teitelbaum is known principally for live electronic and interactive computer music composition. His compositions have been performed in Berlin, Paris, Amsterdam, London, Lisbon, Tokyo, Chicago, Minneapolis, New York, and elsewhere around the world. A founder, with Frederic Rzewski and Alvin Curran, of Musica Elettronica Viva in Rome in 1966, he has composed works in a variety of genres, including compositions for the Japanese shakuhachi master Katsuya Yokoyama, pianists Aki Takahashi and Ursula Oppens, a choral piece for twenty Japanese Buddhist monks, and multimedia works with Nam June Paik, Joan Jonas, and others. Recordings include Golem: An Interactive Opera, Tzadik CD (U.S.A.); Live at Merkin Hall: Duets with Anthony Braxton, Music and Arts CD (U.S.A.); Concerto Grosso, Hat Art CD (Switzerland); Run Some By You, Wego CD (Germany); and Cyberband, Moers CD, Germany. He is the recipient of numerous awards, including Prix Ars Electronica from Austrian Radio and Television (1987); commissions from the Venice Biennale, German Radio, National Endowment for the Arts, New York State Council on the Arts, Mary Flagler Cary Trust, Meet the Composer/NEA Commissioning Program, and Rockefeller Foundation; and Fulbright research grants to Italy and Japan. Teitelbaum has taught at Vassar College, California Institute of the Arts, Antioch College, and York University, Toronto. He is currently on the faculty of the Milton Avery Graduate School of the Arts and associate professor of music at Bard College.

Born and raised in North Canton, Ohio, Jesse Alexander Brown (’10) developed his interest in music relatively late when he wrote his first piece, Scherzo, in 2005 for his high school orchestra. He started college at Case Western Reserve University, but transferred to Bard College in 2007 in order to pursue a music composition major. He will graduate in May with a bachelor of arts degree in music. Brown writes with simple structures and forms, drawing inspiration from the music of video games from such composers as Kō Ōtani (Shadow of the Colossus), Jack Wall (Myst III), and Nobuo Uematsu (Final Fantasy). Brown recently completed his first opera, When We Dead Awaken, an adaptation of the play by Henrik Ibsen, and is premiering the work in April 2010 at Bard College. He is currently studying with Kyle Gann; previous teachers include Keith Fitch and George Tsontakis.

Erica Ball (’10) is a multitalented musician–violinist, pianist, and composer. As a composer Ball’s works have been played by numerous ensembles, including the Walden Players, Bard College Orchestra, Da Capo Chamber Players, Colorado Quartet, and the International Contemporary Ensemble. She is currently pursuing a double major in environmental studies with a concentration in economics and in music with a concentration in composition at Bard College, with an early graduation date of December 2010. She studies chamber music with Luis Garcia- Renart, violin with D. Lydia Redding, piano with Blair McMillen, and composition with Joan Tower. She has been invited to be a guest composer on the Deer Valley Music Festival’s Emerging Quartets and Composers Series in the summer of 2010.

Bruce Wolosoff (’77) began his musical studies on piano at a young age, playing in rock, jazz, and fusion bands throughout his teen years while simultaneously pursuing his “serious” studies as a classical pianist. He studied classical piano for 16 years with German Diez and later studied with distinguished pianist Richard Goode. Wolosoff holds degrees from Bard College, where he worked with Joan Tower, and the New England Conservatory of Music. In addition to his classical studies, Wolosoff studied jazz piano and harmony for many years with Charlie Banacos, and jazz piano and composition with Jaki Byard. Wolosoff’s principal studies in composition and orchestration were with Lawrence Widdoes. At the age of 30, he stopped performing in public to devote his energies more fully to his work as a composer. He has received five commissions to create new works for the Smithsonian, and has also written for the Columbus Symphony, Minnesota Ballet, Carpe Diem String Quartet, violinist Charles Wetherbee, oboist Rudy Vrbsky, Danish recorder virtuoso Michala Petri, and the Lark Quartet, among others. Wolosoff’s chamber opera Madimi was performed by the Center for Contemporary Opera at Symphony Space in New York City. Songs without Words (18 divertimenti for string quartet), composed for the Carpe Diem String Quartet, are now available on the Naxos label and are being choreographed by Ann Reinking. In addition to his work as a composer, Bruce Wolosoff is an innovative music teacher who spends three weeks each year in residence at the Hayground School in Bridgehampton, where he runs a creative orchestra of young students who compose, conduct, and perform their own music.

Adrienne Elisha holds degrees from Indiana University (Bloomington), where she studied composition with John Eaton, Donald Erb, Bernhard Heiden, Juan Orrego-Salas, and Leonard Bernstein. While at Indiana she studied violin with Thaddeus Wronski, Henryk Kowalski, and Franco Gulli. She also received a certificate/diploma in viola performance from the Cleveland Institute of Music, where she was an assistant to Heidi Castleman. More recently, she was winner of the 2007 Thayer Award in Music Composition and received her Ph.D. in composition at the University of Buffalo, where she was a Presidential Doctoral Fellow, working with David Felder. Ms. Elisha has received numerous grants and commissions, including Meet the Composer, National Music Teachers' Association (which named her “Ohio Composer of the Year 1997”), the Fortnightly Music Club of Cleveland, Cleveland Chamber Music Society, newEar Ensemble (Kansas City), and the American Music Center. Her works have been featured nationally and internationally at numerous concerts and music festivals, including, June in Buffalo, Colorado Springs New Music Symposium, Chintimini Chamber Music Festival, and International Bartók Festival in Szombathely, Hungary, where she has performed her own solo and chamber works as well as works by other composers. Adrienne Elisha is principal violist with Cleveland Chamber Symphony, Center for 21st Century Music Ensemble, and June in Buffalo Chamber Ensemble and frequently performs with Boston Modern Orchestra Project. She is currently visiting assistant professor of composition at Vassar College.

For high-resolution images go to www.bard.edu/news/press.

These concerts are made possible, in part, through the generosity of the Homeland Foundation and the Leon Levy Endowment at Bard College. For further information about the program, call The Bard Center at 845-758-7425.
March 2, 2010