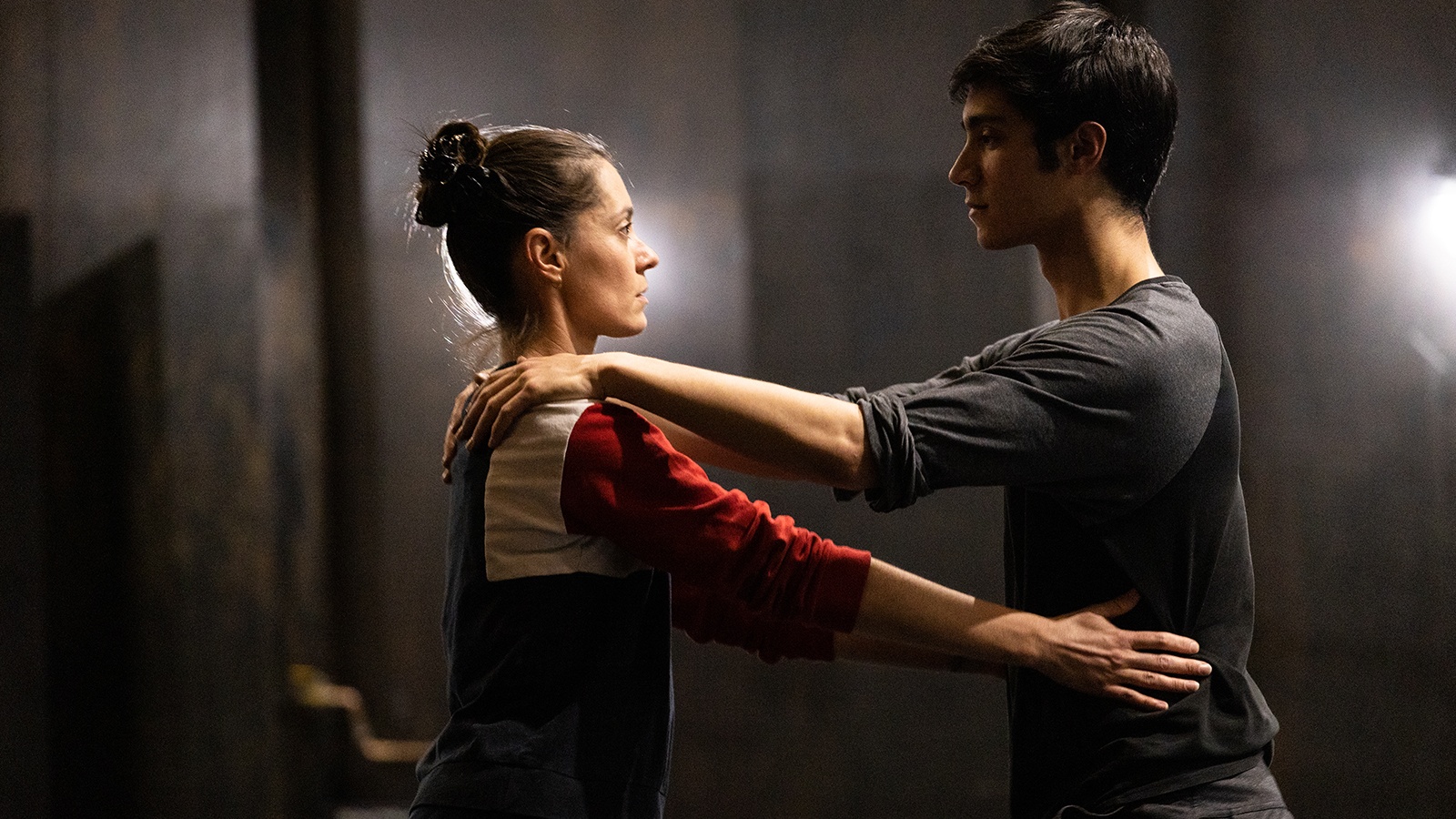 Song of Songs Is Commissioned by the Fisher Center at Bard, Where Tanowitz Is Choreographer-in-Residence, and Which Also Commissioned and Premiered Her Renowned Four Quartets
The Fisher Center at Bard, which has become one of the world’s preeminent sources of major multidisciplinary performance works, presents a project that exemplifies its place on the cultural landscape: a new dance setting of the biblical Song of Songs created by the Fisher Center’s internationally celebrated choreographer-in-residence, Pam Tanowitz, with new music from Pulitzer Prize-winning composer David Lang, making its world premiere July 1-3 as part of the 2022 edition of the Bard SummerScape festival.

Spiritual and erotic, playful and mysterious, Song of Songs (also known as The Song of Solomon) is perhaps the greatest of all love poems—a hymn of yearning, steeped in images from the natural world. It has inspired artists and lovers for millennia; some scholars argue that the entire tradition of Western love poetry springs from its glorious verses. Based on this radiantly beautiful text, Tanowitz’s collaboration with Lang, in which she explores her Jewish identity, is a collage of movement, sound, and song that reimagines ancient rituals of love and courtship and holds the sacred and profane threads of the Song in perfect balance.

In addition to choreography by Tanowitz and music by Lang, Song of Songs features production design by Tanowitz and her longtime collaborators Reid Bartelme, Harriet Jung, and Clifton Taylor; sound design by Garth MacAleavey; music supervision by Caleb Burhans; and dramaturgy by Mary Gossy. Betsy Ayer is the production stage manager.

Song of Songs follows the resounding success of Tanowitz’s two previous Fisher Center commissions: I was waiting for the echo of a better day, chosen as one of The New York Times’s “Best of 2021,” and Four Quartets, which recently played at the Brooklyn Academy of Music and was, after its Fisher Center premiere, named “Best Dance Production of 2018” by the Times. The paper pronounced it “the greatest creation of dance theater so far this century.”

Pam Tanowitz, who is entering her fourth year as the Fisher Center’s choreographer-in-residence, says of the work, “I feel a deep personal connection with this work—an intimate, small-scale love story. In 2018, after my dad died, I started thinking about lineage, and Jewish identity, and wanted to make a piece that honors my father and my heritage, something I’ve never done. For me, the use of this text provides a framework to push myself artistically. I want to find a way to mirror the structure without being literal. I plan to deconstruct the duet form as I investigate how to give shape or feeling to a figure.”

David Lang explains, “It was Pam’s idea to make a big project that would be based on the biblical text Song of Songs.I responded to her suggestion by mapping out four different paths through the text, resulting in a new text for the music that I would write myself. Each of these paths applies a different literary filter to the original text, and each path tries to concentrate on the paradox that, for Judeo- Christian believers, the text is both a sensual description of the experiences of two lovers and, at the same time, a deeply spiritual exploration of a relationship with god. My hope is that, by examining this deep and powerful text from such different angles, these movements, taken together, may begin to reveal more of the original text’s emotional and spiritual powers.”

Bard SummerScape, described by The New York Times as “a hotbed of intellectual and aesthetic adventure” and as a producer of dance works that provide “reliable transcendence,” returns this year June 23 - August 14 and comprises eight weeks of live music, opera, dance, and theater. Additional highlights include the 32nd Bard Music Festival, Rachmaninoff and His World; a new production of Strauss’s The Silent Woman, directed by Christian Räth; and a new adaptation of Molière’s Dom Juan, directed by Ashley Tata; and more. More information about the 2022 festival is here.

Performance Schedule and Ticketing
Performances of Song of Songs take place July 1 at 8pm, July 2 at 5pm, and July 3 at 2pm in the Sosnoff Theater at the Fisher Center (Manor Ave, Annandale-On-Hudson, NY 12504). Tickets, starting at $25 ($5 for Bard students), can be purchased at fishercenter.bard.edu or 845-758-7900.

About Pam Tanowitz
Pam Tanowitz is a celebrated New York-based choreographer and collaborator known for her unflinchingly post-modern treatment of classical dance vocabulary. In 2000, she founded Pam Tanowitz Dance to explore dance- making with a consistent community of dancers. Tanowitz is currently the Fisher Center’s Choreographer in Residence.

About David Lang
David Lang embodies the restless spirit of invention as a passionate, prolific, and complicated composer. Lang is at the same time deeply versed in the classical tradition and committed to music that resists categorization, constantly creating new forms.

Lang is one of America's most performed composers. Many of his works resemble each other only in the fierce intelligence and clarity of vision that inform their structures. His catalog is extensive, and his opera, orchestra, chamber and solo works are by turns ominous, ethereal, urgent, hypnotic, unsettling and very emotionally direct. Much of his work seeks to expand the definition of virtuosity in music — even the deceptively simple pieces can be fiendishly difficult to play and require incredible concentration by musicians and audiences alike.

Lang's “Simple Song #3,” written as part of his score for Paolo Sorrentino's acclaimed film Youth, received many award nominations in 2016, including the Academy Award and Golden Globe. Recent works include his opera Prisoner of the State, co-commissioned by the New York Philharmonic, Rotterdam's de Doelen Concert Hall, London’s Barbican Centre, Barcelona’s l’Auditori, Bochum Symphony Orchestra, and Bruges Concertgebouw; his opera The Loser, which opened the 2016 Next Wave Festival at the Brooklyn Academy of Music; the Public Domain for 1000 singers at Lincoln Center’s Mostly Mozart Festival; and his chamber opera Anatomy Theater at Los Angeles Opera and at the PROTOTYPE Festival in New York. His 2008 composition The Little Match Girl Passion won the Pulitzer Prize for Music.

Lang's works are performed around the globe by prominent orchestras, ensembles, festivals, and venues. His music is used regularly for ballet and modern dance including works with such choreographers and companies as Twyla Tharp, the Paris Opera Ballet, the New York City Ballet, and Benjamin Millepied. Lang is the recipient of numerous honors and awards, including the Pulitzer Prize, an Academy Award and a Golden Globe nomination, Musical America's Composer of the Year, the Rome Prize, a Bessie Award, Obie Award, and a Grammy Award. Lang is co-founder and co-artistic director of New York's legendary music collective Bang on a Can. His work has been recorded on the Sony Classical, Harmonia Mundi, Teldec, BMG, Point, Chandos, Argo/Decca, and Cantaloupe labels, among others.

Commissioning funds for Song of Songs are provided by Jay Franke and David Herro, with additional support received from the O’Donnell Green Music and Dance Foundation. The Fisher Center on behalf of Pam Tanowitz Dance received a 2020 NDP Finalist Grant Award for Song of Songs, made possible by the New England Foundation for the Arts with funding from the Doris Duke Charitable Foundation and the Andrew W. Mellon Foundation, to address sustainability needs during COVID-19.

About the Fisher Center
The Fisher Center develops, produces, and presents performing arts across disciplines through new productions and context-rich programs that challenge and inspire. As a premier professional performing arts center and a hub for research and education, the Fisher Center supports artists, students, and audiences in the development and examination of artistic ideas, offering perspectives from the past and present as well as visions of the future. The Fisher Center demonstrates Bard’s commitment to the performing arts as a cultural and educational necessity. Home is the Fisher Center for the Performing Arts, designed by Frank Gehry and located on the campus of Bard College in New York’s Hudson Valley. The Fisher Center offers outstanding programs to many communities, including the students and faculty of Bard College, and audiences in the Hudson Valley, New York City, across the country, and around the world. Building on a 162-year history as a competitive and innovative undergraduate institution, Bard is committed to enriching culture, public life, and democratic discourse by training tomorrow’s thought leaders.

The Center presents more than 200 world-class events and welcomes 50,000 visitors each year. The Fisher Center supports artists at all stages of their careers and employs more than 300 professional artists annually. The Fisher Center is a powerful catalyst of art-making regionally, nationally, and worldwide. Every year it produces 8 to 10 major new works in various disciplines. Over the past five years, its commissioned productions have been seen in more than 100 communities around the world. During the 2018–2019 season, six Fisher Center productions toured nationally and internationally. In 2019, the Fisher Center won the Tony Award for Best Revival of a Musical for Daniel Fish’s production of Oklahoma!, which began its life in 2007 as an undergraduate production at Bard and was produced professionally in the Fisher Center’s SummerScape Festival in 2015 before transferring to New York City.