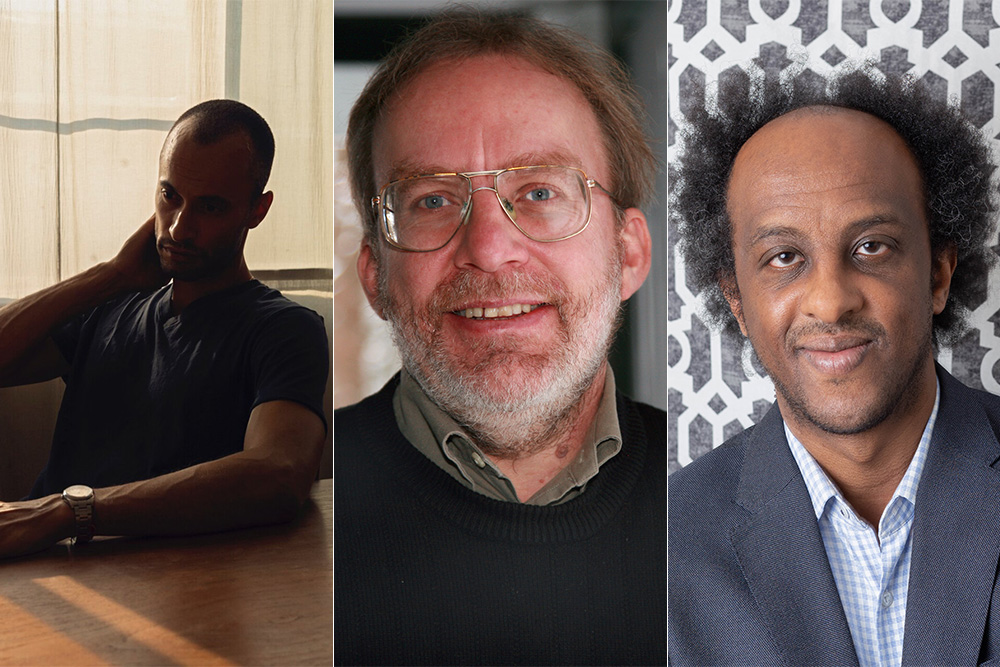 
ANNANDALE-ON-HUDSON, N.Y.—The John Simon Guggenheim Memorial Foundation has awarded three Bard faculty members 2022 Guggenheim Fellowships. John D. and Catherine T. MacArthur Professor of the Humanities and Director of the Written Arts Program Dinaw Mengestu and Richard B. Fisher Professor of Literature at Bard College at Simon’s Rock Peter Filkins have been named 2022 Guggenheim Fellows. Incoming Hannah Arendt Center Senior Fellow and Visiting Professor of Humanities Thomas Chatterton Williams, who will begin teaching at the College in spring 2023, has also been selected.  Chosen through a rigorous review process from nearly 2,500 applicants, Mengestu, Filkins, and Williams were among a diverse group of 180 exceptional artists, writers, scholars, and scientists to receive a 2022 Fellowship. Mengestu was awarded a Fellowship for his work in fiction, Filkins for his work in biography, and Williams for his work in general nonfiction.

“We are proud of and grateful for Bard’s 2022 Fellows, who represent an astonishing range of achievement,” said Bard Dean of the College Deirdre d’Albertis. “Living and learning alongside colleagues who have been recognized this year–and in the past–by the Guggenheim Foundation inspires us all to celebrate the vital work of artists, writers, and scholars in our community.”

“Now that the past two years are hopefully behind all of us, it is a special joy to celebrate the Guggenheim Foundation’s new class of Fellows,” said Edward Hirsch, President of the Guggenheim Foundation and 1985 Fellow in Poetry. “This year marks the Foundation’s 97th annual Fellowship competition. Our long experience tells us what an impact these annual grants will have to change people’s lives. The work supported by the Foundation will aid in our collective effort to better understand the new world we’re in, where we’ve come from, and where we’re going. It is an honor for the Foundation to help the Fellows carry out their visionary work.”

In all, 51 scholarly disciplines and artistic fields, 81 different academic institutions, 31 states and the District of Columbia, and four Canadian provinces are represented in this year’s class of Fellows, who range in age from 33 to 75. Close to 60 Fellows have no full-time college or university affiliation. Many Fellows’ projects directly respond to issues like climate change, pandemics, Russia, feminism, identity, and racism.

Created and initially funded in 1925 by Senator Simon and Olga Guggenheim in memory of their son John Simon Guggenheim, the John Simon Guggenheim Memorial Foundation has sought since its inception to “further the development of scholars and artists by assisting them to engage in research in any field of knowledge and creation in any of the arts, under the freest possible conditions.” Since its establishment, the Foundation has granted nearly $400 million in Fellowships to over 18,000 individuals, among whom are more than 125 Nobel laureates, members of all the national academies, winners of the Pulitzer Prize, Fields Medal, Turing Award, Bancroft Prize, National Book Award, and other internationally recognized honors. The great range of fields of study is a unique characteristic of the Fellowship program. For more information on the 2022 Fellows, please visit the Foundation’s website at gf.org.

Dinaw Mengestu is the author of three novels, all of which were named New York Times Notable Books: All Our Names(Knopf, 2014), How To Read the Air (Riverhead, 2010), and The Beautiful Things That Heaven Bears (Riverhead, 2007). A native of Ethiopia who came with his family to the United States at the age of two, Mengestu is also a freelance journalist who has reported about life in Darfur, northern Uganda, and eastern Congo. His articles and fiction have appeared in the New York Times, New Yorker, Harper’s, Granta, Jane, and Rolling Stone. He is a 2012 MacArthur Fellow and recipient of a Lannan Literary Fellowship for Fiction, National Book Foundation 5 Under 35 Award, Guardian First Book Award, and Los Angeles Times Book Prize, among other honors. He was also included in The New Yorker’s “20 under 40” list in 2010. In its cover page review of All Our Names, the New York Times Book Review said “You can’t turn the pages fast enough, and when you’re done, your first impulse is to go back to the beginning and start over . . . While questions of race, ethnicity, and point of origin do crop up repeatedly in Mengestu’s fiction, they are merely his raw materials, the fuel with which he so artfully—but never didactically—kindles disruptive, disturbing stories exploring the puzzles of identity, place, and human connection.” BA, Georgetown University; MFA, Columbia University. At Bard since 2016.

Peter Filkins teaches courses in translation at Bard College, and also creative writing and literature at Bard College at Simon's Rock, where he is Richard B. Fisher Professor of Literature. Filkins has been awarded a Fulbright Senior Research Fellowship to the International Research Center for Culture Studies in Vienna for Spring 2023. He has published five books of poetry, Water / Music (2021), The View We’re Granted (2012), Augustine’s Vision (2010), After Homer(2002), and What She Knew (1998). He is also the translator of Ingeborg Bachmann’s collected poems, Darkness Spoken(2006), as well as her novels, The Book of Franza and Requiem for Fanny Goldmann (1999). In addition, he has translated H. G. Adler’s novels The Journey (2008), Panorama (2011), and The Wall (2014), and has published a biography, H. G. Adler: A Life in Many Worlds (2019). Co-winner of the 2013 Sheila Motton Best Book Award from the New England Poetry Club, he has also received fellowships from the National Endowment for the Humanities, from the Leon Levy Center for Biography, from the American Academy in Berlin, and from the Fulbright Commission of Austria. He has been awarded the Stover Prize in Poetry from Southwest Review, the New American Press Chapbook Award, as well as fellowships from the Massachusetts Cultural Council, Yaddo, MacDowell, Millay, and the Deutsches Literaturarchiv – Marbach. Previously he was the recipient of an Outstanding Translation Award from the American Literary Translators Association and received a Distinguished Translation Award from the Austrian government, as well as serving as Writer-in-Residence at the James Merrill House. His work has appeared in numerous publications, including The New York Times Book Review, Poetry, Partisan Review, The New Republic, The Paris Review, The American Scholar, and the Los Angeles Times Book Review. BA, Williams College; MFA, Columbia University. At Bard since 2007.

Thomas Chatterton Williams is the author of Losing My Cool and Self-Portrait in Black and White. He is a contributing writer at the New York Times Magazine, a columnist at Harper’s, a 2019 New America Fellow and a visiting fellow at AEI. His work has appeared in the New Yorker, the London Review of Books, Le Monde and many other places, and has been collected in The Best American Essays and The Best American Travel Writing. He has received support from Yaddo, MacDowell and The American Academy in Berlin, where he is a member of the Board of Trustees. His next book, Nothing Was the Same: The Pandemic Summer of George Floyd and the Shift in Western Consciousness, will be published by Knopf. He  joins Bard as a Hannah Arendt Center Senior Fellow and Visiting Professor of Humanities beginning in Spring 2023.

PHOTO CAPTION: L-R: Thomas Chatterton Williams, Peter Filkins, and Dinaw Mengestu. Photos by Christopher Anderson, Joanne Eldredge Morrissey, and Anne-Emmanuelle Robicquet
#
About Bard College
Founded in 1860, Bard College is a four-year, residential college of the liberal arts and sciences located 90 miles north of New York City. With the addition of the Montgomery Place estate, Bard’s campus consists of nearly 1,000 parklike acres in the Hudson River Valley. It offers bachelor of arts, bachelor of science, and bachelor of music degrees, with majors in more than 40 academic programs; graduate degrees in 13 programs; eight early colleges; and numerous dual-degree programs nationally and internationally. Building on its 161-year history as a competitive and innovative undergraduate institution, Bard College has expanded its mission as a private institution acting in the public interest across the country and around the world to meet broader student needs and increase access to liberal arts education. The undergraduate program at our main campus in upstate New York has a reputation for scholarly excellence, a focus on the arts, and civic engagement. Bard is committed to enriching culture, public life, and democratic discourse by training tomorrow’s thought leaders. For more information about Bard College, visit bard.edu.
###