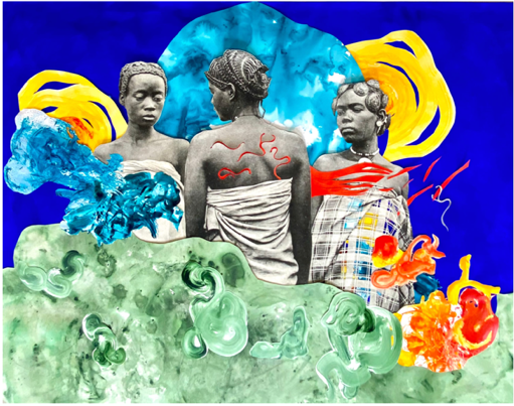 Featuring Artists from the Late 19th Century through Present Day, including
Ain Bailey, Sargent Johnson, Augusta Savage, Lorna Simpson, and Charisse Pearlina Weston, Black Melancholia Opens at CCS Bard&r
Annandale-on-Hudson, NY (May 2, 2022) — Bringing together the work of 28 artists, Black Melancholia expands and complicates the notion of melancholy in Western art history and cultures. Including new commissions as well as painting, sculpture, film, photography, works on paper, and sound, Black Melancholia pushes beyond the iconography of melancholia as an art historical and psychoanalytical concept to subvert highly racialized discourses in which notions of longing, despair, sadness, and loss were reserved for white subjects. The exhibition aims to create a generative space for inspiration, solace, and refuge through a presentation that blends new and recent works with pieces from the late 19th to mid-20th century. Black Melancholia is on view in the CCS Bard Galleries at the Hessel Museum of Art from June 25 through October 16, 2022.

“Black Melancholia is an ambitious reconfiguring of an historic narrative directing attention to a well-worn term (melancholy) and reframing it through the artworks of a transnational and transgenerational group of artists,” said Tom Eccles, Executive Director of the Center for Curatorial Studies, Bard College, and Founding Director of the Hessel Museum of Art. “The result of extensive research and scholarship on the part of Adusei-Poku, this large-scale and contentious exhibition reckons with the past and portrays a complex present and future for artists of the African Diaspora.”

“Black Melancholia reasserts Black artists in a tradition that has largely been understood as belonging to the white male genius and subverts the concept to highlight the socio-political conditions that create melancholy,” said Nana Adusei-Poku, curator of the exhibition and Associate Professor and Luma Foundation Scholar at the Center for Curatorial Studies, Bard College. “The artists featured wrestle with representations of melancholia that engage with traditional iconography of the condition yet push the boundaries of figurativeness to access what is not representable.”

Deriving from the antique alchemistic concept of the “four humors,” melancholia has been a subject in science, culture, and art for centuries. Originally seen as resulting from an excess of “black bile,” melancholia was connected to a deep sense of sadness that could lead to depression, insanity, and later genius in the arts. The meanings and interpretations of melancholia have been diverse over the centuries, becoming fashionable in 18th-century Europe as an aesthetic largely reserved for lovesick young men, and in the 20th century, when it was reframed by psychoanalyst Sigmund Freud as a pathological denial of a profound loss. Black Melancholia challenges these definitions to explore melancholy that is situated in Blackness, and the insistent conditions of oppression to which there is no foreseeable end.

In framing this expanded understanding of melancholia, the exhibition begins with a historic survey of works by Black artists, many on loan from Historically Black Colleges and Universities including Howard, Spelman, and Clark Atlanta, which represent some of the primary institutions collecting and exhibiting these works at the time of their creation. Foundational to the exhibition is the inclusion of artist Augusta Savage (1892–1962), whose work has largely been lost due to lack of preservation and stewardship. Her sculpture Realization (1936), which is presented via black and white photographs within the exhibition’s opening room, depicts a nude Black woman and man curled up next to her, representing the moment of realization of freedom of two previously enslaved individuals. Savage’s choice to show two figures establishes a counternarrative to the socially isolated individualistic pain of the white male subject, as embodied in Rodin’s The Thinker (conceived in 1880).

Also featured within the initial room of the exhibition is Rose Piper’s Grievin’ Hearted (1947), the last work that the artist painted before she was forced to give up her artwork due to family circumstances and economic hardship. In this painting, a male figure sits with his head hung low, face hidden against an austere landscape whose elements can be traced to 16th-century descriptions of melancholy and in colors that translate the pain represented in the song Grieving Hearted Blues by Jazz Singer Ma Rainey. The work references the posture of melancholy and yet evoke an inwardness that potentially offers emotional refuge.

Interiority is also the subject of Roy DeCarava’s black and white photograph Hallway (1953), an autobiographical image linked to the artist’s childhood memories of a hallway in the tenement building where he grew up, “badly lit, narrow, and confining.” Itself an act of melancholy, DeCarava’s return to this place of trauma is conveyed in an image that stands at the threshold of literalness and abstraction, providing a bridge between the historic, largely figurative works early in the exhibition and the more abstract yet figurative depictions that follow.

Among them are new commissions by artists Ain Bailey and Charisse Pearlina Weston. Bailey, an artist who primarily works in sound, engages with the loss of family in her first film, which draws from her parents’ wedding album as part of an ongoing investigation of loss and care. In her work The immaterial imaginary of rhythm moistened black salt into translucence.black point perspective or blueprints for worry (notes one of nine or for while, for when, for where?) (2022), Weston uses glass to explore the fragility of Blackness, embedding and layering the material with poetry about loss, and photographs that capture the gentrification of her hometown in Texas, representing a profound rupture of sense of place.

In addition, the exhibition features new and previous acquisitions from the Marieluise Hessel Collection. In Time Piece (Time Piece 1) (1990) by Lorna Simpson, a repeated series of photographs, in which a Black woman has her back turned away from the camera, is paired with text referencing the time of passing. This relationship between word and image is central to the work, engaging with concepts of anonymity and death.

Another work from the collection, Ask Ellis (2012) by Rashid Johnson, cracks open the domestic to reveal the superstructures that shape it, such as race and class. The work is presented alongside Johnson’s Black and Blue (2021), marking its East Coast debut. The video work, which was created under quarantine during the pandemic, depicts everyday activities—eating, driving, exercising—imbued with a sense of isolation and melancholia, pointing toward the human impulse to sustain normalcy even as the world contends with major disruptions. The inclusion of these two works suggests a recurring theme of melancholy in Johnson’s practice over time and media, as emblematic of a larger engagement with melancholy’s intersection with Blackness throughout the trajectory of art history.

The Center for Curatorial Studies, Bard College
The Center for Curatorial Studies, Bard College (CCS Bard) is the leading institution dedicated to curatorial studies, a field exploring the conditions that inform contemporary exhibition-making and artistic practice. Through its Graduate Program, Library and Archives, and the Hessel Museum of Art, CCS Bard serves as an incubator for interdisciplinary practices, advances new and underrepresented perspectives in contemporary art, and cultivates a student body from diverse backgrounds in a broad effort to transform the curatorial field. CCS Bard’s dynamic and multifaceted program includes exhibitions, symposia, publications, and public events, which explore the critical potential of the practice of exhibition-making.