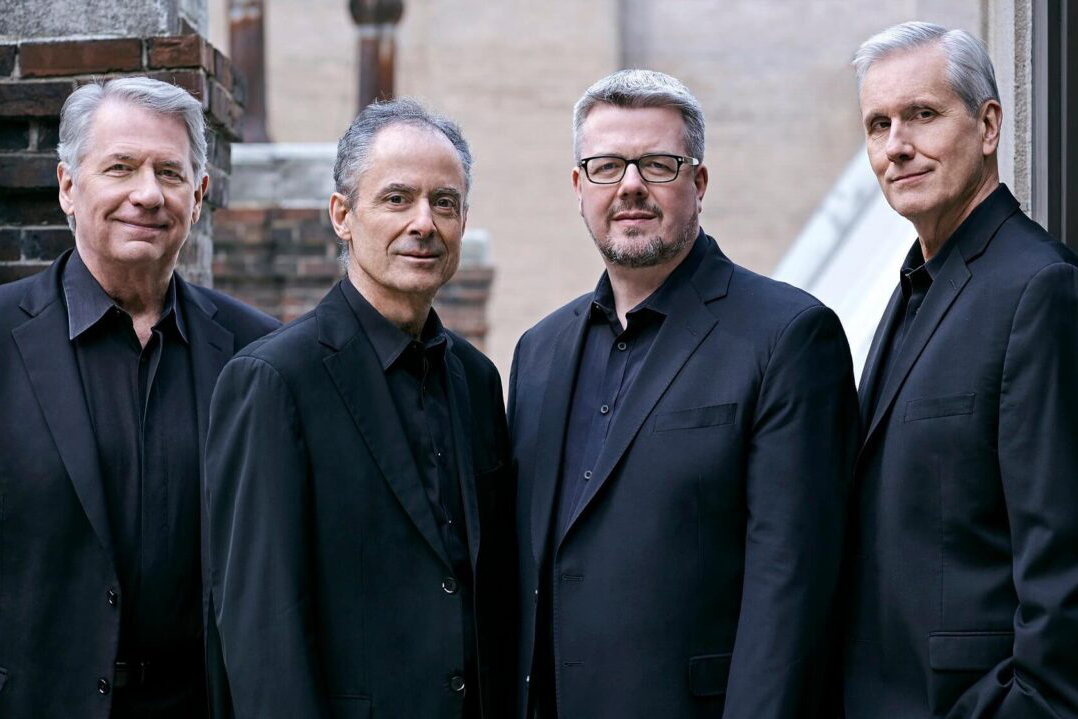 Bach: Art of the Fugue (selections)
Borodin: Quartet No. 2 in D Major
Bartok: String Quartet No. 1 in A Major

The Emerson Quartet, named “America’s greatest quartet” by Time magazine, is one of the most celebrated classical music quartets of all time, maintaining its status as one of the world’s premier chamber music ensembles for more than four decades. The Quartet has made more than thirty acclaimed recordings, and has been honored with nine GRAMMYs® (including two for Best Classical Album), three Gramophone Awards, the Avery Fisher Prize, and Musical America’s “Ensemble of the Year” award. They have worked with some of today’s most esteemed composers to premiere new works, and have partnered with soloists such as Renée Fleming, Barbara Hannigan, Evgeny Kissin, Emanuel Ax, and Yefim Bronfman, to name a few.

This incomparable American ensemble will disband at the end of October 2023 after a final concert at Alice Tully Hall, forty-seven remarkable years after it was initially formed at Juilliard in 1976.  All four members of the Quartet – Eugene Drucker, Philip Setzer, Lawrence Dutton and Paul Watkins – will continue to perform and teach individually; as a group, they will continue to coach and mentor young ensembles through the Emerson String Quartet Institute at Stony Brook University, along with cellist David Finckel, who was a member of the quartet for 34 years.  The Quartet’s original members were Drucker, Setzer, violist Guillermo Figueroa, Jr. and cellist Eric Wilson. Lawrence Dutton joined the group in 1977; cellist David Finckel became a member in 1979 and was succeeded by Paul Watkins in 2013.

For twenty years and counting, Sō Percussion has redefined chamber music for the 21st century through an “exhilarating blend of precision and anarchy, rigor and bedlam” (New Yorker). They are celebrated by audiences and presenters for a dazzling range of work: for live performances in which “telepathic powers of communication” (New York Times) bring to life the vibrant percussion repertoire; for an extravagant array of collaborations in classical music, pop, indie rock, contemporary dance, and theater; and for their work in education and community, creating opportunities and platforms for music and artists that explore the immense possibility of art in our time.

In the 2021-22 season, Sō Percussion has returned to live concerts and continues to develop a range of online programs. In December 2021, they returned for their seventh featured concert at Carnegie Hall with an all-star cast of collaborators, including Grammy-winning soprano Dawn Upshaw, pianist Gil Kalish, Nathalie Joachim (recipient of their inaugural Andrew W. Siegel Fellowship), Shodekeh Talifero, Caroline Shaw, and more. Last fall they performed David Lang’s man made with the Cincinnati Symphony, and touring their new Nonesuch Records album Let the Soil Play Its Simple Part with Shaw around the United States.

In addition to Let the Soil Play Its Simple Part, Sō welcomed a number of critically acclaimed albums in 2021: Caroline Shaw’s Narrow Sea on Nonesuch Records, A Record Of.. on Brassland Music with indie duo Buke and Gase, and an acclaimed version of Julius Eastman’s Stay On It on new imprint Sō Percussion Editions. This adds to a catalogue of more than twenty-five albums featuring landmark recordings of works by David Lang, Steve Reich, Steve Mackey, and many other composers.

Since its first performance as a student ensemble in 1999, Sō Percussion has appeared at many of the most prestigious concert halls and festivals around the world, including Carnegie Hall, the Paris Philharmonie, the Barbican Centre, BAM (Brooklyn Academy of Music), Walt Disney Hall with the Los Angeles Philharmonic and Gustavo Dudamel, the Lincoln Center Festival, at the international TED conference, and throughout Europe, Australia, and South America.

Violinist Jaime Laredo is regarded as one of the top violinists of the late 20th century, especially notable as part of the Kalichstein-Laredo-Robinson Trio. He has also been active as a conductor and educator. Performing for over six decades before audiences across the globe, Jaime Laredo has excelled in the multiple roles of soloist, conductor, recitalist, pedagogue, and chamber musician. Since his stunning orchestral debut at the age of eleven with the San Francisco Symphony, he has won the admiration and respect of audiences, critics and fellow musicians with his passionate and polished performances. That debut inspired one critic to write: ‘In the 1920’s it was Yehudi Menuhin; in the 1930’s it was Isaac Stern; and last night it was Jaime Laredo.’ His education and development were greatly influenced by his teachers Josef Gingold and Ivan Galamian, as well as by private coaching with eminent masters Pablo Casals and George Szell. At the age of seventeen, Jaime Laredo won the prestigious Queen Elisabeth of Belgium Competition, launching his rise to international prominence. With 2009 marking the 50th anniversary of his prize, he was honored to sit on the Jury for the final round of the Competition.

Cellist Sharon Robinson, winner of the Avery Fisher Recital Award, the Piatigorsky Memorial Award, the Pro Musicis Award, and a Grammy Nominee, is recognized worldwide as a consummate artist and one of the most outstanding musicians of our time. Whether as a recitalist, soloist with orchestra, or member of the world-famous Kalichstein-Laredo-Robinson Trio, critics, audiences and fellow musicians respond to what the Indianapolis Star has called “A cellist who has simply been given the soul of Caruso.” Her guest appearances with orchestras include the Philadelphia and Minnesota orchestras, the Los Angeles Philharmonic, the Boston, Baltimore, Cincinnati, Dallas, Houston, National, Pittsburgh, St. Louis, and San Francisco symphonies, and in Europe, the London Symphony, Helsinki Philharmonic, Zürich’s Tonhalle Orchestra, and the English, Scottish, and Franz Lizst chamber orchestras.

As solo artists, as the Laredo-Robinson Duo, and as members of the Kalichstein-Laredo-Robinson Trio with pianist Joseph Kalichstein for more than 40 years, Jaime Laredo and Sharon Robinson are among the busiest and most respected musicians in the world. In 2012, the husband-wife team joined the esteemed instrumental and chamber music faculty of the Cleveland Institute of Music. They have been Hudson Valley Chamber Music Circle’s Artistic Directors for twenty years.

Benjamin Hochman, pianist, is a musician of exceptional versatility who regularly appears in multiple guises as orchestral soloist, recitalist, and chamber musician. In recent years he has ventured into the orchestral repertoire as a conductor. His wide range of partners and projects is matched by his curiosity, focus, and ability to communicate deeply with audiences. Since his Carnegie Hall debut as soloist with the Israel Philharmonic under the baton of Pinchas Zukerman, Hochman has enjoyed an international performing career, appearing as soloist with the New York, Los Angeles, and Prague Philharmonic Orchestras, and the Chicago, Pittsburgh, San Francisco, and Jerusalem Symphony Orchestras under conductors including Gianandrea Noseda, Trevor Pinnock, John Storgårds, and Joshua Weilerstein. A winner of Lincoln Center’s Avery Fisher Career Grant, he performs at venues including Konzerthaus Wien, Berlin Konzerthaus, Amsterdam Concertgebouw, the Louvre in Paris, Liszt Academy in Budapest, Mariinsky Theatre in St. Petersburg, New York’s 92nd Street Y, and Suntory Hall in Tokyo. Festival highlights include IMS Prussia Cove, Israel Festival, Klavierfestival Ruhr, Lucerne, Marlboro, Santa Fe, Spoleto, and Verbier. Hochman’s recent and upcoming projects reflect the breadth of his musical activities, his imaginative approach to programming, and his ongoing relationships with several orchestras and festivals. He performed four Beethoven Piano Sonatas for Daniel Barenboim in December 2020 at the Pierre Boulez Saal as part of a filmed workshop and will return to the Santa Fe Chamber Music Festival in July 2022.

“Mother of Peace” and “Lion” in Zulu, Nokuthula Endo Ngwenyama was born in Los Angeles, of Zimbabwean-Japanese parentage and included in this performance is her Elegy, a work which was commissioned by Kenney Center two years ago and co-commissioned by the Hudson Valley Chamber Music Circle. Ngwenyama’s performances as orchestral soloist, recitalist, and chamber musician garner great attention. Gramaphone proclaims her as “providing solidly shaped music of bold mesmerizing character.” As a composer, Uptown Magazine featured her “A Poet of Sound.” As a performer, Ms. Ngwenyama gained international prominence winning the Primrose International Viola Competition at 16. The following year she won the Young Concert Artists International Auditions, which led to debuts at the Kennedy Center and the 92nd Street ‘Y.’ A recipient of the prestigious Avery Fisher Career Grant, she has performed with orchestras and as recitalist the world over.

About HVCMC
In 1950, Helen Huntington Hull joined with her two Staatsburg friends, Mrs. Lydig Hoyt and Mrs. Jonas Borak, as well as Emil Hauser (original first violinist of the Budapest Quartet and member of the Bard College faculty) to bring the best classical musicians of the time to the Hudson Valley to play chamber music for a group of appreciative friends and neighbors. This was the inception of the Hudson Valley Chamber Music Circle (HVCMC). In 1979, the Circle began its formal association with Bard College as an independent program affiliated with the Bard Center. Since then, the audience has expanded to include music lovers from all over the Hudson Valley, as well as neighboring states. In 2000, the distinguished musicians Jaime Laredo and Sharon Robinson became artistic directors for the Circle and have maintained the early reputation for showcasing the finest performances of works from a wide-ranging repertory.