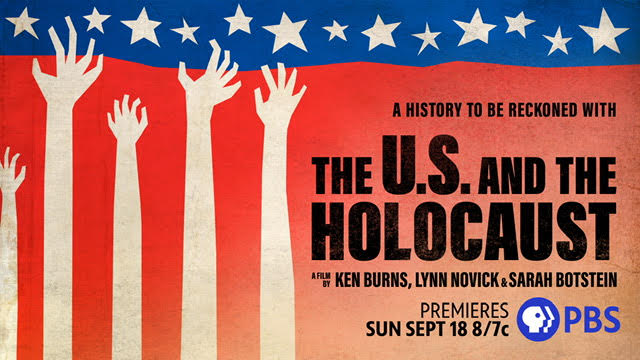 Bard College Hosts Screening and Panel Discussion of The US and the Holocaust, a New PBS Documentary Directed by Ken Burns, Lynn Novick, and Sarah Botstein, on September 21

ANNANDALE-ON-HUDSON, NY—Bard College will host an abridged screening of The US and the Holocaust, a new PBS documentary directed and produced by Ken Burns, Lynn Novick and Sarah Botstein, on September 21. The short 30-minute screening will be followed by a panel discussion with codirector and producer of The U.S. and the Holocaust Sarah Botstein; Dean of Graduate Studies and Associate Professor of History Christian Ayne Crouch; Professor of Comparative Literature and Director of the Human Rights Program Thomas Keenan; Associate Professor and Patricia Ross Weis ’52 Chair in Jewish History and Culture Cecile E. Kuznitz; and Charles Ranlett Flint Professor of Humanities Daniel Mendelsohn, author of The Lost: A Search for Six of Six Million, who shares his family’s story in the film. The event will be introduced by President Leon Botstein and followed by an audience Q&A session. This event will be held on Wednesday, September 21 at 7:30 pm in the Sosnoff Theater at The Fisher Center for the Performing Arts at Bard College. It is free and open to the public.

The US and the Holocaust is a three-part, six-hour series directed by Ken Burns, Lynn Novick and Sarah Botstein, that examines America’s response to one of the greatest humanitarian crises of the twentieth century. Americans consider themselves a “nation of immigrants,” but as the catastrophe of the Holocaust unfolded in Europe, the United States proved unwilling to open its doors to more than a fraction of the hundreds of thousands of desperate people seeking refuge. Through riveting firsthand testimony of witnesses and survivors who as children endured persecution, violence and flight as their families tried to escape Hitler, this series delves deeply into the tragic human consequences of public indifference, bureaucratic red tape and restrictive quota laws in America. Did the nation fail to live up to its ideals? This is a history to be reckoned with. The series will air September 18, 19 and 20, at 8-10 pm ET (check local listings) on PBS stations, and all three episodes will stream the night of premiere on PBS.org and the PBS Video app. To learn more about The US and the Holocaust, please visit pbs.org/kenburns/us-and-the-holocaust/.

About the Panelists
Sarah Botstein has for more than two decades produced some of the most popular and acclaimed documentaries on PBS. Her work with directors Ken Burns and Lynn Novick, includes Hemingway (2020), College Behind Bars (2019), The Vietnam War (2017), Prohibition (2011), The War (2007) and Jazz (2001). The US and the Holocaust is Botstein’s directorial debut.

Christian Ayne Crouch is dean of graduate studies and associate professor of history at Bard College. Her work focuses on the histories of the early modern Atlantic, comparative slavery, American material culture, and Native American and Indigenous Studies. Her book, Nobility Lost: French and Canadian Martial Cultures, Indians, and the End of New France 1600–1848 (Cornell University Press, 2014) won the Mary Alice and Philip Boucher Prize for best book in French colonial history from the French Colonial Historical Society in 2015.

Thomas Keenan teaches human rights, media, and critical theory at Bard College, where he directs the Human Rights Project. He codirects the Threatened Scholars Integration Initiative, a project of the Open Society University Network and co-founded the OSUN Center for Human Rights and the Arts. He is the author of Fables of Responsibility (1997) and, with Eyal Weizman, Mengele’s Skull (2012).  He has served on the boards of a number of human rights organizations and journals, including WITNESS, Scholars at Risk, The Journal of Human Rights, and Humanity.

Cecile E. Kuznitz is Associate Professor and Patricia Ross Weis '52 Chair in Jewish History and Culture at Bard College, where she directs the Jewish Studies Program and teaches courses on the Holocaust. She is the author of YIVO and The Making of Modern Jewish Culture: Scholarship for the Yiddish Nation as well as numerous articles on the history of Yiddish scholarship, the Jewish community of Vilna, and Jewish urban history. She was most recently a Ruth Meltzer fellow at the Katz Center for Advanced Judaic Studies (University of Pennsylvania) and a Lady Davis Fellow at the Hebrew University of Jerusalem.

Daniel Mendelsohn, the Charles Ranlett Flint Professor of Humanities at Bard College, is the author of the award-winning international bestseller The Lost: A Search for Six of Six Million.
#
About Bard College
Founded in 1860, Bard College is a four-year, residential college of the liberal arts and sciences located 90 miles north of New York City. With the addition of the Montgomery Place estate, Bard’s campus consists of nearly 1,000 parklike acres in the Hudson River Valley. It offers bachelor of arts, bachelor of science, and bachelor of music degrees, with majors in more than 40 academic programs; graduate degrees in 13 programs; eight early colleges; and numerous dual-degree programs nationally and internationally. Building on its 162-year history as a competitive and innovative undergraduate institution, Bard College has expanded its mission as a private institution acting in the public interest across the country and around the world to meet broader student needs and increase access to liberal arts education. The undergraduate program at our main campus in upstate New York has a reputation for scholarly excellence, a focus on the arts, and civic engagement. Bard is committed to enriching culture, public life, and democratic discourse by training tomorrow’s thought leaders. For more information about Bard College, visit bard.edu.
###