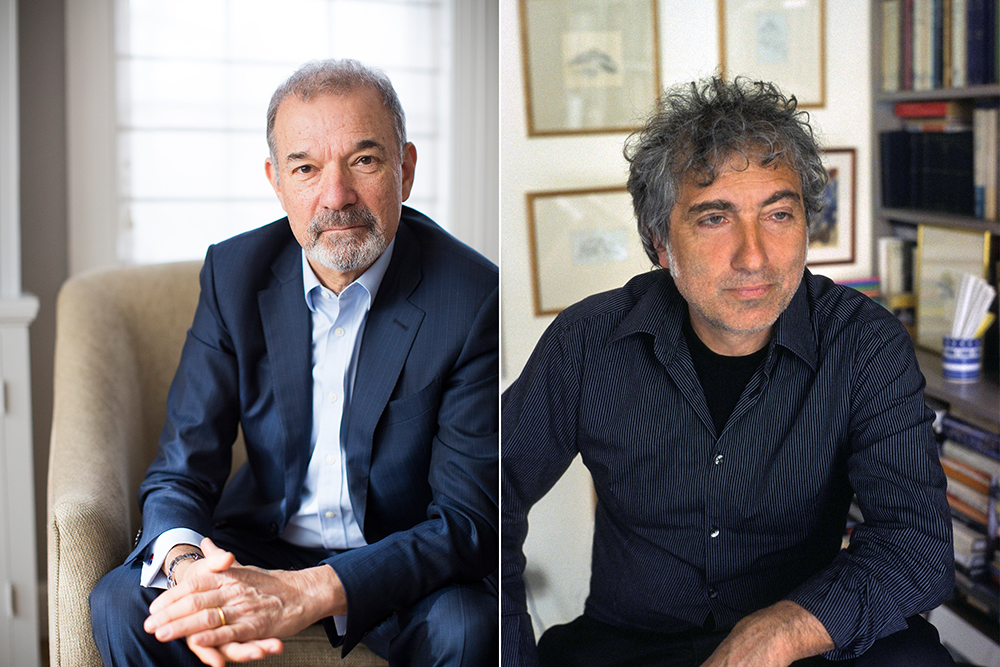 The Lecture Series, “Second Chances: Shakespeare and Freud,” Will Be Held in November
ANNANDALE-ON-HUDSON, N.Y.—This November, Bard College presents renowned scholars Stephen Greenblatt and Adam Phillips delivering the Anthony Hecht Lectures in the Humanities in honor of preeminent poet, alumnus, and former Bard faculty member Anthony Hecht ’44. Greenblatt, who is the John Cogan University Professor of the Humanities at Harvard University, and Phillips, who is a visiting professor in the Department of English at the University of York, will present the lecture series, “Second Chances: Shakespeare and Freud.” Yale University Press will publish the lectures.

The lecture series includes “Shakespeare’s First Chance” by Stephen Greenblatt and “Freud’s First Chance,” by Adam Phillips on Thursday, November 10, at 5 pm; “Second Chances: For and Against” by Adam Phillips on Friday, November 11, at 10 am. Free and open to the public, these lectures will take place in Weis Cinema of the Bertelsmann Campus Center at Bard College. A reception precedes each lecture. For more information about this lecture series, please call (845) 758-7405.

The final lecture in the series, “Shakespeare's Second Chances” by Stephen Greenblatt will be held on Wednesday, November 16 at 6:30pm at The Morgan Library & Museum in New York City. Tickets for the Morgan Library lecture are $25; $20 for Morgan Members and Bard College affiliates; and free for students with a valid ID. Reserve tickets here or call (212) 685-0008, ext. 560.

Stephen Greenblatt, Shakespearean scholar, literary historian, and author, is Cogan University Professor of the Humanities at Harvard University. He is the author of 14 books, including Tyrant: Shakespeare on Politics; The Rise and Fall of Adam and Eve; The Swerve: How the World Became Modern; Shakespeare’s Freedom; Will in the World: How Shakespeare Became Shakespeare; Hamlet in Purgatory; Marvelous Possessions; and Renaissance Self-Fashioning. He is General Editor of The Norton Anthology of English Literature and of The Norton Shakespeare, has edited seven collections of criticism, and is a founding editor of the journal Representations. His honors include the 2016 Holberg Prize from the Norwegian Parliament, the 2012 Pulitzer Prize and the 2011 National Book Award for The Swerve, MLA’s James Russell Lowell Prize (twice), among many others.

Adam Phillips, psychoanalyst and writer, was formerly Principal Child Psychotherapist at Charing Cross Hospital in London. He is a Visiting Professor in the Department of English at the University of York, and a Fellow of the Royal Society of Literature. He is the author of many books of psychoanalysis and literary criticism, most recently On Wanting To Change and On Getting Better.

The Anthony Hecht Lectures in the Humanities at Bard College were established in 2007 to honor the memory of this preeminent poet by reflecting his lifelong interest in literature, music, the visual arts, and our cultural history. Anthony Hecht graduated from Bard in 1944 and taught at the College from 1952–55 and 1962–66. Every two years a distinguished scholar delivers a series of lectures at Bard College and in New York City that addresses works close to Hecht’s own imagination and sympathies. Each lecture series is published by Yale University Press. Previous Hecht Lecture Series speakers include literary scholar and author Christopher Ricks; historian, critic, author, and broadcaster Simon Schama; renowned historian Garry Wills; classics scholar Mary Beard; literary critic and musicologist Daniel Albright; and artist and designer Maya Lin.

“It is a great honor that Anthony Hecht chose Bard as his home, both as a student and a faculty member, and we are delighted to recognize his extraordinary achievements through this important lecture series,” says Bard College President Leon Botstein.
#