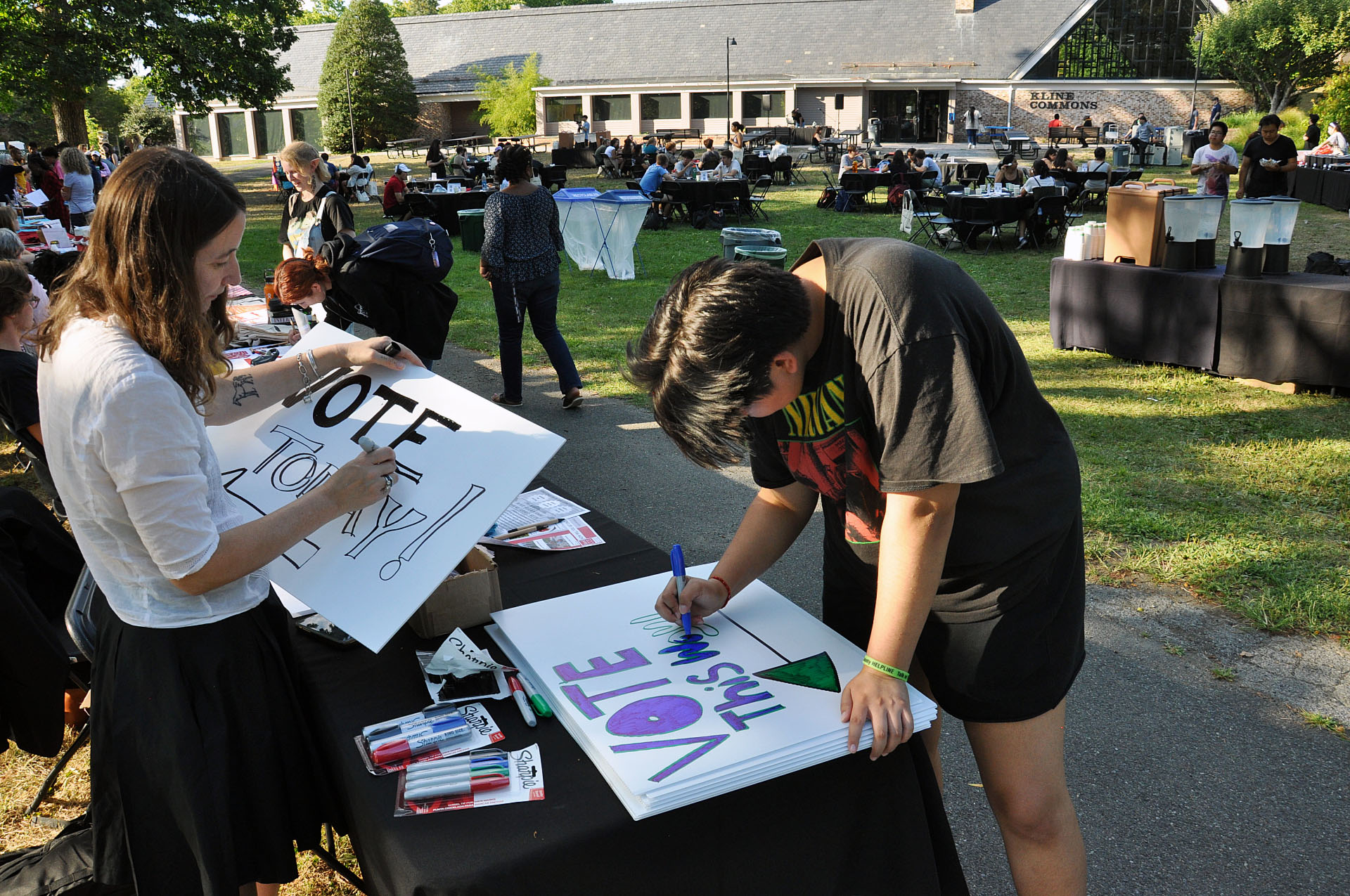 ANNANDALE-ON-HUDSON, N.Y.—After a fight that has been going on for nearly a quarter century, the Dutchess County Board of Elections (BOE) has finally relented and Bard College will have a fully functional polling site on campus for the 2022 general election, and hopefully beyond. Last week, Election Commissioner Hannah Black informed Bard officials that the poll site at Bard’s Bertelsmann Campus Center would be fully staffed and have the requisite number of polling machines; previously, at the insistence of Republican Commissioner Erik Haight, the site had been the only one in the County to have three instead of four poll workers and one of two to have one polling machine, in violation of election regulations, policies, and practices, and court ordered settlement. The decision occurred after Bard had filed a complaint with the Enforcement Counsel of the New York State Board of Elections following years of litigation to secure an on-campus polling location and ensure equal access to the ballot.

The decision last week appears to be the final chapter in a fight that has been taking place since 1999, when Bard and Vassar students pressed the Dutchess County Board of Elections to cease systematically denying the students the right to register locally, as is their right under New York State election law. The focus shifted to discriminatory regulations concerning student addresses and finally to a poll site on the Bard campus. The victory comes just after the 50th anniversary of the 26th Amendment, which lowered the voting age from 21 to 18 and outlaws age discrimination in ballot access.

Over the last two decades, students from Bard won four lawsuits, including a federal lawsuit and accompanying consent decree (with students from Marist and the Culinary Institute of America) forcing the cessation of registration rejections due to allegedly invalid student addresses (2012-13); a New York State Supreme Court suit over the counting of votes after students were harassed at polls (2009); and two New York State Supreme and Appellate Court decisions establishing and maintaining a polling site at Bard campus (2020 and 2021). In the latter two cases, students were joined by litigants including Bard President Leon Botstein and Vice President for Civic Engagement Erin Cannan, and supported by The Andrew Goodman Foundation, a national nonprofit organization dedicated to making youth voices and votes a powerful force in democracy. In all, the County has spent more than $120,000 in legal fees over the past decade in losing a series of lawsuits.

The Bard cases have had significant reverberations. Last spring, in part in response to Bard’s experience, coupled by the efforts of a statewide voting rights coalition, the state passed a law mandating polling sites on college campuses across the state with 300 or more registered voters. That law is currently being tested at Vassar College, which has yet to be granted a new polling site.

For the 2022 election, the Board of Elections decided to close the second traditional poll site in District 5 at St. John’s Episcopal Church in Barrytown, in spite of a court-approved agreement between Bard and the BOE that allowed for polling sites at both St. John’s and Bard. The St. John’s location had been the site of dispute because of its distance from public transportation and its inaccessibility. The site had been one focus of the complaint to the Enforcement Counsel of the Board of Elections, which included evidence that the BOE had conducted an obviously false American with Disabilities Act survey, including listing “N/A” in response to multiple survey questions on the accessibility of ramps and walkways, coupled with subsequent documentation of Commissioner Haight’s decision to block efforts to conduct a new survey in spite of representations to a Supreme Court judge that the Board would conduct a new survey immediately following the 2020 lawsuit.

Jonathan Becker, Bard’s Executive Vice President and Director of Bard’s Center for Civic Engagement stated: “This is a victory for voting rights and for youth voters everywhere and for the 26th Amendment. The Board of Elections’ systemic discrimination against students has been a lesson about the need to fight injustice wherever it appears. We are also pleased the Board’s actions, particularly those of Commissioner Erik Haight, have been so egregious that they have impelled the state to implement legislative fixes to curb abuses of power throughout the state.”

Erin Cannan, Bard’s Dean for Civic Engagement and a plaintiff in the 2020 and 2021 lawsuits said: “This victory can serve as a model for other communities and universities where long-standing efforts to limit voter access can be tackled through partnership, education, and trust. Democracy is about more access not less, and it is in the grassroots work where critical concerns that seem out of our reach can actually be changed by working together in our own neighborhoods.”

Oliver Abrams ’25, a Bard anthropology student who works for the student-led initiative [email protected], said: “Bard College’s 23 years of effort have paid off as the Bertelsmann Campus Center is now set to hold an active, fully functioning polling site. This crucial moment is less than a month before the midterm elections, when Bard students will be able to vote on campus without barriers to accessibility. Previously, polling took place in an inaccessible building off campus; now, students can benefit from a direct pathway to civic engagement.”

Yael Bromberg, Esq. of Bromberg Law LLC, a 26th Amendment legal scholar and Special Counsel & Strategic Advisor to the President/CEO of The Andrew Goodman Foundation, who was co-counsel on the recent lawsuits, stated: “The fight for an on-campus polling location at Bard College illustrates the impact that small but mighty victories can have on the state and federal level, and the power of the theory of change endorsed by The Andrew Goodman Foundation which leverages organizing, advocacy, public education, and litigation when necessary. It also exemplifies the power of youth and intersectional voices, particularly when they are supported with cross-generational and cross-organizational leadership.”

What is significant:
Further information is available at: [email protected] website
#
About Bard College
Founded in 1860, Bard College is a four-year, residential college of the liberal arts and sciences located 90 miles north of New York City. With the addition of the Montgomery Place estate, Bard’s campus consists of nearly 1,000 parklike acres in the Hudson River Valley. It offers bachelor of arts, bachelor of science, and bachelor of music degrees, with majors in more than 40 academic programs; graduate degrees in 13 programs; eight early colleges; and numerous dual-degree programs nationally and internationally. Building on its 162-year history as a competitive and innovative undergraduate institution, Bard College has expanded its mission as a private institution acting in the public interest across the country and around the world to meet broader student needs and increase access to liberal arts education. The undergraduate program at our main campus in upstate New York has a reputation for scholarly excellence, a focus on the arts, and civic engagement. Bard is committed to enriching culture, public life, and democratic discourse by training tomorrow’s thought leaders. For more information about Bard College, visit bard.edu.
###