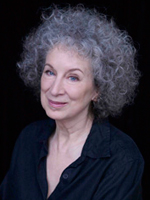 Internationally Acclaimed Novelist Margaret Atwood Delivers Address to Class of 2010 at Bard College’s One Hundred Fiftieth Commencement on Saturday, May 22

The following is the text of Atwood’s commencement address:

Congratulations! You must all have a great sense of relief—you made it through, you have now graduated from Bard College—a unique and extraordinary liberal arts college, battle-scarred but still bravely standing—where you will have gained invaluable experience in thinking outside the box and in dancing to a surprisingly different tune. I thank Bard for inviting me here, and for the honor they have done me.

I don’t deserve all the nice things you’ve said about me—a writer is doomed once he or she starts believing the billboards, because it’s part of the novelist’s job to represent humanity in its wholeness, warts and all, and you can’t really get into those warts without having some of them yourself. Yes, I am a warty person.

For who but a warty person—or, to put it in more romantic terms, one who has visited the shadow side—would have written two fun-filled, joke-packed novels about the almost total annihilation of the human race? I didn’t get any literary awards for those. Judges might warm to the idea of an atrocity or two, but the entire human race? Note to self: Margaret. You’re an idiot. You went too far.

I hope these novels will remain just that—novels—and that you won’ t be faced with what’s in them. Still, you must have some apprehension. Ahead of you lies The Rest of Your Life, and that can be a daunting prospect, especially in these tough economic times. The difference between someone your age and someone my age is that I kind of know the plot. I know how my story is likely to turn out, and not so far from now. But you don’t, and that can be very anxiety-making.

Let me try to remember what it was like to be roughly your age—some 47 years ago.

The reason for my being invited here to Bard was the Mary McCarthy Award, which I have incongruously but gratefully received. And, as it happens, when I was your age I was reading Mary McCarthy’s famous 1963 novel, The Group. I can remember exactly where I was reading it—in Cambridge, Massachusetts, in the bathtub on the third floor of a women’s graduate residence. It was a rambling, 19th century classical white New England building. Unbeknownst either to itself or to me, it would later serve as the model for the Commander’s house in my 1985 novel, The Handmaid’s Tale. It was a warm late spring day; my just-washed hair had been shellacked with a green gel product called Dippity Do and rolled onto big bristle rollers, in my ongoing struggle to make it straighter. The window blind was down, but the window was slightly open, kept from being raised higher by a lock, for this women’s residence was a magnet for prowlers, Peeping Toms, and exposure artists.

I was just at the famous numerological sex scene in The Group when in through the open window came a large, hairy hand, groping around to see what might be accomplished. I thought of slamming the window down on it, or putting the wet soap into it, but I did nothing. I merely contemplated it, wondering to what literary uses it might be put. Surely Mary McCarthy would have known.

That story makes those times sound carefree. But consider: World War II had been over for a mere 17 years, and many countries were still recovering from the enormous trauma and destruction that war had caused. Elvis Presley had already occurred, but the Pill and miniskirts and pantyhose and the Beatles were still in the future; so was the woman’s movement that began in 1968-69. Women at college were told they were there so they could make suitable dinner-table conversation once they married a lawyer. We lived in the shadow of the Cold War and the atomic bomb, convinced that we could be blown to smithereens at any moment. The civil rights movement was trying to end segregation, and encountering violence and murder. The failed Bay of Pigs invasion of Cuba in 1961 was followed swiftly by the Cuban missile crisis of 1962, which had scared us silly.

John F. Kennedy was the glamorous President, but he had less than a year to live: he would be assassinated on November 22 of that very same year. American involvement in the Vietnam War had already begun: a war Mary McCarthy would later oppose, as she opposed many things throughout her life. One of the many things she wasn’t too keen on was The Handmaid’s Tale, which she reviewed unfavorably for the New York Times. Lack of imagination, was her verdict. I suppose she just didn’t believe that religious extremism would ever get that powerful, though she did agree with the novel’s suspicion of credit cards.

Those of us entering The Rest of Our Life back then felt we were living in tense times. And we were. And so are you. The problems you will face are to some extent predictable—who can now avoid the fallout from the economic meltdown of 2008? The ripples are still spreading. Then there’s the environmental and climate crisis. “If you want to make God laugh,” goes the joke, “tell him your plans.” All gods were once weather gods, and the weather gods are laughing at us a lot.

With climate change will come water wars, and worsening conditions for crops, and famines—25 million people entered the ranks of the malnourished in 2007 alone. Couple these conditions with growing demands for energy, and thus more CO2 and more global warming—how will such forces play out? As populations attempt to shift from less prosperous to more prosperous areas and conflicts threaten, more walls will go up, as those who have try to keep, and those who have not will in desperation try to storm the barricades. Epidemic diseases will break out. What is a single individual to do? What can a single individual do? It will be part of your story to find out.

But more important for you to consider are the mental walls—the polarization and labelling that seem to be so characteristic of our times. When people can no longer talk about the problems they share, but can only scream as if the debate were one big shock jock radio rant, a democratic society is in trouble. Part of the screaming happens because, as a civilization, we’ve exhausted the usefulness of the old terms of reference—the traditional left and the traditional right have lost much relevance, as global financial systems twist under the strain and neither side seems able to come up with new, useful ideas. “Choice of evils” debates always produce extremism—people choose what they hope is the lesser evil, then call it good and demonize the other choice. It will be a challenge for your generation to synthesize—to move beyond Us versus Them, to We.

I sometimes make hopeful predictions rather than dire ones, so let me try a few. Situations that seem hopeless and deadlocked today can change in an instant. The Middle East situation will be resolved under the process begun by President Obama, when Israel realizes what many of its citizens already know—that to do otherwise would lead to disaster. The beleaguered Palestinians will finally be a recognized state. All parties in the region will join together to work on solutions to the vanishing water supply, for no one can survive more than three days without water. The entire Middle East, including Iran, will begin talks leading to a nuclear-free zone. Green energy technologies will improve to the point at which we are no longer eating and drinking oil. Industrial hemp—you’d have to smoke an acre to get high, so no threat there—will once again be grown in the United States, adding a valuable fuel, food, and clothing crop, not to mention paper: the Declaration of Independence was written on hemp paper.

That’s about all the hope I can handle for today.

Back to Mary McCarthy. With her strong and energetic spirit, Mary McCarthy worked her way through various ideologies –adopting them, testing them, rejecting them, to arrive at a belief in—I quote—“the necessity for creative autonomy that transcends doctrine.” That is the gift all warty novelists ultimately need to have, and that is the gift I would wish for you. It will allow you to work in communities, but not to be entrapped by them; to contribute what lies within your power, rather than what others tell you that you must. Above all, relish your sojourn on planet earth. It may be a strenuous and demanding time, but what time has not been? Enjoy the flowers. For happily, there are still many flowers to enjoy.

Margaret Atwood was born in 1939 in Ottawa. She grew up spending a great deal of time in the wilds of northern Ontario and Quebec, and later came to reside in Toronto, Canada. She received her undergraduate degree from Victoria College at the University of Toronto and her master’s degree from Radcliffe College. She has since been awarded honorary degrees from more than twenty institutions, including Oxford and Harvard, the Sorbonne, and the Ontario College of Art and Design.

An avid environmentalist, Atwood, and her partner, writer Graeme Gibson, are honorary co-presidents of BirdLife International, a global initiative devoted to the conservation of birds and their fragile habitats. She is also one of the current vice presidents of International PEN, a worldwide organization of writers dedicated to promoting and protecting freedom of expression.

Atwood is the author of more than thirty-five volumes of poetry, fiction, and nonfiction and is perhaps best known for her novels, which include The Edible Woman (1970), The Handmaid’s Tale (1983), The Robber Bride (1994), and Alias Grace (1996). The Blind Assassin won the 2000 Booker Prize, and in April 2003, her eleventh novel, the Man Booker Prize-nominated Oryx and Crake, was released to great acclaim. Atwood’s The Penelopiad, a retelling of The Odyssey from the perspective of Penelope and her maids, was released in the fall of 2005 and she has since adapted it for stage performance. Her latest publications demonstrate her versatility and include a collection of short stories, Moral Disorder, and a collection of poems, The Door, which was nominated for a 2007 Governor General’s Literary Award. In her CBC Massey Lecture Series, Payback: Debt and the Shadow Side of Wealth (2008), Atwood stressed the importance of paying our debts—cultural, social, and environmental. Most recently, Atwood worked with Zerofootprint to ensure that the worldwide promotional tour for her new novel, The Year of the Flood, was carbon neutral.

Atwood’s work has reached a global audience through translations in more than thirty languages, including Farsi, Japanese, Turkish, Finnish, Korean, Icelandic, and Estonian.