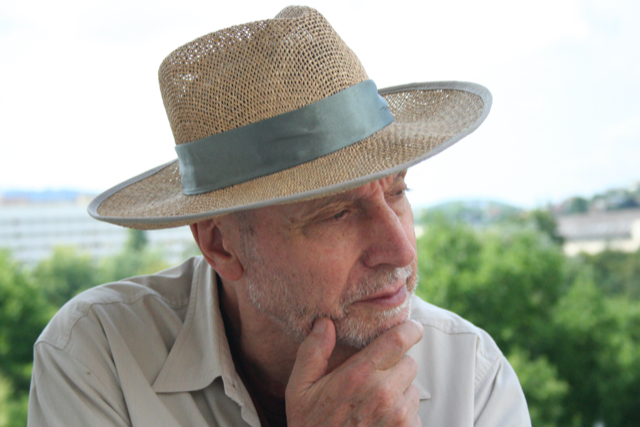 ANNANDALE-ON-HUDSON, N.Y.—Bard College will host a book launch and colloquium to honor the novel Eden Revisited, written by the late, distinguished alumnus László Z. Bitó ’60. Bitó, granted asylum from his native Hungary in 1956, went on to develop the gold standard drug for glaucoma as he pursued a celebrated scientific career at Columbia University. In later life, he devoted himself to writing and became a force in Hungarian intellectual life and philanthropy, and published numerous works. Eden Revisited is his first book to be published in English in more than a decade.

The colloquium brings together preeminent scholars of religion who will speak to the novel’s themes: Bruce Chilton ’71, director of the Institute of Advanced Theology at Bard, which is copublishing the book with Natus Books, Alan Avery-Peck, Kraft-Hiatt Professor in Judaic Studies at the College of the Holy Cross, and Claudia Setzer, professor of religion at Manhattan College. Leon Botstein, president of Bard College, will introduce the panel. A discussion with audience members will follow the talks.

The book launch and colloquium take place on Saturday, October 22 from 1:45 pm-3:15 pm in the Bitó Conservatory Building, Performance Space. It will also be livestreamed here.

This event is part of Family and Alumni/ae Weekend at Bard College. Visit families.bard.edu for more information.

Alan Avery-Peck is Kraft-Hiatt Professor in Judaic Studies at the College of the Holy Cross, in Worcester, Massachusetts. At Holy Cross, he teaches courses on all aspects of Judaism, ranging from an introduction to Judaism to an upper-level seminar on theological responses to the Holocaust. A specialist in early rabbinic Judaism, Avery-Peck’s research focuses on early Rabbinic Judaism and the relationship between early Judaism and emergent Christianity, especially in the context of contemporary interfaith relations. Among other projects, he is part of a team of scholars and clergy producing a new presentation of the Revised Common Lectionary (http://readingsfromtheroots.bard.edu), that is, the list of Hebrew Bible and New Testament readings used in church worship. He is also a series editor and author for The New Testament Gospels in Their Judaic Context (Brill Publishers), and his commentary on Second Corinthians appears in The Jewish Annotated New Testament (Oxford University Press).

Claudia Setzer (Ph. D. Columbia) is Professor of Religious Studies at Manhattan College in Riverdale, NY. Her books include, The Bible in the American Experience (Society of Biblical Literature, 2020 with David Shefferman), The Bible and American Culture: A Sourcebook (Routledge, 2011, with David Shefferman), Resurrection of the Body in Early Judaism and Early Christianity (Brill, 2004), and Jewish Responses to Early Christians (Augsburg Fortress, 1994). She studies early Jewish-Christian relations, the development of belief in resurrection, women in the Greco-Roman era, nineteenth-century women interpreters of Scripture, and the Bible in American culture. She currently chairs the SBL group “The Bible in America” and is an associate editor for a forthcoming Study Bible from Westminster John Knox Press. In 2006, she founded the Columbia University Seminar on the New Testament. She is currently writing a book on the use of the Bible in progressive movements (abolitionism, women’s suffrage, civil rights, environmentalism, anti-trafficking).

Bruce Chilton ’71 is the Bernard Iddings Bell Professor of Philosophy and Religion and Director of the Institute of Advanced Theology at Bard College. He received his B.A. from Bard College; M.Div. and ordination to the diaconate and the priesthood from General Theological Seminary; and Ph.D. from Cambridge University. His books include Abraham’s Curse; Rabbi Jesus: An Intimate Biography; God in Strength; Rabbi Paul: An Intellectual Biography; Judaic Approaches to the Gospels; Mary Magdalene: A Biography; Revelation; Trading Places; Jesus’ Prayer and Jesus’ Eucharist; Forging a Common Future; Jesus’ Baptism and Jesus’ Healing; Visions of the Apocalypse; and Christianity: The Basics. He was editor in chief of Bulletin for Biblical Research and founding editor of Journal for the Study of the New Testament, Studying the Historical Jesus series (E. J. Brill and Eerdmans).
#