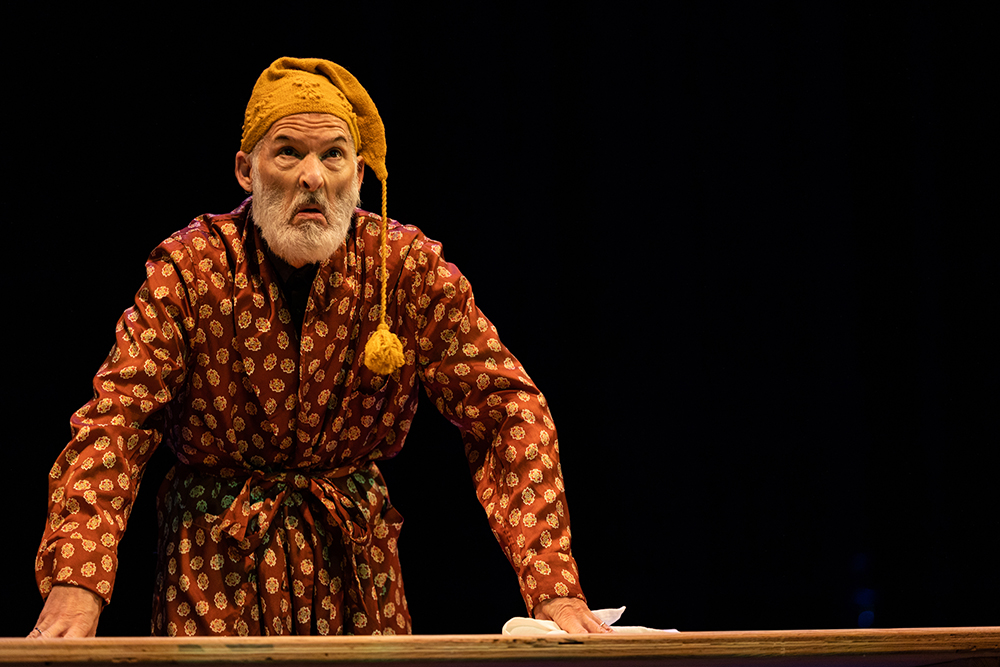 Ebenezer Scrooge (Will Bond) in A Christmas Carol. Photo by Chris Kayden


ANNANDALE-ON-HUDSON —The Fisher Center at Bard celebrates the holidays with two seasonal classics given fresh interpretations by world-renowned artists with deep connections to the college. Leon Botstein leads the Bard Conservatory Orchestra in a symphonic concert performance of Pyotr Tchaikovsky’s The Nutcracker on December 3, and the Fisher Center presents the world premiere of SITI Company’s reimagining of Charles Dickens’ A Christmas Carol, co-directed by Anne Bogart ‘74 and Tony Award winner Darron L West. The work, commissioned by the Fisher Center, is the final production in SITI Company’s 30th anniversary “Finale Season,” and runs for three performances, December 16-18.

In its special holiday performance on December 3, the 80-piece Bard Conservatory Orchestra, with a 24-member children’s chorus, takes on Tchaikovsky’s score for perhaps the most widely performed holiday classic, the two-act ballet The Nutcracker. The concert showcases the skill of the exceptional young players comprising the orchestra. It gives Fisher Center audiences a world-class rendering of the music, which Bard visiting associate professor of music Peter Laki, in a program note, contends is “the only thing critics liked about the piece from the start,” and is “what has ensured The Nutcracker’s place in the repertoire for 130 years, and is likely to keep it there.”

Gideon Lester, Artistic Director of the Fisher Center, says, “For 30 years, the legendary SITI Company has been one of the most inspiring and influential American theater ensembles. It’s an honor for the Fisher Center at Bard to collaborate with the company to create their ‘finale’ production—a wholly original adaptation of A Christmas Carol that brings Dickens’ words to new life through the theatrical power of imagination—in SITI’s inimitable style. Anne Bogart is a Bard alum, so this is a fitting homecoming. We’re delighted to continue our collaboration with her at her alma mater and to welcome her superb collaborators back to the Sosnoff Theater.”

Anne Bogart has said, “SITI Company and I are thrilled to return to Bard to share our encounter with Charles Dickens’ A Christmas Carol. I graduated from Bard in 1974, and my trajectory was deeply affected by all of my experiences there. Bard instilled in me a sense of adventure and an enduring curiosity.”

Bard Conservatory Orchestra, conducted by Leon Botstein, performs The Nutcracker on Saturday, December 3, at 8 pm EST, in the Fisher Center’s Sosnoff Theater. In-person tickets are available for a suggested donation of $15–20, and livestream access is pay-what-you-wish.

Fisher Center presents SITI Company’s A Christmas Carol Friday, December 16, at 8 pm; Saturday, December 17, at 6 pm; and Sunday, December 18, at 2 pm. Tickets are $25–65, with $5 tickets for Bard students made possible by the Passloff Pass and a 20% discount for groups of six or more.

Bard College Conservatory of Music expands Bard’s spirit of innovation in arts and education. The Conservatory, which opened in 2005, offers a five-year, double-degree program at the undergraduate level and, at the graduate level, programs in vocal arts, conducting, and instrumental performance, as well as Chinese music and culture. Also at the graduate level, the Conservatory offers an Advanced Performance Studies Program and a two-year Postgraduate Collaborative Piano Fellowship. The US-China Music Institute of the Bard College Conservatory of Music, established in 2017, offers a unique degree program in Chinese instruments. The Conservatory Orchestra has performed twice at Lincoln Center, and has completed three international concert tours to China, Hong Kong, and Taiwan; Russia and six cities in Central and Eastern Europe; and to three cities in Cuba. This year, the Conservatory has enrolled 176 undergraduate and graduate students from 20 different countries and 30 states. Many students hold named scholarships in recognition of their academic and musical excellence including the Bettina Baruch Scholarship, Y. S. Liu Foundation Scholarship, Joan Tower Composition Scholarship, Alexander Borodin Scholarship, Dr. Ingrid A. Spatt ’69 Memorial Flute Scholarship, and Stephen and Belinda Kaye Scholarship, among others.

Leon Botstein is music director and principal conductor of the American Symphony Orchestra (ASO), founder and music director of The Orchestra Now (TŌN), artistic codirector of Bard SummerScape and the Bard Music Festival, and conductor laureate of the Jerusalem Symphony Orchestra, where he served as music director from 2003 to 2011. He has been guest conductor with the Los Angeles Philharmonic, Royal Philharmonic Orchestra, Aspen Music Festival, Buffalo Philharmonic Orchestra, Mariinsky Theatre, Russian National Orchestra in Moscow, London Philharmonic, Taipei Symphony, Simón Bolivar Symphony Orchestra, and Sinfónica Juvenil de Caracas in Venezuela, among others. Recordings include a Grammy-nominated recording of Popov’s First Symphony with the London Symphony Orchestra, an acclaimed recording of Hindemith’s The Long Christmas Dinner with ASO, and recordings with the London Philharmonic, Jerusalem Symphony Orchestra, and TŌN, among others. He is editor of The Musical Quarterly and the author of numerous articles and books, including The Compleat Brahms (Norton), Jefferson’s Children (Doubleday), Judentum und Modernität (Böhlau), and Von Beethoven zu Berg (Zsolnay). Honors include Harvard University’s Centennial Award, the American Academy of Arts and Letters award, and Cross of Honor, First Class, from the government of Austria, for his contributions to music. Other distinctions include the Bruckner Society’s Julio Kilenyi Medal of Honor for his interpretations of that composer’s music, Leonard Bernstein Award for the Elevation of Music in Society, and Carnegie Foundation’s Academic Leadership Award. In 2011, he was inducted into the American Philosophical Society.

Anne Bogart is one of the three co–artistic directors of the SITI Company, which she founded with Japanese director Tadashi Suzuki in 1992. Bogart is a professor at Columbia University, where she runs its graduate directing program. Works with SITI include FALLING & LOVING; The Bacchae; Chess Match No. 5; Lost in the Stars; Persians; Steel Hammer; A Rite; Café Variations; Trojan Women (After Euripides); American Document; Antigone; Under Construction; Freshwater; Who Do You Think You Are; Radio Macbeth; Hotel Cassiopeia; Death and the Ploughman; La Dispute; Score; bobrauschenbergamerica; Room; War of the Worlds–the Radio Play; Cabin Pressure; Alice’s Adventures; Culture of Desire; Bob; Going, Going, Gone; Small Lives/Big Dreams; The Medium; Noël Coward’s Hay Fever and Private Lives; August Strindberg’s Miss Julie; and Charles Mee’s Orestes. Recent operas include The Handmaid’s Tale; Handel’s Alcina; Dvořák’s Dimitrij; Verdi’s Macbeth; Bellini’s Norma; and Bizet’s Carmen. Bogart is the author of six books: The Art of Resonance; A Director Prepares; The Viewpoints Book; And Then, You Act; Conversations with Anne; and What’s the Story.

Darron L West has been a SITI Company member since 1993. He is a TONY and OBIE award-winning sound designer whose 30-year career spans theater and dance, Broadway, and Off Broadway. His work has been heard in more than 600 productions all over the United States and internationally in 14 countries. Additional honors include the Drama Desk, Lortel, Audelco, and Princess Grace Foundation Statue awards, among others.

SITI Company was built on the bedrock of ensemble. They believe that through the practice of collaboration, a group of artists committed to working together over time can have a significant impact on both contemporary theater and the world at large. Through performances, educational programs, and collaborations with other artists and thinkers, SITI continues to challenge the status quo, to train, and to achieve artistic excellence in every aspect of their work, and to offer new ways of seeing and of being as both artists and as global citizens.

SITI is deeply committed to the training and development of young and emerging artists as well as a continuing dialogue with established artists. SITI has redefined contemporary theater in the US through innovative approaches to actor training, collaboration and cultural exchange. Mary Overlie’s Viewpoint work deeply influenced Anne Bogart and the Company continues to teach an evolving form of Viewpoints, inspired, informed and rooted in Overlie’s work. The world renowned director Tadashi Suzuki was instrumental in the founding of SITI Company and continues to support SITI’s work and teaching. The direct lineage of SITI's training with these pioneers has made Company members uniquely qualified to introduce artists to both of these essential and innovative techniques for nearly thirty years.

SITI has traveled to 27 countries on 5 continents and created nearly 50 productions, which have been presented at venues across the world. Widely known for highly innovative, physical productions that have ranged from new plays to original devised pieces to reinventions of classics, SITI has expanded the meaning of collaboration by creating work with Rachel’s, the Martha Graham Dance Company, Bill T Jones/Arnie Zane Dance Company, Ann Hamilton, Julia Wolfe and the Bang on A Can All Stars, and STREB Extreme Action.

About the Fisher Center

The Fisher Center develops, produces, and presents performing arts across disciplines through new productions and context-rich programs that challenge and inspire. As a premier professional performing arts center and a hub for research and education, the Fisher Center supports artists, students, and audiences in the development and examination of artistic ideas, offering perspectives from the past and present as well as visions of the future. The Fisher Center demonstrates Bard’s commitment to the performing arts as a cultural and educational necessity. Home is the Fisher Center for the Performing Arts, designed by Frank Gehry and located on the campus of Bard College in New York’s Hudson Valley. The Fisher Center offers outstanding programs to many communities, including the students and faculty of Bard College, and audiences in the Hudson Valley, New York City, across the country, and around the world. Building on a 162-year history as a competitive and innovative undergraduate institution, Bard is committed to enriching culture, public life, and democratic discourse by training tomorrow’s thought leaders.
The Center presents more than 200 world-class events and welcomes 50,000 visitors each year. The Fisher Center supports artists at all stages of their careers and employs more than 300 professional artists annually. The Fisher Center is a powerful catalyst for art-making regionally, nationally, and worldwide. Every year it produces 8 to 10 major new works in various disciplines. Over the past five years, its commissioned productions have been seen in more than 100 communities around the world. During the 2018–2019 season, six Fisher Center productions toured nationally and internationally. In 2019, the Fisher Center won the Tony Award for Best Revival of a Musical for Daniel Fish’s production of Oklahoma!, which began its life in 2007 as an undergraduate production at Bard and was produced professionally in the Fisher Center’s SummerScape Festival in 2015 before transferring to New York City.