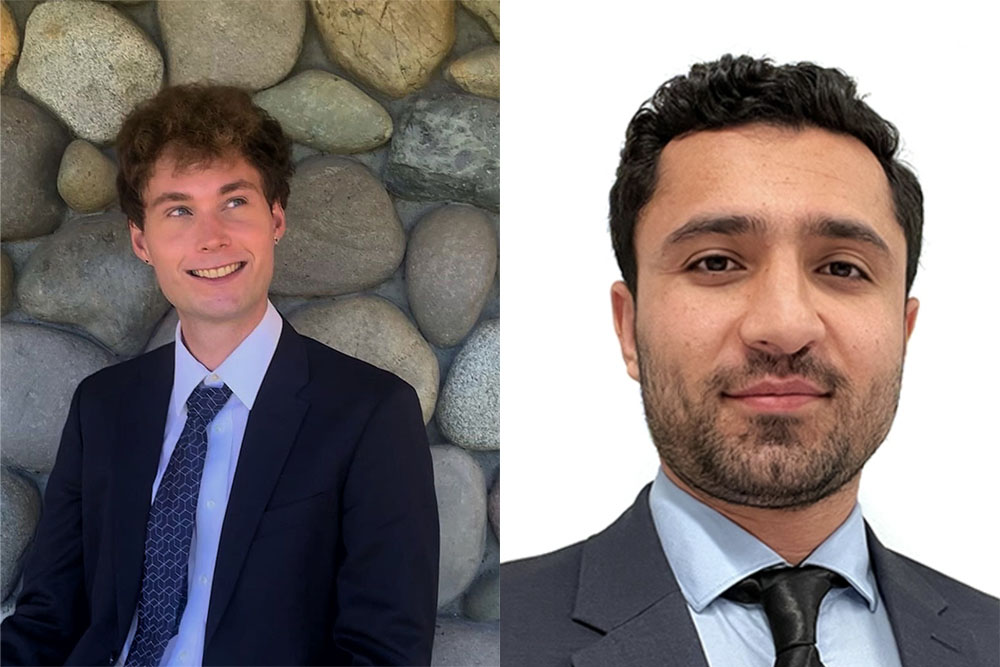 ANNANDALE-ON-HUDSON, N.Y.—Three Bard students have won prestigious Schwarzman Scholarships. Edris Tajik ’23, a student who is from Afghanistan studying at Bard College’s Annandale campus, Michael Nyakundi ’23, a student who is from Kenya studying at Bard College Berlin, and Evan Tims ’19, a Bard Annandale alumnus from Maine, have been selected to join the eighth class of Schwarzman Scholars, a fully-funded, one-year master’s degree and leadership program in Global Affairs at Tsinghua University in Beijing, China. Tajik, Tims, and Nyakundi are three of 151 scholars, from 36 countries and 121 universities, to be chosen out of almost 3,000 applicants. They are part of this year’s exceptional cohort, which comprises accomplished young leaders working at the forefronts of their industries, and will enroll in Schwarzman College at Tsinghua University in August 2023.

Evan Tims (Bard College ’19) grew up in coastal Maine, where he developed an early interest in the relationship between narrative, social justice, and environmental change. He earned a joint BA in human rights and written arts, received the Bard Written Arts Prize and the Christopher Wise Award in environmentalism and human rights for his Senior Project, and is the founder and director of the In 100 Years Project, an organization focused on building environmental dialogue through creative workshops. Tims is particularly focused on the social challenges of water in the 21st century. As a 2021–22 Henry J. Luce Scholar, he lived in Nepal and conducted research in the hydropower sector while leading climate engagement projects.

Edris Tajik (Bard College ’23) came to Bard last year from Afghanistan and is currently a senior majoring in Political Science. He has spent the past four years of his life on peace-building and youth empowerment projects through NGOs in Afghanistan. Edris has trained 240 students in Model United Nations and 120 students on peace-building initiatives as well as implemented six community-based projects.  Edris is a Generation Change fellow at the United States Institute of Peace and is currently interning with the National Committee on American Foreign Policy. He intends to pursue a career in international relations.

Michael Nyakundi (Bard College Berlin ’23) is a Kenyan national studying economics, politics, and social thought who is interested in criminal justice reform through public policy and law. He previously interned at the Kenyan State House analyzing the impact of President Kenyatta’s Big4 agenda and has volunteered with the Kenya Red Cross and Plan International on youth-police arbitration projects. Recently, Michael led a team of 500+ to address police brutality in Soweto slums Nairobi. His project, Project Ma3, co-won the Margarita Kuchma project award this past summer. As a Schwarzman Scholar, Michael hopes to deepen his knowledge of Sino-Kenya relations.

Schwarzman Scholars (est. 2015) is designed to meet the challenges of the 21st century and beyond. It was inspired by the Rhodes Scholarship, which was founded in 1902 in an effort to promote international understanding and peace.

Schwarzman Scholars supports up to 200 Scholars annually from the U.S., China, and around the world for a one-year master’s in global affairs at Beijing’s Tsinghua University — ranked first in Asia as an indispensable base for China’s political, business, and technological leadership.

Scholars chosen for this highly selective program will live in Beijing for a year of study and cultural immersion — attending lectures, traveling around the region, and developing a better understanding of China.

#
About Bard College
Founded in 1860, Bard College is a four-year, residential college of the liberal arts and sciences located 90 miles north of New York City. With the addition of the Montgomery Place estate, Bard’s campus consists of nearly 1,000 parklike acres in the Hudson River Valley. It offers bachelor of arts, bachelor of science, and bachelor of music degrees, with majors in more than 40 academic programs; graduate degrees in 13 programs; eight early colleges; and numerous dual-degree programs nationally and internationally. Building on its 161-year history as a competitive and innovative undergraduate institution, Bard College has expanded its mission as a private institution acting in the public interest across the country and around the world to meet broader student needs and increase access to liberal arts education. The undergraduate program at our main campus in upstate New York has a reputation for scholarly excellence, a focus on the arts, and civic engagement. Bard is committed to enriching culture, public life, and democratic discourse by training tomorrow’s thought leaders. For more information about Bard College, visit bard.edu.