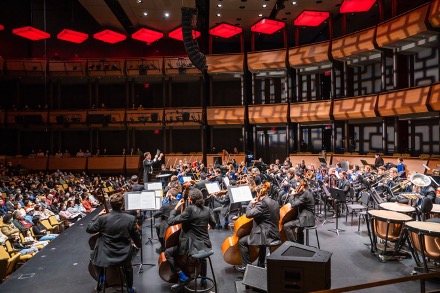 ANNANDALE-ON-HUDSON, NY—The US-China Music Institute of the Bard College Conservatory of Music, in collaboration with the Central Conservatory of Music, China, present the fourth annual The Sound of Spring: A Chinese New Year Concert with The Orchestra Now conducted by Director of the US-China Music Institute Jindong Cai. This special annual event, marking one of the most important holidays in the Chinese lunar calendar, showcases an exciting blend of Chinese American artists, Chinese symphonic music, and traditional instruments. Performances will take place on Friday, January 27, 2023 at 7pm in The Richard B. Fisher Center for the Performing Arts at Bard Collegeand on Saturday, January 28, 2023 at 3pm in the Rose Theater of Jazz at Lincoln Center’s Frederick P. Rose Hall in New York City. To purchase tickets for the January 27 Fisher Center concert, visit fishercenter.bard.edu, call 845-758-7900 (Mon-Fri 10am-5pm), or email [email protected]. For tickets to the January 28 Jazz at Lincoln Center concert, please visit ticketing.jazz.org, or call 212-721-6500.

This year’s concert will celebrate the Chinese Year of the Rabbit. As we have done with great success in our previous concerts, we aim to create the most authentic Chinese New Year musical event to reflect both traditional and contemporary music of China hand selected for our New York audience. Featuring the much-loved Butterfly Lovers Violin Concerto, this year’s concert promises to be full of enchanting stories and uplifting sounds.

The concert program will create a festive and celebratory atmosphere for music lovers young and old, illustrating the sophistication and dramatic artistry of Chinese symphonic music in our time. Butterfly Lovers will be the signature piece of the first half of the concert and will feature the virtuosic playing of violinist Na Sun, a member of the New York Philharmonic and a graduate of the prestigious Central Conservatory of Music. Also in the first half, erhu player Beitong Liu will reprise her prize-winning performance of ‘The Indominable Spirits of the Snow Mountain’ for erhu and orchestra. Beitong is a Concerto Competition winner and a senior in the first class of Chinese instrument performance majors at the Bard Conservatory of music. She is a student of renowned erhu master Yu Hongmei of the Central Conservatory of Music.

The concert’s second half will begin with Prancing Dragons and Jumping Tigers, a percussive showpiece of Chinese festive drumming. Two renowned living composers end the program, first with Zhou Long’s King Chu Doffs His Armorfor pipa and orchestra, based on the famous love story portrayed in the 1993 film Farewell My Concubine and featuring pipa virtuoso Gao Hong. The program will close with Guo Wenjing’s rousing and cinematic orchestral work Riding on the Wind.

“Music connects cultures and people. It helps us overcome obstacles and leave our differences behind. Please join us to celebrate the Year of the Rabbit and the love of music we all share!” writes Jindong Cai.

About the Artists
Conductor Jindong Cai is the founding director of the US-China Music Institute, professor of music and arts at Bard College, and associate conductor of Bard’s The Orchestra Now. Before coming to Bard, Cai was a professor of performance at Stanford University. Over the 30 years of his career in the United States, Cai has established himself as an active and dynamic conductor, scholar of Western classical music in China, and leading advocate of music from across Asia. At Bard, Cai founded the annual China Now Music Festival. In its first three seasons, China Now presented new works by some of the most important Chinese composers of our time, with major concerts performed by The Orchestra Now at Bard’s Fisher Center for the Performing Arts, Lincoln Center, Carnegie Hall, and Stanford University. In 2019, the festival premiered a major new work by Pulitzer Prize–winning composer Zhou Long, Men of Iron and the Golden Spike—a symphonic oratorio, in commemoration of the Chinese railroad workers of North America on the 150th anniversary of the completion of the Transcontinental Railroad.


Originally from Vásárosdombó, Hungary, percussionist Petra Elek graduated from Bard College with dual degrees in Percussion Performance and German Studies in 2018. She joined The Orchestra Now in 2020. During an internship with the US-China Music Institute, Petra studied with Central Conservatory of Music professor and famed Chinese percussionist Wang Jianhua.


Chinese musician and composer Gao Hong is a master of the pear-shaped lute, the pipa. She graduated from the Central Conservatory of Music in Beijing, where she studied with pipa master Lin Shicheng. In 2005 Gao became the first traditional musician to receive the prestigious Bush Artist Fellowship, and she is the only musician in any genre to win five McKnight Artist Fellowships for musicians. As a composer, she has received commissions from the Minnesota Orchestra, Minnesota Sinfonia, Civic Orchestra of Minneapolis, American Composers Forum, Walker Art Center, and Jerome Foundation, among others. Gao’s recording of live compositions/improvisations with oudist Issam Rafea, From Our World to Yours, received two Global Music Award gold medals (instrumental and album). As a performer, Gao has appeared on five continents in solo concerts and with symphony orchestras, jazz artists, and musicians from various cultures. She has performed at major festivals and venues worldwide, including the Lincoln Center Festival, San Francisco Jazz Festival, Festival d’Automne à Paris, Perth International Arts Festival, and others. Her performances of pipa concerti include world premieres with the China National Traditional Orchestra, Guangdong National Orchestra, and Hawaii Symphony; and world premiere recordings with the Boston Modern Orchestra Project and Moravian Philharmonic.


Beitong Liu is in her final year of the five double-degree program at the Bard College Conservatory of Music, where she is majoring in erhu performance and global and international studies. Beitong is in the first class to graduate from Bard with a degree in Chinese instrument performance offered through the US-China Music Institute. After graduation, Beitong plans to enroll in the Master of Arts in Chinese Music and Culture program at the US-China Music Institute. Through Bard’s partnership with the Central Conservatory of Music, she studies erhu with Professor Yu Hongmei. Beitong is originally from Shenyang in Liaoning Province, China. She began studying erhu in 2008, and entered the Shenyang Conservatory middle school in 2012 to study with Li Naiping. In 2017, she began study with Central Conservatory of Music erhu professors Yu Hongmei and Yan Guowei. In 2021, she performed as a soloist in The Sound of Spring Chinese New Year concert with The Orchestra Now (TŌN). Also that year, she won the Bard Conservatory Concerto Competition for her performance of The Indomitable Spirits of the Snow Mountain by Wenjin Liu. Every winner of this annual competition is given the opportunity to perform their chosen piece with The Orchestra Now, as Liu does in this concert.


Violinist Na Sun joined the New York Philharmonic in June 2006 and holds the Gary W. Parr Chair. A native of China, she began playing the violin at age seven, and at nine, was accepted into the Central Conservatory of Music in Beijing. She received her bachelor of arts degree there with highest honors, studying with Yao Ji Lin, and was winner of the conservatory’s violin competition. She received her artist diploma from Boston University’s College of Fine Arts in 2005, studying with Roman Totenberg, and was the grand prize winner of the Bach Competition. Sun has performed in numerous recital and chamber music concerts. In 2003, she attended the Kneisel Hall Chamber Music Festival in Blue Hill, Maine, and in 2005 served as concertmaster of Tanglewood Music Center Orchestra, led by James Levine.


The Orchestra Now (TŌN) is a group of vibrant young musicians from across the globe who are making orchestral music relevant to 21st-century audiences by sharing their unique personal insights in a welcoming environment. Hand-picked from the world’s leading conservatories—including the Yale School of Music, Shanghai Conservatory of Music, Royal Academy of Music, and the Eastman School of Music—the members of TŌN are enlightening curious minds by giving on-stage introductions and demonstrations, writing concert notes from the musicians’ perspective, and having one-on-one discussions with patrons during intermissions.

Conductor, educator, and music historian Leon Botstein, whom The New York Times said “draws rich, expressive playing from the orchestra,” founded TŌN in 2015 as a graduate program at Bard College, where he is also president. TŌN offers both a three-year master’s degree in Curatorial, Critical, and Performance Studies and a two-year advanced certificate in Orchestra Studies. The orchestra’s home base is the Frank Gehry-designed Fisher Center at Bard, where it performs multiple concerts each season and takes part in the annual Bard Music Festival. It also performs regularly at the finest venues in New York, including Carnegie Hall, Lincoln Center, The Metropolitan Museum of Art, and others across NYC and beyond. HuffPost, who has called TŌN’s performances “dramatic and intense,” praises these concerts as “an opportunity to see talented musicians early in their careers.”


About the US-China Music Institute
The US-China Music Institute was founded in 2017 by conductor Jindong Cai and Robert Martin, founding director of the Bard College Conservatory of Music, with the mission to promote the study, performance, and appreciation of music from contemporary China and to support musical exchange between the United States and China. In partnership with the prestigious Central Conservatory of Music in Beijing, the Institute has embarked on several groundbreaking projects including the first degree-granting program in Chinese instrument performance in a U.S. conservatory. barduschinamusic.org

About Bard College
Founded in 1860, Bard College is a four-year, residential college of the liberal arts and sciences located 90 miles north of New York City. With the addition of the Montgomery Place estate, Bard’s campus consists of nearly 1,000 parklike acres in the Hudson River Valley. It offers bachelor of arts, bachelor of science, and bachelor of music degrees, with majors in nearly 40 academic programs; graduate degrees in 11 programs; nine early colleges; and numerous dual-degree programs nationally and internationally. Building on its 161-year history as a competitive and innovative undergraduate institution, Bard College has expanded its mission as a private institution acting in the public interest across the country and around the world to meet broader student needs and increase access to liberal arts education. The undergraduate program at our main campus in upstate New York has a reputation for scholarly excellence, a focus on the arts, and civic engagement. Bard is committed to enriching culture, public life, and democratic discourse by training tomorrow’s thought leaders. For more information about Bard College, visit bard.edu.