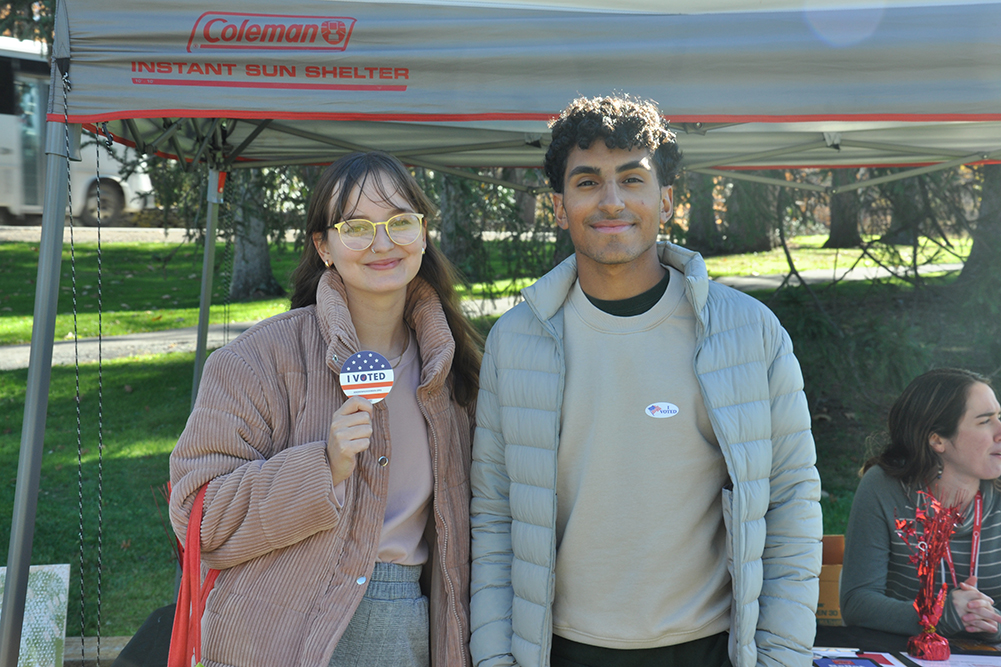 ANNANDALE-ON-HUDSON, N.Y.— Bard College is proud to announce that it has received a $399,000 award from the Mellon Foundation to support a three-year applied learning research curricular project on voting rights. The project, done in collaboration with North Carolina Agricultural and Technical State University, Tuskegee University, Prairie View A&M University, and The Andrew Goodman Foundation, will use the 26th Amendment, which lowered the voting age from 21 to 18 and outlawed age-based voter discrimination, as a prism through which to understand the history of voting and disenfranchisement in the United States and the role of college communities in the fight for voting rights.

The project will produce research and teaching materials on the history of voting rights, with a special focus on the 26th Amendment, in the form of written and video case studies, recorded lectures, and oral histories. These materials will be contextualized by the historic and contemporary struggles for voting rights on these campuses and will in turn be used in the classroom in codesigned and cotaught network collaborative courses that will take place simultaneously at the four main partner institutions of higher education: Bard College, North Carolina Agricultural and Technical State University, Tuskegee University, and Prairie View A&M University. The materials will also be used in trainings of student ambassadors of The Andrew Goodman Foundation, a national organization situated on 81 campuses across 26 states and Washington, D.C., including at these institutions, with a mission to make youth voices and votes a powerful force in democracy. The Andrew Goodman Foundation will lift up their students’ ongoing work on these campuses and across its network, and historically ground and help shape their future civic engagement activities as promoters and defenders of the right to vote.

This project highlights how academic institutions and their leaders can also serve as important civic actors in promoting and defending democratic principles. The four institutions centrally involved in the project offer unique insights into the role of colleges in the fight for voting rights, particularly the fight against discrimination based on race and age.

Bard College has for the last quarter century participated in four successful lawsuits, one federal and three state, grounded in the 26th Amendment, that established student voting eligibility, a polling site on campus, and the adoption of a state law mandating polling sites on college campuses with more than 300 registered student voters and outlawing campus gerrymanders.

Tuskegee University (then Tuskegee Institute) and its Dean of Students Charles Goode Gomillion were at the center of a boycott in response to the decision by the Town of Tuskegee to gerrymander town lines so as to exclude the majority of Black residents. Gomillion was the lead plaintiff in the landmark 1960 Supreme Court case, Gomillion v. Lightfoot, in which the court found – for the first time – that an election district boundary designed to exclude Blacks denied equal representation in violation of the 15th Amendment of the US Constitution.

North Carolina Agricultural and Technical State University (North Carolina A&T) was not only the home of the Greensboro Four and a critical catalyzing actor during the civil rights movement, but was featured in recent North Carolina state and federal cases Harper v. Lewis and Common Cause v. Runcho, which fought corrosive partisan gerrymandering in the state and ultimately caused the invalidation of the state map which divided the university’s campus into two congressional districts.

Prairie View A&M was involved in the only 26th Amendment case that went before the Supreme Court, Symm v. United States, which in 1979 established the rights of students to vote as residents where they attend college. Prairie View A&M students have subsequently led numerous efforts to fight voter harassment and intimidation, including more recently in a federal case for equal access to early on-campus voting opportunities.

Dr. Jelani M. Favors, the Henry E. Frye Distinguished Professor of History at North Carolina A&T State University, said, “North Carolina A&T State University is excited to partner with Bard College, Prairie View A&M, Tuskegee University, and The Andrew Goodman Foundation in launching this new teaching and research initiative. With support from the Mellon Foundation and the Open Society University Network, our institutions are poised to further highlight the legacy of civic action and social justice that have defined our campuses and to educate a new generation of students on the challenges that continue to threaten and undermine American democracy.”

Dr. Lisa Bratton, Associate Professor of History, Tuskegee University, said “I am thankful to Bard College for spearheading this collaboration and am excited about the opportunity to work with other HBCUs as we highlight the groundbreaking work of Charles Gomillion. This is yet another opportunity for students to learn more about the history that was made right here in Tuskegee.”

Jonathan Becker, Professor of Political Studies at Bard and Bard’s Vice President for Academic Affairs, who is the project’s Principal Investigator, said, “We are thrilled that the Mellon Foundation is supporting this project, which unites four universities and a non-profit that have been centrally involved in defending the rights of students to vote and the fight against race-based disenfranchisement. Young people are the country’s future and defending their voting rights is essential to a healthy democracy.”

Yael Bromberg, Esq., a constitutional rights attorney, leading legal scholar of the Twenty-Sixth Amendment and lecturer at Rutgers Law School, who additionally serves as Special Counsel and Strategic Advisor to the President/CEO of The Andrew Goodman Foundation, said, “This unique applied learning collaboration will be the first to examine and conceptualize the ways in which a protected class of voters – youth voters – experience and fight against unconstitutional violations of the right to vote, and the unique role of academic institutions in supporting them. The collaboration is special in that we will train and inspire young democracy practitioners, based on the studied experiences of their peers across the country, how to effectively organize and advocate, and when necessary, litigate, for social change.”

About The Andrew W. Mellon Foundation
The Andrew W. Mellon Foundation is the nation’s largest supporter of the arts and humanities.  Since 1969, the Foundation has been guided by its core belief that the humanities and arts are essential to human understanding.  The Foundation believes that the arts and humanities are where we express our complex humanity, and that everyone deserves the beauty, transcendence, and freedom that can be found there. Through our grants, we seek to build just communities enriched by meaning and empowered by critical thinking, where ideas and imagination can thrive. mellon.org