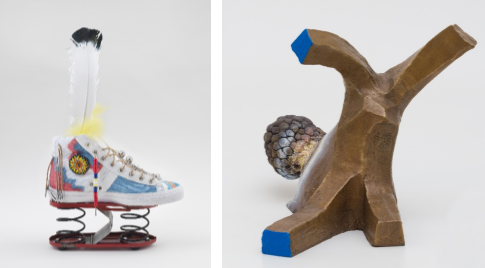 Season Opens with Exhibitions Curated by CCS Bard’s Graduating Class
ANNANDALE-ON-HUDSON, NY—The Center for Curatorial Studies, Bard College (CCS Bard) today unveiled its 2023 spring and summer exhibition lineup at the Hessel Museum of Art, highlighting the work of the next generation of curatorial practitioners advancing the field; the first large-scale presentation dedicated to the role of performance in contemporary Native American art; and a thought-provoking study of Erika Verzutti’s form-defying sculptural practice. Acclaimed for its experimental contemporary art programming, the Hessel Museum of Art is a critical platform for CCS Bard curatorial staff, faculty, students, and visiting scholars to contribute new narratives and approaches to exhibition-making.

The 2023 exhibitions span genre, geography, and art histories, reflecting the diverse scope and depth of curatorial inquiry that defines CCS Bard’s graduate program. The forthcoming season features a series of 16 graduate exhibitions independently curated by the graduating members of CCS Bard’s master’s program. It also inaugurates a major initiative in partnership with Forge Project to bring greater focus to Indigenous art scholarship and exhibition histories. Indian Theater (working title) posits a new origin for contemporary Native art, one rooted in 1960s experimental performance practices and featuring works by more than 30 artists, including new commissions. Opening in conjunction is Erika Verzutti: Oil Moon, which traverses the artist’s practice over a 15-year period of melding traditional and vernacular materials to create sculptural forms with rich associations spanning the historical to the philosophical.

“From performance activations in the galleries, to in-depth examinations of a single artist’s practice, the spring and summer season engages audiences with the role of contemporary art making in responding to our current moment through the lens of personal identity, history, and society,” said Tom Eccles, Executive Director, CCS Bard. “Building on our mission of cultivating curatorial thought leadership that breaks new ground, our goal is for the underrepresented narratives and new scholarship presented at the Hessel Museum to continue to have a life beyond its walls.”


More information on each exhibition follows below.


CCS Bard Class of 2023 Graduate Exhibitions
April 1 – May 28, 2023
A capstone of CCS Bard’s master’s program, the 2023 graduating class will present 16 exhibitions featuring new commissions, original narratives, and fresh readings on works and themes represented in the Hessel Collection. Each exhibition is independently curated by a member of CCS Bard’s graduating class, who began their study in Fall 2021, and is developed through the graduate program.
The exhibitions are organized by Katherine Adams, María Carri, Marina Caron, Leo Cocar, Liv Cuniberti, Rachel Eboh, Mary Fellios, Jiwon Geum, Abel Gonzalez, Kyle Herrington, Claire Kim, Zehra Begüm Kışla, Sidney Pettice, Ursula Pokorny, Olivia Rodrigues, and Calvin Wang. They are made possible with support from the Rebecca and Martin Eisenberg Student Exhibition Fund; the Mitzi and Warren Eisenberg Family Foundation; the Robert Mapplethorpe Foundation; the Board of Governors of the Center for Curatorial Studies; the CCS Bard Exhibition Circle; and by the Center’s patrons, supporters, and friends. Additional support is provided by the OSUN Center for Human Rights & the Arts at Bard for select exhibitions.

Indian Theater (working title)
June 24 – November 26, 2023
Indian Theater (working title) inaugurates Bard College’s Center for Indigenous Studies and will explore Native North American art through the framework of performance, abstraction, and material experimentation that emerged from the Institute of American Indian Arts’ theatre department in the late 1960s. The first large-scale exhibition of its kind to center performance as the origin point for contemporary Indigenous practice, Indian Theater (working title) will feature over 100 works that engage notions of sound and instrumentation, dress and adornment, and the body and its absence by artists representing a range of geographies and cultural viewpoints, including Dana Claxton (Lakota), Ishi Glinsky (Tohono O’odham), Jeneen Frei Njootli (Vuntut Gwitchin), and James Luna (Payómkawichum, Ipai, and Mexican), among many others. The exhibition features key selections from Forge Project’s lending collection, archival materials, and newly commissioned activations by Rebecca Belmore (Anishinaabe) and Eric-Paul Riege (Diné).

Curated by Candice Hopkins (Carcross/Tagish First Nation), Forge Project’s Executive Director and CCS Bard Fellow in Indigenous Art History and Curatorial Studies, this major exhibition celebrates the partnership established in 2022 with Forge Project to provide dedicated programming on key topics and methods in Native American and Indigenous studies throughout the Bard network. Indian Theater (working title) will be accompanied in the fall by the release of the first publication dedicated to the evolution of Native North American performance in contemporary art over the past 60 years, with newly commissioned essays and reprints of critical texts by leading Indigenous scholars and artists.
Indian Theater (working title) is made possible by the Teiger Foundation and The Kaleta A. Doolin Foundation. The exhibition is also made possible through the Bard College’s American and Indigenous Studies endowment, generously supported by the Gochman Family Foundation, George Soros, and the Open Society Foundations.


Erika Verzutti: Oil Moon
June 24 – October 15, 2023
This solo exhibition will spotlight the originality, intelligence, and material pleasure in the singular practice of Brazilian artist Erika Verzutti through a survey of sculpture and wall works from over the past 15 years.

Many lines of inquiry—studies of art history, of being, of the natural world, and the cosmos—underlie Verzutti’s practice. Dissimilar elements are often combined in her works which hang evocatively between figuration and abstraction. Allusions to human, animal, and plant life merge with references to architects and artists such as painter Tarsila do Amaral, landscape architect Roberto Burle Marx, and sculptor Constantin Brâncuşi, among many more. Yet, unlike the fixed lineages and styles she references, Verzutti’s distinctive forms often point to their own making by revealing the trace of her hand—sometimes even her fingerprints. Presented alongside a new book, Verzutti’s featured works open paths to consider the material possibilities for art’s form while broaching questions related to process, history, and “the indiscipline of sculpture.”

The exhibition is curated by Lauren Cornell, Chief Curator of the Hessel Museum of Art and Director of the Graduate Program at CCS Bard.

2023 Spring and Summer Season Organization
Exhibitions at CCS Bard and the Hessel Museum of Art are made possible with generous support from Lonti Ebers, the Marieluise Hessel Foundation, the Robert Mapplethorpe Foundation, the Board of Governors of the Center for Curatorial Studies, the CCS Bard Exhibition Circle, and the Center’s Patrons, Supporters, and Friends.

About the Hessel Museum of Art
CCS Bard’s Hessel Museum of Art advances experimentation and innovation in contemporary art through its dynamic exhibitions and programs. Located on the campus of Bard College in Annandale-on-Hudson, the Hessel organizes and presents group exhibitions and thematic surveys, monographic presentations, traveling exhibitions, as well as student-curated shows that are free and open to the public. The museum’s program draws inspiration from its unparalleled collection of contemporary art, which features the Marieluise Hessel Collection at its core and comprises more than 3,000 objects collected contemporaneously from the 1960s through the present day.

The Center for Curatorial Studies, Bard College
The Center for Curatorial Studies, Bard College (CCS Bard) is the leading institution dedicated to curatorial studies, a field exploring the conditions that inform contemporary exhibition-making and artistic practice. Through its Graduate Program, Library and Archives, and the Hessel Museum of Art, CCS Bard serves as an incubator for interdisciplinary practices, advances new and underrepresented perspectives in contemporary art, and cultivates a student body from diverse backgrounds in a broad effort to transform the curatorial field. CCS Bard’s dynamic and multifaceted program includes exhibitions, symposia, publications, and public events, which explore the critical potential of the practice of exhibition-making.