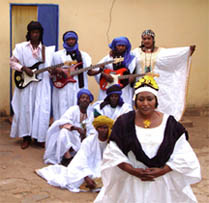 Malian Diva Invokes the Mystery, History, and Heart of Timbuktu

Annandale-on-Hudson, N.Y. —Malian singer Khaïra Arby blends desert blues and urban sophistication, mixing ripping electric guitar with the forefather of the banjo, and funky drum breaks with the traditional percussion of the scraper and the calabash. Arby and her band will kick off a nine-week American tour at the Bard SummerScape Spiegeltent, as part of the Thursday Night Live series, on August 12 at 8:30 p.m. Admission is $10 and advance tickets are available at the Fisher Center box office, 845-758-7900, or fishercenter.bard.edu.

Arby comes from the desert village of Abaradjou, near Timbuktu, Mali. Her music takes the listener on an audio journey across the essence of Mali and Timbuktu, a meeting of compass points, religions, and cultures, past and present. The instrumentation and rhythms are varied with electric guitar and bass, calabash, ngoni, traditional violin, and percussion creating a complex mixture of sound and structure. With her band she creates a mesmerizing mix of nomadic and urban music.

The Bard SummerScape Spiegeltent’s Thursday Night Live series presents an eclectic range of live music by performers from the Hudson Valley and beyond, hosted by Raissa St. Pierre, DJ of WKZE’s Radio Archaeology and associate director of the Bard Music Festival.

Khaïra Arby (pronounced: Hī-ra Arbē), the Nightingale of the North, was born in the village of Abaradjou in the Sahara Desert north of Timbuktu. Arby’s parents came from different ethnic backgrounds, her mother Songhai and her father Berber. You can hear these cultures in her music; she sings in several languages. Arby lives in Timbuktu with her family. She performs at concerts and festivals throughout Mali and France. She has appeared several times with her band at the mythic Festival in the Desert in Essakane and at the Festival on the Niger River in Segou. In 2006 she was named a Chevalier de l'Ordre National du Mali.

About the Bard Spiegeltent

Back for its fifth SummerScape season, Bard’s glittering “Mirror Tent” was originally from Europe, where such tents and the special entertainment they host have been a beloved tradition for the past century. The Spiegeltent is a marvel of engineering, comprising 3,000 detachable parts, with a spellbinding interior of carved wood surfaces, parquet floor, beveled mirrors, stained-glass windows, and splendid velvet canopies. The authentic, one-of-a-kind Belgian Spiegeltent, the luxurious “tent of mirrors,” that has proved such a sensation since 2006, when its introduction to Bard marked the first time one of these fabled old-world structures appeared in America; the New York Times pronounced it “agreeably funky,” while the Village Voice praised its “wooden floors, mirrored walls, stained-glass panels, and red velvet ceiling.” Conveniently situated near the Frank Gehry–designed Fisher Center, the Spiegeltent affords a sumptuous and magical environment in which to enjoy cutting-edge cabaret and musical performances— almost all of which sold out last year—plus family fare, late-night dancing, and tasty refreshments throughout the seven-week festival (July 8 – August 22).

The Minivans present old-school country and western music – one song swings, the next one rocks.  Hailing from Hillsdale, New York, the group comprises Kiki and Binky, the fabulous Dufault sisters; Jim Krewson on bass and high, lonesome vocals; Sauerkraut Seth, wielding guitar and, once in a while, crooning some downright rockabilly; fiddler Lukas Schwartz; Pete Adams on steel guitar; and Rick Leab on the plywood box.

Composer, musician, singer, and instrument-maker extraordinaire Brian Dewan plays autoharp and accordion and sings songs with historical and geographical themes, touching on scientific breakthroughs, natural disasters, and society at large. The versatile musician also appears as half of the double-act Dewanatron, which inspired this from the Los Angeles Times: “At full roar, the Dewanatron experience howled and warbled with demented mid-1960s fervor, all simple rhythms laced up with complex and freakish electronic wails, a retrofuturistic journey to the reinvention of the synthesizer. What more do you want from a Sunday night?”

“You Can’t Be Serious! Viennese Popular Music and Operetta” (August 19)

Described by the Los Angeles Times as “uniquely stimulating,” the world-renowned Bard Music Festival returns for its 21th annual season with an exploration of “Berg and His World.” Weekend Two—“Berg the European”—takes stock of the diversity of music between the wars, with light relief provided by Program Eight: “You Can’t be Serious! Viennese Popular Music and Operetta.” With piano accompaniment, singers perform extracts from chamber operas and cabaret songs by such varied exponents of the art as Johann Strauss II, Arthur Sullivan, Erich Wolfgang Korngold, Franz Léhar, Franz Schreker, and Alban Berg himself. The performance is complemented by commentary from Professor Derek B. Scott, author of such publications as The Singing Bourgeois, and whose fields of expertise include music-hall songs and drawing-room ballads.

Friday and Saturday nights are for adults only, with Evening Cabaret featuring colorful entertainment with a downtown edge, for hip audiences. Returning this year is the award-winning John Kelly, with his “worshipful and lovingly devastating” (New York Times) homage to Joni Mitchell; the seductive slapstick of the Wau Wau Sisters; and the ever-popular Bindlestiff Family Cirkus. The majority of Evening Cabaret shows sold out last summer, so early booking is advised!

Friday and Saturday nights continue with the SpiegelClub, which offers a late-night bar and dance floor with New York City and Hudson Valley DJs spinning a variety of tunes on a state-of-the-art sound and lighting system. It’s an exhilarating summer setting where audiences and artists gather under the disco ball to enjoy a range of dance music from pop to hip-hop, funk, and jazz, as well as the occasional theme night (swing, 80s, and more). Drinks and snacks are available throughout the evening.

Bard’s weekend Afternoon Family Fare offers entertainment of every stripe for audiences of all ages, by singers, dancers, puppeteers, magicians, and more – including Bindlestiff Family Cirkus, whose presentations this year include a showcase of variety performers under the age of 21.

Hi resolution images can be downloaded from: