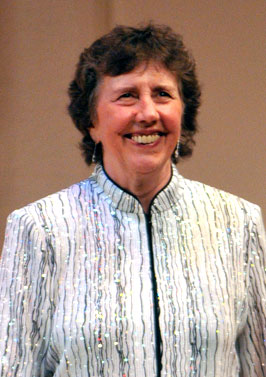 ANNANDALE-ON-HUDSON, N.Y.—Joan Tower, Asher B. Edelman Professor in the Arts at Bard College, is being honored as Pittsburgh Symphony Orchestra’s 2010–11 Composer of the Year. As Composer of the Year, Tower is having six works performed by the Pittsburgh Symphony Orchestra (PSO) this season, including the world premiere of an orchestral work commissioned by PSO and a clarinet concerto with principal clarinet Michael Rusinek as soloist. Tower is also participating in master classes with university composition students, coachings, lectures, and other audience outreach programs designed to familiarize listeners with her and her work, creating a connection between living composers and audiences.

“Working with the PSO is a dream come true,” says Tower. “I don’t know of any orchestra that plays FIVE pieces of a living composer in one season! That is a commitment that is truly exciting in the world of major orchestras, and shows a unique vision toward the living composer. They have already tackled some very challenging pieces of mine with hard work, and a sophisticated and passionate playing. I am indeed blessed.”

Leonard Slatkin, a champion of Tower’s work since he named her composer-in-residence with the St. Louis Symphony in the early 1980s, led off her Composer of the Year celebration with Made in America and For the Uncommon Woman, two of Tower’s most well-loved works. “Joan’s music goes exactly with her,” says Slatkin. “She is a terrific personality, great with people.” Andrew Druckenbrod of the Pittsburgh Post-Gazette says, “Rarely do the music of a composer and her personality match as well as those of Joan Tower. After only a few minutes into a conversation with the gregarious, thoughtful and intense woman, her inviting and energetic music makes even more sense. Hardly a point is made without a hearty, easygoing laugh —the sort of warm color that streams through her rhythmically charged music.”

In its tenth year, the Pittsburgh Symphony’s Composer of the Year program provides audiences with many opportunities to experience living composers and their music, not only at orchestral concerts but also in discussions, chamber music performances, and student coaching in the metropolitan Pittsburgh area. Past Composers of the Year have included John Corigliano, Richard Danielpour, and John Adams.

ABOUT JOAN TOWER
Since 1972, Joan Tower has taught at Bard College, where she is Asher B. Edelman Professor in the Arts. She is widely regarded as one of the most important American composers living today. During a career spanning more than 50 years, Tower has made lasting contributions to musical life in the United States as composer, performer, conductor, and educator. She has received commissioned from the New York Philharmonic, St. Louis, Chicago, Pittsburgh, and Houston Symphonies, Carnegie Hall, and Lincoln Center Chamber Society, among many other major ensembles, soloists, and orchestras. She was the first composer chosen for a Ford Made in America consortium commission for 65 orchestras. Leonard Slatkin and the Nashville Symphony recorded Made in America in 2008 (along with Tambor and Concerto for Orchestra). The album collected three Grammy awards: Best Classical Contemporary Composition, Best Classical Album, and Best Orchestral Performance.

In 1990, she became the first woman to win the prestigious Grawemeyer Award for Silver Ladders, a piece she wrote for the St. Louis Symphony where she was composer-in-residence from 1985–88. She has just completed a 10-year residency with the Orchestra of St. Luke’s (1997–2007) and is now in residence at the Pittsburgh Symphony (2010–2011). Other accolades include the 1998 Delaware Symphony’s Alfred I. DuPont Award for Distinguished American Composer, the 2002 Annual Composer’s Award from the Lancaster (PA) Symphony, an honorary degree from the New England Conservatory (2006), and fellowships from the National Endowment for the Arts, Guggenheim Foundation, New York State Council on the Arts, Koussevitsky Foundation, American Academy of Arts and Letters, and “Meet the Composer”/Reader’s Digest.

Tower studied piano and composition at Bennington College, where she received a B.A., and at Columbia University, where she received her M.A. and D.M.A. degrees. She cofounded the award-winning Da Capo Chamber Players in 1969 as pianist, also writing several well-received pieces for the ensemble. She was inducted into the prestigious American Academy of Arts and Letters in 1998, and into the Academy of Arts and Sciences at Harvard University in the fall of 2004. Her CDs have been released on Koch International, Delos, and d’Note Records. Her music is published by Associated Music Publishers.