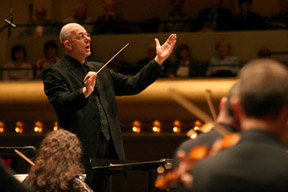 The Richard B. Fisher Center for the Performing Arts Presents the American Symphony Orchestra

ANNANDALE-ON-HUDSON, N.Y. — The Richard B. Fisher Center for the Performing Arts at Bard College presents the American Symphony Orchestra (ASO) on Friday, April 27 and Saturday, April 28, at 8 p.m. The concert will be conducted by Leon Botstein, music director, with a preconcert talk by Peter Laki beginning at 7 p.m. Individual tickets are $25, $35, and $40. Call 845-758-7900 or visit the Fisher Center website at fishercenter.bard.edu to purchase tickets or for further information.

The program for the final concert of the 2011–12 season features the world premiere of Howard Shore’s Mythic Gardens, Concerto for Cello and Orchestra. Commissioned by the ASO, Shore composed the concerto for cellist Sophie Shao, who will premiere the work. “The work was inspired by the architecture of three classic Italian gardens: Cimbrone, Medici, and Visconti Borremeo Litta,” says Shore. Mythic Gardens is a companion piece to Shore’s 2010 piano concerto Ruin and Memory, which he composed for Lang Lang.

“I am so excited to premiere this complex piece, full of such beautiful and dramatic moments,” says Shao. “Just to have the opportunity to perform a Howard Shore work in front of a live audience is a thrill.”

For more information, contact the Fisher Center box office at 845-758-7900, or go to fishercenter.bard.edu/.

Leon Botstein has been music director and principal conductor of the American Symphony Orchestra since 1992, and is conductor laureate of the Jerusalem Symphony Orchestra, where he served as music director from 2003–2011. He is also the founder and artistic director of the SummerScape festival and the Bard Music Festival, now in its 23rd year. He has been president of Bard College in New York since 1975. Botstein maintains an active schedule as a guest conductor throughout the world. Recent engagements include the Russian National Philharmonic and the Melos-Ethos Contemporary Music Festival in the Slovak Republic. Upcoming engagements include the Los Angeles Philharmonic, Hawaii Symphony, and Taipei Symphony among others. He may also be heard on numerous recordings, including operas by Strauss, Dukas, and Chausson, as well as works of Shostakovich, Dohnányi, Liszt, Bruckner, Bartók, Hartmann, Reger, Glière, Szymanowski, Brahms, Copland, Sessions, Perle, and Rands. Many recordings of his concerts with the American Symphony Orchestra are now available for download on the Internet. Botstein is the editor of The Musical Quarterly and the author of numerous articles and books. This year he gave the prestigious Tanner Lectures in Berkeley, California. For his contributions to music he has received the award of the American Academy of Arts and Letters and Harvard University’s prestigious Centennial Award, as well as the Cross of Honor, First Class from the government of Austria. He is a 2009 recipient of the Carnegie Foundation’s Academic Leadership Award and was recently inducted into the American Philosophical Society.

Founded in 1962 by legendary conductor Leopold Stokowski, the American Symphony Orchestra continues its mission to demystify orchestral music, and make it accessible and affordable to everyone. Under music director Leon Botstein, the ASO has pioneered what the Wall Street Journal called “a new concept in orchestras,” presenting concerts curated around various themes drawn from the visual arts, literature, politics, and history, and unearthing rarely performed masterworks for well-deserved revival. These concerts are performed in the Vanguard Series at Carnegie Hall. The orchestra also performs in the celebrated concert series Classics Declassified at Peter Norton Symphony Space, and is the resident orchestra of The Richard B. Fisher Center for the Performing Arts at Bard College, where it appears in a winter subscription series as well as Bard’s annual SummerScape festival and the Bard Music Festival. In 2010, the American Symphony became the resident orchestra of The Collegiate Chorale, performing regularly in the Chorale’s New York concert series. The orchestra has made several tours of Asia and Europe, and has performed in countless benefits for organizations including the Jerusalem Foundation and PBS. ASO’s award-winning music education program, Music Notes, integrates symphonic music into core humanities classes in high schools across the tristate area. In addition to many albums released on the Telarc, New World, Bridge, Koch, and Vanguard labels, many live performances by the American Symphony are now available for digital download. In many cases, these are the only existing recordings of some of the rare works that have been rediscovered in ASO performances.