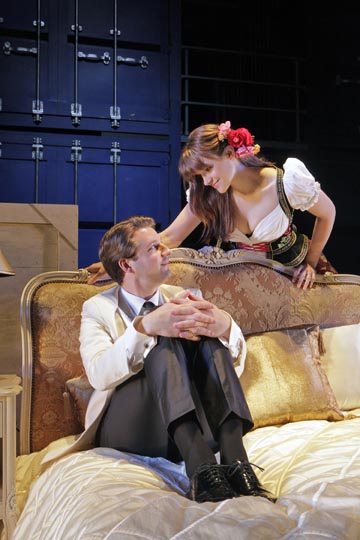 To enrich its immersion in the music of Belle Époque France, Bard SummerScape 2012 presents the first staged revival of The King in Spite of Himself (Le roi malgré lui) by Emmanuel Chabrier in its original 1887 version. The production, starring the “lyrical, expressive baritone” (New York Times) of Liam Bonner, will receive a contemporary treatment from Thaddeus Strassberger, whose previous SummerScape opera treatments rank among Bard’s undisputed success stories; as Opera News recently observed, “Few young stage directors in opera have demonstrated an intellectual drive to match Thaddeus Strassberger’s.” The opera’s five performances (July 27 & 29; August 1, 3, & 5) feature the festival’s resident American Symphony Orchestra with music director Leon Botstein, whose 2005 concert performance of the opéra-comique was “vibrant and assured” (New York Times). This summer, drawing the 23rd annual Bard Music Festival’s exploration of “Saint-Saëns and His World” – and the entire seven weeks of Bard SummerScape – to a thrilling close, Botstein also leads an all-too-rare concert performance of Saint-Saëns’s own grand opera Henry VIII on Sunday, August 19.

“There was great interest in staging a comic opera at SummerScape – something we have not yet done. And the score for this Chabrier work is one of the great, unjustly neglected opera scores – truly great music that should be performed. In tandem with our concert performance of Saint-Saëns’s Henry VIII, it gives us a taste of the extraordinary variety and appeal of late 19th-century French opera.”

It was the eminent conductor-scholar who, in concert with the American Symphony Orchestra, first returned to the text of The King in Spite of Himself’s 1887 premiere, to the gratified delight of the New York press. The New York Times’s Anthony Tommasini reported:

“Leon Botstein, that tireless champion of the unjustly overlooked, has come to the rescue of an even more neglected Chabrier comedy, Le roi malgré lui (‘The King in Spite of Himself’). … Mr. Botstein led…a vibrant and assured concert performance of this utterly enchanting work from 1887. … From the wondrous opening fanfare for brass and winds, with its wayward phrase structure and playful hints of medieval harmony, the score is glorious. … Mr. Botstein deserves the most credit for bringing us this inexplicably neglected opera.”

Now Bard is in the happy position of restoring Chabrier’s masterpiece in its original form to the opera house in a new, fully-staged production, highlighting Botstein’s tried and tested musical direction in a modern treatment by Thaddeus Strassberger. Of the director’s previous SummerScape productions, Les Huguenots was pronounced “a triumph” (Wall Street Journal) and a thriller from beginning to end. …Five Stars” (Financial Times), while The Distant Sound was named one of New York magazine’s “Top Ten Classical Music Events of 2010.”

[To download high-resolution images from rehearsals for The King in Spite of Himself, click here, or go to http://fishercenter.bard.edu/press/photos.php?group_id=208406.]

In addition to the fully staged opera, SummerScape 2012 also presents a rare concert performance of Saint-Saëns’s grand opera Henry VIII. Today, the composer’s operatic reputation rests solely on Samson and Delilah; even during his lifetime, he occupied an unusual position in French music, being better-known for his orchestral and chamber works. Yet Reynaldo Hahn, writing for the composer’s centenary in 1935, argued that a performance of Henry VIII would convince the skeptical that Saint-Saëns was indeed a “man of the theater.” Such revivals, however, are few and far between, especially outside Europe; consequently, Bard’s full orchestral concert presentation should be prized all the more highly. The performance will showcase soprano Ellie Dehn, recently described as “a revelation” (Chicago Sun-Times) and Juno Award-winning tenor John Tessier, supported by the Bard Festival Chorale with James Bagwell, Music Director of the Collegiate Chorale and Bard Music Festival’s Director of Choruses since 2003. With Botstein and the American Symphony Orchestra, the performance on August 19 will follow a pre-concert talk by French music specialist Hugh Macdonald, General Editor of the Complete Edition of the Works of Hector Berlioz.

As Musical America remarks, “Bard’s annual opera has become an indispensable part of the summer operatic landscape because the choice of works is invariably inspired and their productions distinctively creative.”

Sung in French, with English supertitles

Special support for The King in Spite of Himself is provided by Emily H. Fisher and John Alexander.

The Opera Talk is presented in memory of Sylvia Redlick Green.

Entitled “Out of the Shadow of Samson and Delilah: Saint-Saëns’s Other Grand Opera,” this concert represents the final program of the 23rd annual Bard Music Festival.

* Round-trip transportation from Manhattan to Bard is available for this performance. The round-trip fare is $30 and reservations are required.

Highlights of the Bard SummerScape Festival 2012

Culture at the crossroads in Belle Époque France will be explored at the Bard SummerScape festival, which once again features a sumptuous tapestry of music, opera, theater, dance, film, and cabaret, keyed to the theme of the 23rd annual Bard Music Festival. Presented in the striking Richard B. Fisher Center for the Performing Arts and other venues on Bard College’s bucolic Hudson River campus, the seven-week festival opens on July 6 with the first of three performances by France’s Compagnie Fêtes galantes, and closes on August 19 with a party in Bard’s beloved Spiegeltent, which returns for the full seven weeks.

This year’s Bard Music Festival explores “Saint-Saëns and His World,” and some of the great French composer’s most innovative compatriots provide other SummerScape highlights, including Emmanuel Chabrier’s opéra-comique The King In Spite of Himself in a first staged revival of the original 1887 version; Molière’s final comedy of manners, The Imaginary Invalid (1673); and a film festival, “France and the Colonial Imagination.” Together, Bard’s offerings present a vivid portrait of a dazzlingly creative and colorful era in European history: a Golden Age of promise and possibility that came to end with the tragedy of World War I. A list of key performance dates follows below.

Bard Music Festival, Weekend One: “Saint-Saëns and His World: Paris and the Culture of Cosmopolitanism” (August 10–12)

* Round-trip transportation from Manhattan to Bard is available for this performance. The round-trip fare is $30 and reservations are required.

† Round-trip shuttle between the MetroNorth train station in Poughkeepsie and Bard is available for this performance. The round-trip fare is $20 and reservations are required.

“France and the Colonial Imagination”

For tickets and further information on all SummerScape events, call the Fisher Center box office at 845-758-7900 or visit www.fishercenter.bard.edu.