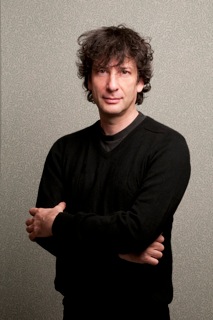 ANNANDALE-ON-HUDSON, N.Y.—Bard College announces the appointment of Neil Gaiman as Professor in the Arts. Gaiman, who joins the College in the spring semester of 2014 as a member of the Theater and Performance faculty, will teach courses across the Division of the Arts and the Division of Languages and Literature. His first course will be an advanced writing workshop exploring the history of the fantastic, approaches to fantasy fiction, and the meaning of fantasy today, taught through the Written Arts Program and the Experimental Humanities concentration.

Neil Gaiman is listed in the Dictionary of Literary Biography as one of the top ten living post-modern writers and is a prolific creator of works of prose, poetry, film, journalism, comics, song lyrics, and drama. His work crosses genres and reaches audiences of all ages. His most recent adult novel, The Ocean at the End of the Lane is a #1 New York Times Bestseller; other adult works include Neverwhere, Stardust, Anansi Boys, and Good Omens (with Terry Pratchett); the award-winning Sandman series of graphic novels; and the short story collections Smoke and Mirrors and Fragile Things. His novels for younger readers include Coraline and The Graveyard Book, which was awarded the Newbery Medal, the highest honor given children’s literature, as well as the Locus Award for Best Young Adult Book and the Hugo Award for Best Novel. The awarding of the 2010 UK Carnegie Medal makes Gaiman the first author ever to win both the Newbery Medal and the Carnegie Medal with the same book. His most recent book, Fortunately, the Milk (“the funniest work of literature since Catcher in the Milk”) has been on bestseller lists since publication, and a recent reading and performance of the entire book sold out Central Hall in Westminster. His work has been adapted for film, television, and radio, including Stardust (2007), directed by Matthew Vaughan, and the animated feature film Coraline (2009), which secured a BAFTA nomination for Best Animated Film and was nominated for an Oscar in the same category. In March 2013, BBC Radio broadcast a new six-episode production of Neverwhere, with a star-studded cast that includes James McAvoy, David Harewood, Benedict Cumberbatch, and Romola Garai. Gaiman has written and directed for film and television, and his 2011 episode of Doctor Who, “The Doctor’s Wife,” caused The Times (London) to describe him as “a hero” and won the Hugo, Ray Bradbury, and SFX awards. Make Good Art, the text of a commencement speech Gaiman delivered at Philadelphia’s University of the Arts, was published in a volume designed by renowned artist Chip Kidd; his recent speech in support of libraries and reading will be published as a book in 2014. More than 1.8 million people follow him on Twitter. Born in Hampshire, he currently lives in Cambridge, Massachusetts, with his wife, the rock star Amanda Palmer, with whom he sometimes performs.

CAPTION INFO: Renowned writer Neil Gaiman appointed as Professor in the Arts in the Theater and Performance Program at Bard College.

Founded in 1860, Bard College in Annandale-on-Hudson, New York, is an independent, nonsectarian, residential, coeducational college offering a four-year B.A. program in the liberal arts and sciences and a five-year B.A./ B.S. degree in economics and finance. The Bard College Conservatory of Music offers a five-year program in which students pursue a dual degree—a B.Music and a B.A. in a field other than music—and offers an M.Music in vocal arts and in conducting. Bard also bestows an M.Music degree at Longy School of Music of Bard College in Cambridge, Massachusetts. Bard and its affiliated institutions also grant the following degrees: A.A. at Bard High School Early College, a public school with campuses in New York City (Manhattan and Queens) and Newark, New Jersey; A.A. and B.A. at Bard College at Simon’s Rock: The Early College, in Great Barrington, Massachusetts, and through the Bard Prison Initiative at six correctional institutions in New York State; M.A. in curatorial studies, M.S. in economic theory and policy, and M.S. in environmental policy and in climate science and policy at the Annandale campus; M.F.A. and M.A.T. at multiple campuses; M.B.A. in sustainability in New York City; and M.A., M.Phil., and Ph.D. in the decorative arts, design history, and material culture at the Bard Graduate Center in Manhattan. Internationally, Bard confers dual B.A. degrees at the Faculty of Liberal Arts and Sciences, St. Petersburg State University, Russia (Smolny College); American University of Central Asia in Kyrgyzstan; and Bard College Berlin: A Liberal Arts University; as well as dual B.A. and M.A.T. degrees at Al-Quds University in the West Bank.