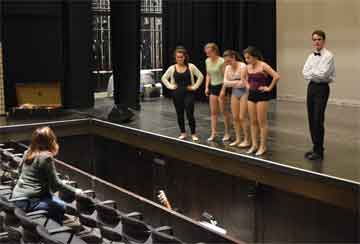 ANNANDALE-ON-HUDSON, N.Y.— The Richard B. Fisher Center for the Performing Arts at Bard College has launched a pilot program to provide new arts education opportunities for Red Hook students. Working in collaboration with the Red Hook Central School District, the Fisher Center is inviting students to participate in a range of performing arts activities, including attending open rehearsals, plays, concerts, and master classes, and staging performances by Red Hook students in theater, choral, and band programs in the Fisher Center’s theaters.

On November 13 and 14, Red Hook high school students were given the opportunity to bring their work to the Fisher Center’s LUMA Theater. The Red Hook Schools Performing Arts Club took to the stage for a public performance of the premiere of Rosary O’Neill’s Broadway or Bust, a musical about young artists in the fight for fame, with an original score composed and performed by David Temple, faculty member of the Bard College Conservatory of Music.

Featuring a cast of high school students, the show was directed by Deborah Temple who is head of the student Performing Arts Club. “While working in LUMA Theater at the Fisher Center we feel enveloped by an artistic environment making us free to make creative decisions as opposed to struggling to make a work of art effective in a high school gymnasium,” said Temple.

“This initiative fulfills an acute need of the school district and makes the Center available as a resource to the community,” says Bob Bursey, Senior Producer at the Fisher Center. “We welcome these student performers and look forward to continuing to collaborate with the Red Hook Central School District to create arts education opportunities.”

In the spring of 2014, the Red Hook Linden Avenue Middle School and High School choruses and bands will each perform a public concert in the Sosnoff Theater. The student musicians will also be invited to attend rehearsals of the Bard College Graduate Vocal Arts Program opera as well as The Bard College Conservatory of Music Orchestra concerts. Bard College teaching artists will conduct musicianship master classes to prepare students for taking the stage of the Sosnoff Theater, known as one of the world’s best small concert halls.

The Richard B. Fisher Center for the Performing Arts at Bard College offers an architecturally bold and dynamic environment for innovative artistic presentation in the Hudson Valley. Designed by Frank Gehry, the Fisher Center provides audiences with a world-class complex that inspires risk-taking performances and provocative programs in orchestral, chamber, and jazz music and theater, dance, and opera by American and international artists. The Center is also home to Bard College’s Theater & Performance Program and Dance Program. For more information about the Fisher Center go to fishercenter.bard.edu.