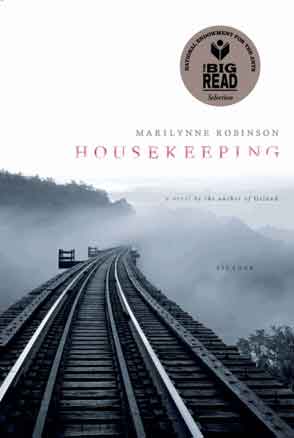 Literary events planned throughout the Hudson Valley from March 15 to May 2, 2014

ANNANDALE-ON-HUDSON, N.Y.— The Big Read comes to Dutchess, Columbia, and Ulster Counties through a unique partnership between Bard College and the Germantown, Kingston, Red Hook, Rhinecliff, and Tivoli libraries. Beginning in March 2014, The Big Read spans six weeks of activities, performances, and discussions exploring Pulitzer Prize-winning author, Marilyn Robinson’s Housekeeping. A program of the National Endowment for the Arts (NEA) managed by Arts Midwest, The Big Read’s mission is to create an enthusiastic community book discussion that spans ages, ethnicities, education, and geography through community events, performances, talks, and book groups. Starting in March 2014, events are planned throughout the Hudson Valley at businesses, libraries, schools, and homes. Book clubs are encouraged to participate. Activities will take place from March 15 to May 2, 2014. For more information go to
bard.edu/hannaharendtcenter/bigread/ or send an e-mail to bigread@bard.edu.

“Our ambitious community libraries make The Big Read partnership possible,” says Erin Cannan, Associate Director of Bard’s Center for Civic Engagement. “Spanning the Hudson River and town and village borders, this Big Read will represent the very best of the vast literary and artistic resources in the Hudson Valley.”

Housekeeping is the story of Ruth and her younger sister, Lucille, who grow up haphazardly, first under the care of their grandmother, then of two comically bumbling great-aunts, and finally of Sylvie, their eccentric and remote aunt. The family house is in the small Far West town of Fingerbone set on a glacial lake. It is a town “chastened by an outsized landscape and extravagant weather, and chastened again by an awareness that the whole of human history had occurred elsewhere.” Ruth and Lucille's struggle toward adulthood beautifully illuminates the price of loss and survival, and the dangerous and deep undertow of transience. Published in 1980, the book was nominated for the Pulitzer Prize for fiction.

Event highlights for the month of March include a screening and discussion of Bard College professor Kelley Reichardt’s award-winning film, Wendy and Lucy on Saturday, March 15, at 2 p.m., at Bard College’s Preston Film Center; a Young Adult Fiction Workshop with novelist and playwright Madeleine George on Saturday, March 15,
2– 4 p.m., at Red Hook Public Library; and a lecture by Bernard Rudberg, “History of the Railroads of the Hudson Valley,” on Thursday, March 20, at 6 p.m., at Red Hook’s Elmendorph Inn.

For more information on these and dozens of additional events, go to bard.edu/hannaharendtcenter/bigread/ or send an e-mail to bigread@bard.edu.

As one might imagine from reading her work, Marilynne Robinson is passionately tied to the dramatic northwest landscape of her childhood. She was born in Sandpoint, Idaho, where her family had lived for four generations: her grandparents were farmers and ranchers; her father was in the lumber industry. Robinson recalls hearing the whistles of passing trains, though “nothing ever seemed to stop” at the railroad junction in town. She spent many hours at the edge of Sandpoint's large, cold, beautiful lake. Robinson's two sets of grandparents lived at opposite ends of the bridge that crossed the lake, which claimed the life of her mother's brother in a sailing accident before Robinson was born. After graduating high school in nearby Coeur d’Alene, Robinson followed her brother to Brown University in Rhode Island, where she studied with the writer John Hawkes and nurtured her interest in nineteenth-century American literature and creative writing. She graduated in 1966, and from there went on to earn a PhD in English from the University of Washington in Seattle.

Once she completed her dissertation on Shakespeare, she was ready to begin work on Housekeeping, her first novel. She wrote much of it while teaching in France and, after that, in Massachusetts. She gave a draft of the novel to her friend and fellow writer John Clayton, who passed it on to an agent without her knowledge. “If he hadn't done that,” says Robinson, “I'm not at all sure that I would ever have submitted it for publication.” It was published in 1980 to widespread critical acclaim, winning the PEN/Hemingway Award for best first novel.

Since Housekeeping, Robinson has written many essays and book reviews in journals such as Harper’s, The Paris Review, and The New York Times Book Review. Robinson's second novel, Gilead, was published in 2004. It won the Pulitzer Prize and the National Book Critics Circle Award for fiction. Robinson has served as visiting professor and writer-in-residence at several colleges and universities in the U.S. and abroad. In 1991, she joined the faculty of the University of Iowa Writers' Workshop. She currently resides in Iowa, where she teaches and writes.

For more information go to bard.edu/hannaharendtcenter/bigread/ or send an e-mail to bigread@bard.edu.