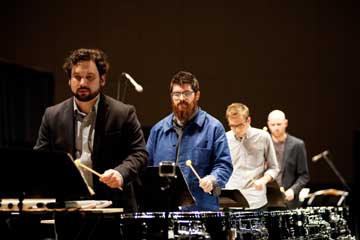 ANNANDALE-ON-HUDSON, N.Y.— The Bard College Conservatory of Music presents Conservatory Sundays: Sō Percussion and Bard Percussion with guest artist Blair McMillen. The ensembles perform works by Kyle Gann, Steve Reich, John Cage, Daníel Bjarnason, and Martin Bresnick on Sunday, April 6 at 3 p.m. in The Richard B. Fisher Center for the Performing Arts’s Sosnoff Theater. Tickets are $20 and $15, and can be ordered online at fishercenter.bard.edu or by calling the box office at 845-758-7900. All ticket sales benefit the Conservatory’s Scholarship Fund.

Founded in 2011, Bard Percussion is the student percussion group of The Bard College Conservatory of Music. This concert is the centerpiece of Sō Percussion’s im­mersive chamber music course at Bard. The members of Bard Percussion study chamber music extensively with Sō Percussion, appearing onstage together and with the members of Sō. They have opportunities to learn important 20th– and 21st–century works for percussion ensemble, as well as working with living composers to create new music.

For more than decade, program directors Sō Percussion have redefined the modern per­cussion ensemble as a flexible, omnivorous entity, pushing its voice to the forefront of American musical culture. Praised by the New Yorker for their “exhilarating blend of pre­cision and anarchy, rigor and bedlam,” their accomplishments now include 13 albums, tours throughout the United States and around the world, a dizzying array of collaborative projects, several ambitious educational programs, and a steady output of their own music.

Their music runs the gamut from percussion classics (Steve Reich, John Cage), to new commissions (David Lang, Steve Reich, Steve Mackey), to original music (group member Jason Treuting’s Amid the Noise). Sō Percussion has performed this music across the United States, with concerts at the Lincoln Center Festival, Carnegie Hall, Stanford Lively Arts, and many others. In addition, recent tours to Russia, Australia, Italy, Spain, Germany, and Ukraine have brought them international acclaim.

For tickets and additional information about these programs contact the Fisher Center box office at fishercenter@bard.edu, or call 845-758-7900.