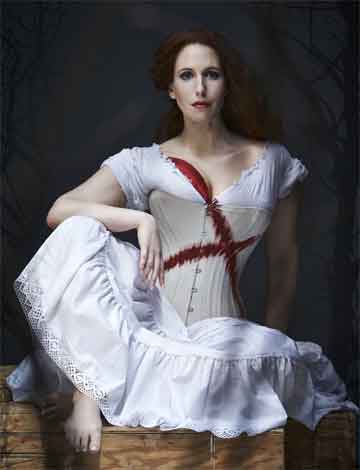 “An indispensable part of the summer operatic landscape.”
– Musical America on Bard SummerScape
ANNANDALE-ON-HUDSON, N.Y.—Reviving important but neglected operas is one of the ways the Bard SummerScape festival in New York’s Annandale-on-Hudson has established itself as “a hotbed of intellectual and aesthetic adventure” (New York Times), and this year’s immersion in “Schubert and His World” – culminating in the 25th-anniversary season of the Bard Music Festival – is no exception. To enrich its exploration of the roots of Austro-German Romanticism, Bard presents Euryanthe (1823) by Schubert’s contemporary Carl Maria von Weber, marking the opera’s first American revival in 100 years. Headlined by Ellie Dehn, “a charismatic soprano with great stage presence” (Wall Street Journal), Bard’s original staging is by Kevin Newbury, creator of SummerScape’s “gold standard production” (WQXR) of Richard Strauss’s Die Liebe der Danae. Euryanthe’s five performances (July 25, 27 & 30; August 1 & 3) feature the festival’s resident American Symphony Orchestra under the leadership of music director Leon Botstein, who also leads semi-staged performances of Schubert’s own seldom-heard opera Fierrabras starring Joseph Kaiser, best known for his leading role in Kenneth Branagh’s film adaptation of The Magic Flute, on August 17, and of a double-bill of rarities – Schubert’s one-act Singspiel Die Verschworenen and Franz von Suppé’s operetta Franz Schubert – on August 10. As the Financial Times concluded after last season’s first fully-staged American production of Sergei Taneyev’s Oresteia, “Some of the most important summer opera experiences in the U.S. are not at the better known festivals but at Bard SummerScape.”

Carl Maria von Weber (1786–1826) won his greatest success with Der Freischütz, the opera with which he established Germany’s own homegrown Romantic opera tradition, free from French and Italian influence and distinguished by novel orchestrations and supernatural elements. His next major contribution to the genre, Euryanthe, has not achieved the same fame. Yet the opera – a story of chivalry, betrayal, innocence, and love, again imbued with the supernatural – was no less ambitious or innovative. Euryanthe, unlike Der Freischütz, was through-composed, heralding a conclusive break with the spoken dialogue of Singspiel, and it was in Euryanthe that Weber first made extensive use of recurring musical motives, bringing cohesiveness to the score and anticipating the Wagnerian technique. Though hailed as “musically sublime” (The Guardian) and arguably “Weber’s greatest masterpiece” (NPR), Euryanthe remains largely neglected. Only its overture is performed with any regularity; revivals of the opera in its entirety are rare, not least in America, where it has not been seen since the Metropolitan Opera’s staging 100 years ago, in 1914.

Bard’s upcoming production therefore marks a major historical milestone. In the title role is Ellie Dehn, whose “melting yet clear soprano” impressed the New York Times when she portrayed Catherine of Aragon with “eloquence and power” in SummerScape’s presentation of Saint-Saëns’s Henry VIII two years ago; as Opera News acknowledged, “No one who heard the Queen’s final solo, ‘Je ne te reverrai jamais,’ sung with profound poignancy by Ellie Dehn at the Bard Music Festival 2012 could deny the masterly quality of the music.” Opposite her, as Euryanthe’s fiancé Adolar, is lyric tenor William Burden, who may be heard on the Metropolitan Opera’s 2013 Grammy Award-winning recording of The Tempest by Thomas Adès. Soprano Wendy Bryn Harmer, pronounced “spellbinding” in view of her “enormous range, fortitude, and bewitching command” (Opera News), sings Euryanthe’s ill-fated rival, Eglantine, with bass-baritone Ryan Kuster lending his “beautiful tone” (San Francisco Classical Voice) to the role of Lysiart. And playing King Ludwig is Peter Volpe, back at Bard after bringing his “robust voice and charismatic presence” (New York Times) to 2009’s staging of Meyerbeer’s Les Huguenots.

Irish Times Theatre Award-winner Kevin Newbury returns to direct, following his success with Richard Strauss’s Die Liebe der Danae at SummerScape three years ago; WQXR named the production one of the “Best of 2011,” and the New York Times observed: “An opera needs to be able to catch fire onstage, and in the SummerScape production, directed with imagination and emotional nuance by Kevin Newbury, Danae certainly does.” Euryanthe’s set design is by Victoria “Vita” Tzykun, whose stage credits include Los Angeles Opera, Dallas Opera, and the Kennedy Center, with costumes and lighting by Jessica Jahn and D.M. Wood, both members of the design team behind Die Liebe der Danae, in which “Jahn’s costumes were dead-on” (Opera News). The new production will run for five performances (July 25, 27 & 30; August 1 & 3), with an Opera Talk, free and open to the public, before the matinee on July 27.

Convinced that opera would bring the fame and fortune that eluded him, Franz Schubert (1797–1828) attempted more than a dozen works for the stage. Perhaps the finest of these is Fierrabras (1823), which was intended, like Euryanthe, for Vienna’s Kärntnertor Theater, and marks Schubert’s own attempt to compose grand Romantic opera in German. Although it was never staged during his lifetime, the opera – the story of a fictitious Saracen knight at the time of Charlemagne – has since found a following; at its 1988 Austrian premiere, the Frankfurter Allgemeine Zeitung declared that, “against the judgment of history,” Fierrabras was “triumphantly rescued” at last.

Another of Schubert’s works for the stage is Die Verschworenen (“The Conspirators,” 1823). With a libretto derived from Aristophanes’s satire Lysistrata, this one-act Singspiel is a sparkling, attractively scored comedy, and although its title initially led to prohibition at the hands of the censors, it enjoyed a brief spell of popularity in the 1860s. On August 10, Bard pairs a semi-staged performance of Die Verschworenen with the first American presentation of another long-forgotten Viennese favorite: Franz von Suppé’s one-act operetta Franz Schubert (1864), a hit in its day, which incorporates Schubert’s own melodies into a loosely biographical piece depicting – with considerable artistic license – the inspiration behind the songs of Die schöne Müllerin. With Leon Botstein leading members of the American Symphony Orchestra and James Bagwell directing the Bard Festival Chorale, the SummerScape performances boast a first-rate cast, with tenor Paul Appleby, “an intelligent young singer equipped with the elegance and expressivity of an old pro” (New York magazine); soprano Deanna Breiwick, who was heralded by the New York Times as a “vocal trapeze artist”; bass-baritone Ryan Speedo Green, recent recipient of a 2014 Richard Tucker Career Grant; mezzo-soprano Cecelia Hall, styled “a real find” (Dallas Morning News); and tenor Nicholas Phan, who, “with his sweet, clear voice, is on a career roll” (New York Times).

Since the opening of the Fisher Center at Bard, Botstein and the American Symphony Orchestra have been responsible for championing and restoring to the stage a growing number of important but long-neglected operas. All these presentations and their remarkable stagings have been warmly received by audiences and critics alike – not least, last season’s U.S. premiere of Taneyev’s Oresteia. A 2014 International Opera Award nominee, Bard’s production was pronounced “a revelation” by the Financial Times and “sensational” by Bloomberg News, while the New York Times admired the “handsome performance” Botstein drew from his ensemble, “capably marshaling the opera’s disparate styles and coordinating its sizable forces.”

Illustrating the scope and originality of the festival’s programming, a list of Bard’s previous operatic offerings follows below:


As Musical America observes: “Bard’s annual opera has become an indispensable part of the summer operatic landscape because the choice of works is invariably inspired and their productions distinctively creative.”


Special support for this program is provided by Emily H. Fisher and John Alexander.

Direction and design by Zane Pihlstrom


* Round-trip transportation from Manhattan to Bard is available for this performance. The round-trip fare is $20 and reservations are required; see further details below.


Members of the American Symphony Orchestra


* Round-trip transportation from Manhattan to Bard is available for certain performances on August 8, 10, 15, and 17. The round-trip fare is $20 and reservations are required; see further details below.

John Banville: Love in the Wars – A version of Heinrich von Kleist’s Penthesilea

“Schubert and the Long 19th Century”

Thursdays and Sundays July 3 to August 3 at 7pm

SummerScape opera, theater, and dance performances and most Bard Music Festival programs are held in the Sosnoff Theater or LUMA Theater in Bard’s Richard B. Fisher Center for the Performing Arts, designed by Frank Gehry and celebrated since its opening as a major architectural landmark in the region. Some chamber programs and other BMF events are in Olin Hall. The Spiegeltent has its own schedule of events, in addition to serving as a restaurant, café, and bar before and after performances. Film Series screenings are at the Jim Ottaway Jr. Film Center in the Milton and Sally Avery Arts Center.

To make a reservation on the round-trip SummerScape coach provided exclusively to ticket holders for specific performances indicated by * in the listings above, call the box office at 845-758-7900 or select this option when purchasing tickets. The round-trip fare is $20 and reservations are required. The coach departs from behind Lincoln Center, on Amsterdam Avenue between 64th and 65th Street. Bus departure time will be included on the ticket order receipt, or visit fishercenter.bard.edu/visit/transportation.


For tickets and further information on all SummerScape events, call the Fisher Center box office at 845-758-7900 or visit www.fishercenter.bard.edu. Fisher Center members receive priority access to the best seats in advance, and those who join the Center’s email list receive advance booking opportunities as well as regular news and updates.