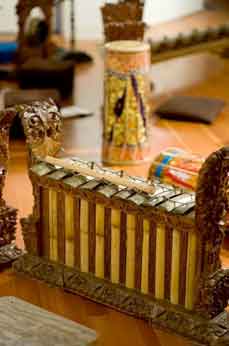 ANNANDALE-ON-HUDSON, N.Y.— Hudson Valley Balinese Gamelan Orchestras will host their annual spring concert on Friday May 9, at Bard College’s Olin Auditorium. The program, featuring Balinese music and dance, begins at 8 p.m. Seating is general admission with a suggested donation of $10; free for Bard students, staff, and faculty and children under the age of 16. Reservations are not necessary, but it is advised that you arrive in plenty of time to secure a seat. For more information call 845-688-7090.

Guest artists for this concert include Dr. Pete Steele from Massachusetts Institute of Technology, and Gamelan Dharmaswara, renowned Balinese dancer Shoko Yamamuro, and artistic director Professor Pak I. Nyoman Suadin, and a cast of over 40 students and community members.

A gamelan is often described as one instrument played by many people. It may include an ensemble of up to 40 musicians and dancers, or as few as four or five players.

Essentially, the word gamelan means to hammer or strike. Compositions for gamelan are built around rhythmic structures with layered melodic themes, and trademark interlocking sections.

Learning to play in a gamelan ensemble involves memorizing intricate musical compositions, taught by rout under the guidance of master instructors, composers—or if in Bali—elders from the village. Each gamelan, including the instruments and compositions, are regarded as possessing living spirits with their own name and home. Two basic groups of instruments comprise a gamelan gong kebyar ensemble: metallophones consisting of bronze or metal keys, resting on a wooden base, or suspended above resonators, struck with various wooden mallets; and gongs which either hang or rest in rows on a frame suspended by stretched cords. The biggest gongs are struck with padded mallets; the middle range with hammer-like mallets made of wood. Non-percussive instruments in the gamelan include sulings or flutes, and the stringed and bowed rebabs. Gamelan compositions may also include vocal accompaniments.

Complex and multi-layered textures of sound created by gamelan ensembles have attracted music enthusiasts for decades, inspiring such well-known composers as Claude Debussy, Benjamin Britten, Lou Harrison, Philip Glass and many notable others.