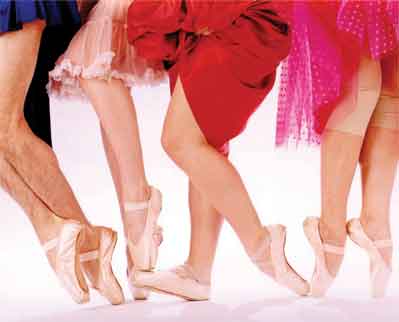 ANNANDALE-ON-HUDSON, N.Y.—The Richard B. Fisher Center for the Performing Arts at Bard College presents a special holiday performance of Nut/Cracked—The Bang Group’s beloved, witty response to The Nutcracker. Showcasing choreography by David Parker ’81 with music by Pyotr Ilyich Tchaikovsky, Nut/Cracked will be performed in the Sosnoff Theater of the Fisher Center on Saturday, December 20 at 7:30 p.m. and Sunday, December 21 at 2 p.m. Tickets are $25–45. Nut/Cracked is suitable for ages 12 and up. Tickets can be ordered online at fishercenter.bard.edu or by calling the box office at 845-758-7900.

Nut/Cracked takes its inspiration from all corners of the dance canon, from tap riffs to en pointe ballet, by way of bubble wrap, disco, and Chinese take-out noodles. In Nut/Cracked, choreographer Parker finds beauty in the ridiculous, waltzing us through many incarnations of Tchaikovsky’s score, including versions by Duke Ellington and Glenn Miller, as well as the traditional orchestral suite. The company turns the sugar-coated ballet into a piece of rhythmic dance theater. Expect tap dancing, singing and some unusual pointe shoe activity. Nothing is sacred as Nut/Cracked twists and melds various dance traditions into an ode to American eclecticism that honors the human urge to dance while riding Tchaikovsky’s voluptuous waves of rhythm.

“Bringing Nut/Cracked to Bard’s Fisher Center is especially stirring to me, not only because of the stunning theater and surroundings but because I was a student at Bard in the late ’70s,” says Parker. “Bard shaped my aesthetics and ethics and opened my imagination to adventure. In many ways, Nut/Cracked embodies that heady mix of brashness and rigor that so characterized my time there. I’m elated to be returning to Bard with such a celebratory piece.”

The mission of the Bang Group (TBG), based on choreographer David Parker’s devotion to rhythmic form and its theatrical potential, is to facilitate the creation and performance of Parker’s dances. TBG has toured 13 countries and 23 states, and many of its works have achieved international acclaim including Parker’s notorious velcro duet; Slapstuck (2002 Bessie Award for Design); Nut/Cracked, which has been touring for the past 10 seasons; and ShowDown, a danced version of Annie Get Your Gun.  TBG has been presented in 10 seasons by Dance Theater Workshop and New York Live Arts, Danspace Project and several by DanceNow/NYC and Symphony Space. The company has received support from NYFA (Build Grant), Doris Duke Foundation, Jerome Robbins Foundation, Frederick Loewe Foundation, Greenwall Foundation, Arts International, Pentacle’s ARC Grant, Netherland-America Foundation, Mid Atlantic Arts Fund, NYC Department of Cultural Affairs, 2wice Foundation, and individuals. TBG is the dance company in residence at NYC’s West End Theater, where it presents a thrice-yearly choreographic series called Soaking W.E.T.

The Bang Group, a rhythm-based, theatrical dance company based in New York City, incorporated as a nonprofit in 1995. Through The Bang Group’s 13 year relationship with Summer Stages Dance in Concord, Massachusetts, it also enjoys a sustained presence in Boston through performances on First Night Boston, at The Out On The Edge Festival at the Boston Center for the Arts, and through extensive teaching and mentoring of Boston area dancers and choreographers.

Other choreographic awards include a New York Dance and Performance (Bessie) Award for Design, Finalist Prize from the IV International Competition for Choreographers of Contemporary Dance, Special Citation from the Kurt Jooss Awards Jury, Emerging Choreographer of Distinction from the Nijinsky Awards Jury in Monte Carlo, Philanthropy Award from Dancers Responding to AIDS, MOVE Award from Dance Theater Workshop, Art + Action Award from Gibney Dance Center, “Best of Fringe” citation from Edinburgh Fringe Festival, and several “Ten Best of the Year” citations from newspapers and journals in Boston, Antwerp, London, Pittsburgh, Milwaukee, Montreal, and Cleveland. Parker teaches dance composition at The Juilliard School, Barnard College, The Alvin Ailey School and Hunter College. He has also been visiting professor of dance composition at Princeton University and SUNY Purchase. He regularly writes about dance for Dance Magazine, The Brooklyn Rail, and several blogs.