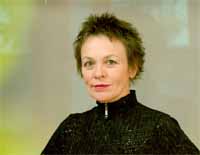 “Anderson continues to imbue her work with a singular perspective that is both haunting and timeless.” —The New Yorker
ANNANDALE-ON-HUDSON, N.Y.— Join author Neil Gaiman for a dialogue with legendary musician and composer Laurie Anderson in this third edition of an ongoing series of public conversations at the Fisher Center hosted by Professor Gaiman. The discussion will center on the topics of “Story Structure” and “Fiction vs. Autobiography.” Presented by Live Arts Bard, the program takes place on Friday, April 3 at 7:30 p.m. in the Sosnoff Theater of The Richard B. Fisher Center for the Performing Arts at Bard College. Tickets are $25, $5 for the Bard community, and can be ordered online at fishercenter.bard.edu or by calling the box office at 845-758-7900.

“We are pleased to present Neil’s next creative conversation—the first in the series with a performing artist—with pathbreaking legend Laurie Anderson,” says Bob Bursey, senior producer at the Fisher Center. “Neil has drawn incredible insights, humor, and inspirations from his past guests, artist/illustrator Art Spiegelman and author Audrey Niffenegger.”

Laurie Anderson is one of America’s most renowned—and daring—creative pioneers. She is best known for her multimedia presentations and innovative use of technology. As writer, director, visual artist, and vocalist, she has created groundbreaking works that span the worlds of art, theater, and experimental music.

Her recording career, launched by “O Superman” in 1981, includes the soundtrack to her feature film Home of the Brave and Life on a String (2001). Anderson’s live shows range from simple spoken word to elaborate multimedia stage performances such as Songs and Stories for Moby Dick (1999). Anderson has published seven books and her visual work has been presented in major museums around the world.

In 2002, Anderson was appointed the first artist-in-residence of NASA, which culminated in her 2004 touring solo performance The End of the Moon. Recent projects include a series of audio-visual installations and a high definition film, Hidden Inside Mountains, created for World Expo 2005 in Aichi, Japan. In 2007 she received the prestigious Dorothy and Lillian Gish Prize for her outstanding contribution to the arts. In 2008 she completed a two-year worldwide tour of her performance piece, Homeland, released as an album on Nonesuch Records in 2010. Anderson’s solo performance Delusion debuted at the Vancouver Cultural Olympiad in February 2010, in 2010 a retrospective of her visual and installation work opened in Sao Paulo, Brazil, and later traveled to Rio de Janiero.

In 2011 her exhibition of all new work, titled Forty-Nine Days in the Bardo opened at the Fabric Workshop and Museum in Philadelphia. That same year she was awarded with the Pratt Institute’s Honorary Legends Award. Her exhibition Boat, curated by Vito Schnabel, opened in May of 2012. She has just finished residencies at CAP at UCLA and EMPAC in Troy New York. Anderson lives in New York City. www.laurieanderson.com/

Neil Gaiman, professor in the arts at Bard, is a New York Times best-selling author of novels, poetry, short stories, graphic novels, comics, journalism, and screenplays, who is listed in the Dictionary of Literary Biography as one of the top 10 living postmodern writers. Works include The Ocean at the End of the Lane, Neverwhere, Stardust, Anansi Boys, Good Omens (with Terry Pratchett), the award-winning Sandman series of graphic novels, and the short story collections Smoke and Mirrors and Fragile Things. Novels for younger readers include Fortunately, the Milk; Coraline, also an Academy Award–nominated film; and The Graveyard Book, winner of the Newbery (U.S.) and Carnegie (U.K.) Medals. He has written and directed for film and television, including a 2011 episode of Doctor Who that won the Ray Bradbury Award for Outstanding Dramatic Presentation and the 2012 Hugo Award for Best Dramatic Presentation, Short Form. Make Good Art, the text of a commencement speech he delivered at Philadelphia’s University of the Arts, was published in a volume designed by graphic artist Chip Kidd. www.neilgaiman.com

Live Arts Bard (LAB), the Fisher Center’s residency and commissioning program, is a laboratory for professional artists in theater, dance, and performance to test ideas and develop new projects, many of which premiere at the Fisher Center. Each year, LAB invites a number of artists and ensembles from the United States and abroad to be in residence on Bard’s campus.

Each summer the Fisher Center presents the Bard SummerScape festival, eight weeks of performing arts programs reflecting the life and times of the featured composer of the esteemed Bard Music Festival, now celebrating its 25th year. Fall and spring seasons include original productions, special one-night-only concerts, and touring artists from around the globe.