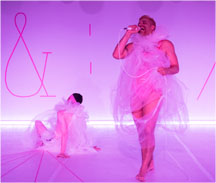 ANNANDALE-ON-HUDSON, N.Y.— Performer and choreographer Miguel Gutierrez, “one of our most provocative and necessary artistic voices” (Dance Magazine), meets middle age head-on in this wild and ebullient triptych that celebrates queerness, art making, and mortality. Age & Beauty will be performed in locations at the Fisher Center at Bard College from Thursday, September 10 through Sunday, September 13. Tickets are $25 ($10 for students) for individual performances and $45 ($20 for students) for marathon performances of the complete trilogy. For tickets and program information go to fishercenter.bard.edu or call the box office at 845-758-7900.

After developing and previewing part two of the Age & Beauty series with Live Arts Bard (LAB) in 2014, Gutierrez returns to premiere the third and final installment of the trilogy and to present the complete series for the first time in two marathon performances.  These performances cap a three-week production residency at Bard, during which Gutierrez and company finished the creation of Age & Beauty Part 3 and prepared the full trilogy for performance, prior to taking the project on tour nationwide.

“Gutierrez knows how to push a work to higher plane… he made his material sing, transmuting it into emotional expression.” (The New York Times on Age & Beauty Part 1 at the 2014 Whitney Biennial).

All performances are suitable for ages 17 and up.

The 44-year-old Gutierrez partners with 25-year-old performer Mickey Mahar in a fierce duet where queer theory and club dance collide; originally commissioned for the 2014 Whitney Biennial. Age & Beauty Part 1 was created by Miguel Gutierrez in collaboration with Mickey Mahar.

Age & Beauty Part 2: Asian Beauty @ the Werq Meeting or The Choreographer & Her Muse or &:@&

Gutierrez explores his relationships with longtime collaborators in this touching meditation on the challenges of aging, artistic relationships, and administration.

Age & Beauty Part 2 was created by Miguel Gutierrez and will be performed by Gutierrez, Michelle Boulé, Ben Pryor, and Sean Donovan.

Age & Beauty Part 3: DANCER or You can make whatever the f*ck you want but you’ll only tour solos or The Powerful People or We are strong/We are powerful/We are beautiful/We are divine or &:’///

As Gutierrez imagines his work having a life beyond him, he assembles his utopian ideal of a dance company for the end of the world. Part three envisions a new future of simultaneous lamentation, aspiration, melancholy, fantasy, and doubt. Age & Beauty Part 3 was created by Miguel Gutierrez and will be performed by Gutierrez, Ezra Azrieli Holzman, Ishmael Houston-Jones, Alex Rodabaugh, and Jennifer Rosenblit.

Experience all three works performed together as a complete trilogy for the first time.

Miguel Gutierrez lives in Brooklyn and makes performances. He has been called “one of our most provocative and necessary artistic voices” by Eva Yaa Asantewaa at Dance Magazine. His work engages persistent philosophical questions about the search for meaning and joins a legacy of process-focused experimental dance while drawing on influences such as endurance-based performance art, noise music, ecstatic experience in social and religious rituals, the study of mind-body somatic systems, and various histories of spectacle including Broadway and queer club performance.

His work has been presented by venues such as the Brooklyn Academy of Music, Festival D’Automne, Centre Pompidou, ImPulsTanz, and Walker Art Center. He has received fellowships from the Guggenheim Foundation, Foundation for Contemporary Art, United States Artists, Lambent Foundation, and New York Foundation for the Arts. He has created one-off pieces for a host of venues, such as a collaboration with Jenny Holzer for the Boston ICA, an evening of performance interventions that were part of the Regarding Warhol exhibit at the Metropolitan Museum of Art, an hour-long performance for Courtesy the Artist’s residency at Recess Gallery during Performa 2013, and a performance response to the Re-defining Actionism show at MUMOK in Vienna in partnership with ImPulsTanz.

He has choreographed and performed in music videos for Diane Cluck, Holcombe Waller, and Le Tigre, performed as a singer with Antony and the Johnsons, Nick Hallett, My Robot Friend, Justin Vivian Bond, and Holcombe Waller, created original music for several of his stage works, and released a self-produced EP under the moniker The Belleville. He leads workshops all over the world in his approach to creative practice. His book WHEN YOU RISE UP is available from 53rd State Press and he writes a blog at Stargayze.com. He is a guild certified practitioner of the Feldenkrais Method. miguelgutierrez.org

About The Richard B. Fisher Center for the Performing Arts at Bard College

The Fisher Center for the Performing Arts, an environment for world-class artistic presentation in the Hudson Valley, was designed by Frank Gehry and opened in 2003. Risk-taking performances and provocative programs take place in the 800-seat Sosnoff Theater, a proscenium-arch space, and in the 220-seat LUMA Theater, which features a flexible seating configuration. The Center is home to Bard College’s Theater & Performance and Dance Programs, and host to two annual summer festivals: SummerScape, which offers opera, dance, theater, operetta, film, and cabaret; and the Bard Music Festival, which celebrated its 25th year in 2014. The 2015 festival was devoted to Carlos Chávez and the music of Mexico and the rest of Latin America. The

Center bears the name of the late Richard B. Fisher, former chair of Bard College’s  Board of Trustees. This magnificent building is a tribute to his vision and leadership. The outstanding arts events that take place here would not be possible without the contributions made by the Friends of the Fisher Center. We are grateful for their support and welcome all donations.

Founded in 1860, Bard College in Annandale-on-Hudson, New York, is an independent, nonsectarian, residential, coeducational college offering a four-year B.A. program in the liberal arts and sciences and a five-year B.A./B.S. degree in economics and finance. The Bard College Conservatory of Music offers a five-year program in which students pursue a dual degree—a B.Music and a B.A. in a field other than music—and offers an M.Music in vocal arts and in conducting. Bard also bestows an M.Music degree at Longy School of Music of Bard College in Cambridge, Massachusetts. Bard and its affiliated institutions also grant the following degrees: A.A. at Bard High School Early College, a public school with campuses in New York City, Cleveland, and Newark, New Jersey; A.A. and B.A. at Bard College at Simon’s Rock: The Early College, in Great Barrington, Massachusetts, and through the Bard Prison Initiative at six correctional institutions in

New York State; M.A. in curatorial studies, M.S. in economic theory and policy, and M.S. in environmental policy and in climate science and policy at the Annandale campus; M.F.A. and M.A.T. at multiple campuses; M.B.A. in sustainability in New York City; and M.A., M.Phil., and Ph.D. in the decorative arts, design history, and material culture at the Bard Graduate Center in Manhattan. Internationally, Bard confers dual B.A. degrees at the Faculty of Liberal Arts and Sciences, St. Petersburg State University, Russia (Smolny College); American University of Central Asia in Kyrgyzstan; and Bard College Berlin: A Liberal Arts University; as well as dual B.A. and M.A.T. degrees at Al-Quds University in the West Bank. Bard offers nearly 50 academic programs in four divisions. Total enrollment for Bard College and its affiliates is approximately 5,000 students. The undergraduate College has an enrollment of more than 1,900 and a student-to-faculty ratio of 10:1. For more information about Bard College, visit www.bard.edu.

Live Arts Bard (LAB) is the interdisciplinary residency and commissioning program of The Richard B. Fisher Center for the Performing Arts at Bard College. LAB creates a community of professional artists and students who develop work side by side, inspiring one another to create and experiment. LAB provides studio and stage time, research resources and dramaturgy, production support, and essential funding to a wide range of professional artists and ensembles.