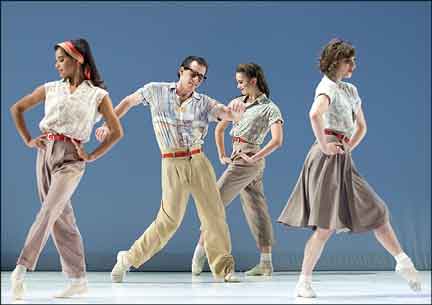 Featuring a World Premiere by Mark Morris, Paul Taylor’s Classic Company B, and Alexei Ratmansky’s Piano Concerto # 1
“American Ballet Theatre is a great and grand international ensemble, one of the greatest and grandest ballet companies in the whole wide world.”  —The New York Times

ANNANDALE-ON-HUDSON, N.Y. – The Richard B. Fisher Center for the Performing Arts presents American Ballet Theatre in it’s third appearance at Bard College on Friday, October 9 at 8 p.m.; Saturday, October 10 at 2 and 8 p.m.; and Sunday, October 11 at 2 p.m. The October weekend program features Alexei Ratmansky’s Piano Concerto #1, Paul Taylor’s Company B, and a world premiere by Mark Morris, performed in the Fisher Center’s stunning Sosnoff Theater. Tickets are $25–65, and may be purchased by calling the Fisher Center box office at 845-758-7900, or visiting the website at www.fishercenter.bard.edu.

One of the most acclaimed American choreographers, Mark Morris offers a world premiere of his third ABT commission accompanied by a live performance of Johann Nepomuk Hummel’s chamber work, Septet in C,
op. 114, “The Military,” with all-new costumes by Isaac Mizrahi, and lighting design by Michael Chybowski. Morris’ choreography was last seen at the Fisher Center in SummerScape 2008’s Romeo & Juliet, on Motifs of Shakespeare and in 2006 with Morris’ holiday classic The Hard Nut.

Ratmansky’s Piano Concerto # 1 is a brilliant, quicksilver romp that dashes by with spinning leaps, gravity-defying jumps, and whip-fast turns at an almost comically impossible speed, but its heart is a dreamy, moving double pas de deux. The dance will be accompanied by a live performance of Dmitri Shostakovich’s Concerto No. 1 for Piano, Trumpet, and Strings, Op. 35, with scenic design by George Tsypin, lighting by Jennifer Tipton, and costumes by Keso Dekker. Formerly Artistic Director of the Bolshoi Ballet, Ratmansky is an Artist in Residence at ABT. Performances of Piano Concerto #1 on Friday and Saturday evenings will be led by Gillian Murphy, Cory Stearns, Daniil Simkin and Maria Kochetkova in her American Ballet Theatre debut in the role. Saturday and Sunday matinee performances of the piece will be led by Christine Shevchenko, Calvin Royal III, Skylar Brandt, and Gabe Stone Shayer.

In the shadow of the Second World War, Paul Taylor’s modern classic Company B brings 1940s American life center stage as young lovers Lindy, jitterbug, and polka to the ebullient songs of the Andrews Sisters, including “Boogie Woogie Bugle Boy,” “Tico-Tico,” and “Bei Mir Bist Du Schön.” Company B received its American Ballet Theatre Company premiere at Bard College, on October 17, 2008. Staged by Cathy McCann Buck, the dance features costumes by Santo Loquasto, with lighting by Jennifer Tipton, recreated by Brad Fields. Paul Taylor is widely considered to be one of the most influential American choreographers of the 20th century.

“Once in a not-too-frequent while . . . there comes along an evening that reminds you … why you’re in the theater in the first place, and why dance is not a luxury or a frill but a necessity of life. Such an evening was American Ballet Theatre.”
—The Washington Post

ABT’s performances at the Fisher Center have been underwritten by the Martin and Toni Sosnoff Foundation.

American Ballet Theatre is recognized as one of the great dance companies in the world. Few ballet companies equal ABT for its combination of size, scope, and outreach. Recognized as a living national treasure since its founding in 1940, ABT annually tours the United States, performing for more than 450,000 people, and is the only major cultural institution to do so. It has also made more than 30 international tours to 42 countries as perhaps the most representative American ballet company and has been sponsored by the United States State Department on many of these engagements.

When American Ballet Theatre was launched in 1939, the aim was to develop a repertoire of the best ballets from the past and to encourage the creation of new works by gifted young choreographers, wherever they might be found. Under the direction of Lucia Chase and Oliver Smith from 1945 to 1980, the Company more than fulfilled that aim. The repertoire, perhaps unmatched in the history of ballet, includes all of the great full-length ballets of the 19th century, such as Swan Lake, The Sleeping Beauty and Giselle, the finest works from the early part of the 20th century, such as Apollo, Les Sylphides, Jardin aux Lilas and Rodeo, and acclaimed contemporary masterpieces such as Airs, Push Comes to Shove and Duets. In acquiring such an extraordinary repertoire, ABT has commissioned works by all of the great choreographic geniuses of the 20th century: George Balanchine, Antony Tudor, Jerome Robbins, Agnes de Mille and Twyla Tharp, among others.

In 1980, Mikhail Baryshnikov became Artistic Director of American Ballet Theatre, succeeding Lucia Chase and Oliver Smith. Under his leadership, numerous classical ballets were staged, restaged, and refurbished, and the Company experienced a strengthening and refining of the classical tradition. In 1990, Jane Hermann and Oliver Smith succeeded Baryshnikov and immediately established an agenda that was dedicated to maintaining the great traditions of the past while aggressively pursuing a vital and innovative future.

In October 1992, former American Ballet Theatre Principal Dancer Kevin McKenzie was appointed Artistic Director. McKenzie, steadfast in his vision of ABT as “American,” is committed to maintaining the Company’s vast repertoire and to bringing the art of dance theater to the great stages of the world.

Over its 75-year history, the Company has appeared in a total of 136 cities in 43 countries. ABT has appeared in all 50 of the United States. In keeping with the Company’s long-standing commitment to bring the finest in dance to the widest international audience, ABT has recently enjoyed triumphant successes with engagement in Hong Kong, Havana, Moscow, and Beijing.

The 2015 fall season is made possible in part through the generous support of Jeanne Donovan Fisher, the Martin and Toni Sosnoff Foundation, the Board of The Richard B. Fisher Center for the Performing Arts at Bard College, and the Friends of the Fisher Center, as well as grants from The Andrew W. Mellon Foundation, the National Endowment for the Arts, and the New York State Council on the Arts with the support of Governor Andrew Cuomo and the New York State Legislature.