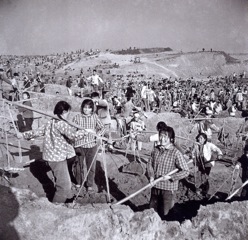 Exhibition Features Photography of Tang Desheng Curated by Patricia Karetzky, April 1–18
ANNANDALE-ON-HUDSON, N.Y.—The Bard Art History Program, Asian Studies Program, Hannah Arendt Center, and Human Rights Program are sponsoring an exhibition, “Photographs of Educated Youth: Images of the Chinese Youth Sent to the Countryside during the Cultural Revolution 1966–1976,” curated by Patricia Karetzky, who holds the Oskar Munsterberg Chair of Asian Art. The show comprises 25 photographs of the Cultural Revolution in China from the perspective of the young people sent to the countryside. The photographer, Tang Desheng, who was a youth during that time, embedded himself in the movement and traveled throughout China for 10 years documenting the lives of displaced youth.

About Tang Desheng’s “Educated Youth”
During the Cultural Revolution (1966–76), Tang Desheng had an opportunity to photograph the students who were sent from the cities to the rural countryside. For this he was well prepared. His family owned a photo shop in the small city of Changzhou, Jiangsu for several generations. Tang had also been in the army taking photographs for the government. At the onset of the Cultural Revolution, Tang left his home to travel with young people from the city who were sent to the countryside. As a young professional photographer, he pursued his good instincts and found a chance to record history. Tang followed the educated youth traveling to Sichuan, Shanghai, Nanjing, Hainan, Shandong, Yunan, Heilongjiang, among other places. He recorded the events in their life from the momentous to the routine, and his photos recreate a visual history of those days.

The vast majority of the photos are black and white taken with a Rollei Reflex twin lens camera Tang’s older sister gave him. Tang’s work is invaluable because cameras were very expensive and people were not allowed to use them freely. In contrast to the staged images contracted by state agencies, some of these are spontaneous pictures. Part of the complexity of this project is its depiction of a positive aspect of the students’ lives, despite their extreme hardships in the countryside. A book published in conjunction with the exhibition is available with an essay by Patricia Karetzky that presents the body of Tang’s work from this period organized according to the themes of: work, science and technology, education, entertainment, and indoctrination.

DOWNLOAD a high-resolution photo at bard.edu/news/pressphotos/.
CAPTION INFO: “Photographs of Educated Youth: Images of the Chinese Youth Sent to the Countryside during the Cultural Revolution 1966–1976,” curated by Patricia Karetzky, Oskar Munsterberg Lecturer in Art History, is on view at Bard College’s Bertelsmann Campus Center from April 1 to 18.