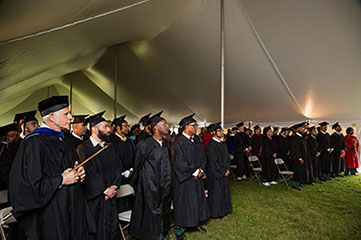 ANNANDALE-ON-HUDSON, N.Y.—The Bard Prison Initiative (BPI) celebrated its 14th commencement at Woodbourne Correctional Facility, a medium-security prison for men in Woodbourne, New York, on Saturday, June 11. BPI awarded associate in arts degrees to 30 students. This year’s BPI commencement speaker was Congressman Hakeem Jeffries, who represents the Eighth Congressional District of New York. Bard College President Leon Botstein gave the charge to the graduates, and Rabbi Andy Bachman, director of Jewish content and community ritual at Manhattan’s 92nd Street Y, delivered the invocation and benediction. Another BPI graduate, who had been released from prison in October, received his bachelor of arts degree during Bard College’s 156th commencement held in May on Bard’s Annandale-on-Hudson campus.

“All graduates of the Bard Prison Initiative—both past and present—should be commended for completing this rigorous program,” said Jeffries. “BPI is a critical component of the nationwide effort to reduce recidivism and enact comprehensive criminal justice reform across America. President Botstein and all involved in this valiant effort should be commended for their leadership.”

Since 2001, the Bard Prison Initiative has provided college opportunity inside the prisons of New York State. Begun as a pilot program with 15 students, BPI now enrolls 300 men and women inside three maximum-security prisons—Coxsackie, Eastern New York, and Green Haven—and three medium-security prisons—Fishkill, Taconic, and Woodbourne. In partnership with the New York State Department of Corrections and Community Supervision, Bard’s academic presence within the prison system has increased dramatically in breadth, depth, and scale: by the end of this year, the College will have awarded more than 400 degrees to students enrolled through the Initiative.

Bard College is also home to the Consortium for the Liberal Arts in Prison, which assists other colleges and universities as they establish similar projects in states across the country. The Consortium currently collaborates with colleges that are working to return rigorous college opportunity to the prison systems of their home states in Connecticut, Illinois, Indiana, Iowa, Kentucky, Maryland, Massachusetts, Minnesota, Missouri, Pennsylvania, Washington, and Wisconsin.

The pursuit of a college education dramatically reduces the rates at which students return to prison after release and spreads the benefits of academic achievement in many of the country’s most isolated communities. It affects all of those whose fates intersect in our prison system, including teachers, volunteers, administrators, and incarcerated students, along with their children and extended families. The work can be transformative, and offers the prospect of change that will reverberate through future generations.

The Bard Prison Initiative challenges and expands our sense of community, and its success is a tribute to an extraordinary collaboration among the College, students, and government of the State of New York. For more information, visit: bpi.bard.edu/.

Bard College is a four-year residential college of the liberal arts and sciences with a 155-year history of academic excellence. With the addition of the Montgomery Place estate, Bard’s campus consists of nearly 1,000 park-like acres in the Hudson River Valley. The College offers bachelor of arts degrees, with nearly 50 academic programs in four divisions—Arts; Languages and Literature; Science, Mathematics, and Computing; and Social Studies—and Interdivisional Programs and Concentrations. Bard also bestows several dual degrees, including a B.A./B.S. in economics and finance, and at the Bard College Conservatory of Music, where students earn a bachelor’s degree in music and a B.A. in another field in the liberal arts or sciences. Bard’s distinguished faculty includes winners of MacArthur Fellowships, National Science Foundation grants, Guggenheim Fellowships, Grammy Awards, French Legion of Honor awards, and Pulitzer Prizes, among others.

Over the past 35 years, Bard has broadened its scope beyond undergraduate academics. The College operates 12 graduate programs and has expanded to encompass a network of regional, national, and global partnerships—including dual-degree programs in four international locations; the Bard Prison Initiative, which grants college degrees to New York State inmates; and Bard High School Early Colleges, where students earn a high school diploma and an A.A. degree in four years. Bard’s philosophy sets a standard for both scholarly achievement and engagement in civic and global affairs on campus, while also taking the College’s mission to the wider world. The undergraduate college in Annandale-on-Hudson, New York, has an enrollment of more than 1,900 and a student-to-faculty ratio of 10:1. For more information about Bard College, visit bard.edu.
###