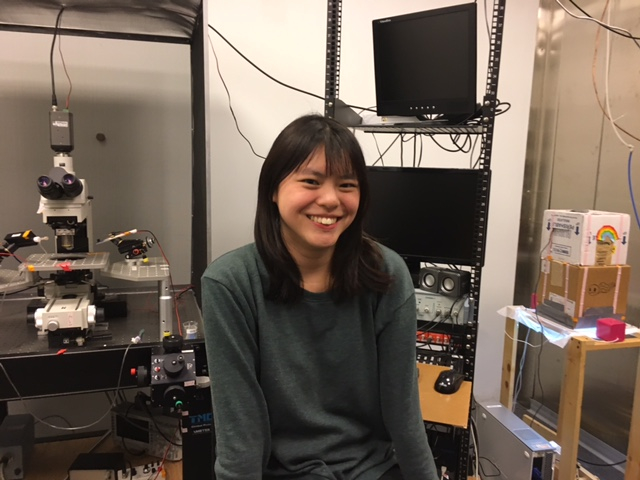 ANNANDALE-ON-HUDSON, N.Y.—Bard College senior and biology major Molly McQuillan ’17 and Bard assistant professor of biology Arseny Khakhalin, who is McQuillan’s senior project advisor, coauthored on a neuroscience paper published in the prestigious life sciences journal eLife.  “A cellular mechanism for inverse effectiveness in multisensory integration” presents new research that explains how the developing brain learns to integrate and react to subtle but simultaneous sensory cues—sound, touch and visual—that would be ignored individually. The study was led by Dr. Carlos Aizenman of Brown University.

Every moment of our lives we use different senses, such as vision, hearing, or touch, to build a fuller, more useful picture of the world around us. But how does the brain make sense of these flows of information? What happens in our neurons (brain cells) when they try to combine signals coming from, say, our eyes with those coming from our ears? To learn more about this question, a joint team of scientists from Brown University and Bard College chose the simplest possible behavior that would rely on two senses at once: a startle response to a soft sudden sound combined with a weak flash of light. They also chose one of the tiniest and simplest animals that can be startled by a combination of sound and light: the tadpole of the African Clawed frog. They used a flash of light so dim and a sound so quiet that neither of them alone would make the tadpole change the way it swam; yet when combined together, these two stimuli startled the tadpole, making it change its swimming direction in response. These behavioral experiments, independently run in the lab of Aizenman at Brown and by McQuillan at Bard, showed that multisensory stimuli in tadpoles lead to stronger behavioral responses only when the stimuli are weak. Until now, it was not known why and how this response, called the “inverse effectiveness of multisensory integration,” appears in the brain.

The team of scientists suspected that the integration of weak stimuli might be due to the activation of a specific information processing system in the brain: one that relies on signaling proteins called NMDA receptors. The Brown University group, led by study lead author Torrey Truszkowski, connected to individual cells in the tadpole brain and recorded their activity. They found that blocking NMDA receptors with a toxin was the only thing that disrupted the “inverse effectiveness of multisensory integration” in individual cells. At Bard, McQuillan found that adding a small amount of this same toxin to tadpole water made “inverse effectiveness” disappear from tadpole behavior. The tadpoles were no longer able to combine information from soft sounds and dim lights to form a stronger response. This study demonstrates for the first time, in any animal, that NMDA receptors in the brain have been shown to combine information from different senses.

Molly McQuillan is an alumna of Bard High School Early College Manhattan. For her senior project, McQuillan built a state-of-the-art experimental setup to study tadpole behavior, which includes a high-resolution LED projector, modified computer speakers, and a self-made infrared HD camera. It is this unique setup that made her contribution to the cutting edge research in multisensory integration possible. McQuillan is passionate about neuroscience and plans to continue her academic career in this field.

This research was sponsored by grants and scholarships from The National Science Foundation, National Institutes of Health, the American Physiological Society, Brown University, and Bard Summer Research Institute (BSRI).