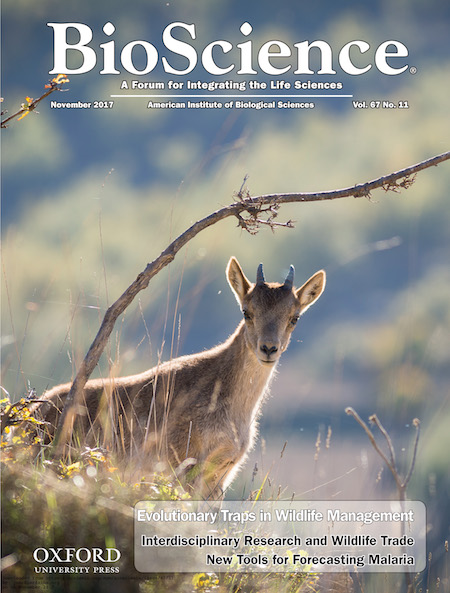 “Trojan Females and Judas Goats: Evolutionary Traps as Tools in Wildlife Management” Outlines Framework for Using Evolutionary Traps to Manage Pest Species
ANNANDALE-ON-HUDSON, N.Y.—Evolutionary traps occur when rapid environmental change causes animals to prefer poor-quality resources, habitats, or behaviors, over higher-quality ones that lead to greater survival or reproductive success. An example of an evolutionary trap is when aquatic insects are tricked by reflected polarized light from windows, solar panels, and asphalt roads into laying their eggs on artificial surfaces where they will perish. Conservation research has increasingly focused on understanding and mitigating the impact of these traps. At the same time, conservation scientists and practitioners have been working for centuries to control and eradicate populations of nonnative species where they become overabundant or otherwise act as pests, creating threats to crops and native species. Despite the development of a wide diversity of tools, such as sterilization, biocontrol, hunting, pheromone trapping, etc., those efforts have met with uneven success.

In a study published today in the journal BioScience, Bard College biology professors Bruce A. Robertson and Felicia Keesing, and Cary Institute of Ecosystem Studies ecologist Richard S. Ostfeld find that in the same way that evolutionary traps are a threat to native wildlife whose populations conservationists hope to stabilize, they also have the potential to be employed as highly effective tools in the management of species whose numbers need to be controlled or reduced. Their study, “Trojan Females and Judas Goats: Evolutionary Traps as Tools in Wildlife Management,” brings together the science from the pest-control, eco-evolutionary, and conservation communities to create a conceptual framework by which evolutionary traps can be repurposed as tools of deception to eliminate or control target pest species.

“A lot of attention has been focused on how humans can avoid creating these kinds of traps, because they’re bad for animals we care about,” says Keesing, David and Rosalie Rose Distinguished Professor of Science, Mathematics, and Computing at Bard. “We turned this concept around and asked how humans could deliberately create ecological traps to get rid of animals we don’t want, like invasive species or pests.”

In their study, Robertson, Keesing, and Ostfeld drew on historical examples of conservation actions to show how traps have been successfully designed using the careful selection of appropriate cues to manipulate behavioral mechanisms and traits that will most rapidly lead to reductions in target pest numbers, and how to strategically deploy traps without allowing populations to escape via learning or rapid evolution. The paper highlights case studies of target species control—such as the successful eradication of more than 230,000 feral goats from Pinta, Isabela, and Santiago Islands, Galápagos, in the early 2000s—that have successfully employed traps as tools and those that would have benefitted from more explicit use of the framework the authors highlight.

“Our framework outlines a diversity of techniques by which the sensory and nervous systems of animals can be manipulated in ways that not only make dangerous resources and situations attractive but in ways that should be better at only attracting the target species,” says Robertson, assistant professor of biology and director, Bard College Field Station. “This is important because nontarget effects have been a serious historical problem in biocontrol efforts when one invasive species is used to control another, but end up having negative effects on nontarget native species.”

The authors conclude that “effective development and implementation of evolutionary traps in wildlife management will require interdisciplinary teams of sensory scientists, ecologists, evolutionary biologists, and taxonomic specialists for design, but also wildlife managers and land administrators to help assess feasibility of potential traps and deployment strategies and to guide logistics and implementation.”

“Scientists and land managers engaged in large-scale animal control efforts have clearly been setting evolutionary traps for quite some time before the concept of an evolutionary trap was even defined,” they write. “This framework is useful for a broad array of taxa; accommodates the biology of diversity of species, field conditions, and ecosystems; is responsive to the practical limitations of wildlife management efforts (economic and logistic constraints, conflicting management goals); and is able to provide conceptual tools for improving existing and ongoing efforts.”

Bruce Robertson is a conservation ecologist. His research focuses on questions that provide fundamental insights into ecological theory. He investigates the direct and indirect impacts of human activities on biodiversity, species persistence, and species interactions, with emphasis on how rapidly changing environments may disrupt evolved relationships and trigger maladaptation. He is especially interested in cases in which novel environments trigger animals to make inappropriate, detrimental, and often dangerous decisions. He collaborates extensively on a variety of projects, including a study of the impact of new forms of pollution (e.g., polarized light pollution) on aquatic insects, and research investigating how to grow next-generation bioenergy crops that facilitate the conservation of biodiversity. Trained as an ornithologist, Robertson increasingly uses arthropods, mammals and plants as study organisms. Robertson has a Ph.D. from the University of Montana and a B.S. from the University of Notre Dame.

Felicia Keesing is a community ecologist who studies the consequences of interactions among species. Since 1995, she has studied how African savannas function when the large, charismatic animals—like elephants, buffaloes, zebras, and giraffes—disappear. She also studies how interactions among species influence the probability that humans will be exposed to infectious diseases. Keesing’s disease research has primarily focused on three tick-borne illnesses: Lyme disease, anaplasmosis, and babesiosis. She is particularly interested in how species diversity affects pathogen transmission. Keesing has a Ph.D. from the University of California, Berkeley, and a B.S. from Stanford University.

Richard Ostfeld is a disease ecologist at the Cary Institute of Ecosystem Studies. His research focuses on how environmental conditions shape zoonotic disease risk. In more than 25 years of research, he has advanced our understanding of the ecology of infectious diseases, especially those carried by ticks in the northeastern United States. An internationally-recognized authority on the biology of Lyme disease, he is the author of Lyme Disease: The Ecology of a Complex System. Beyond his work on ticks and Lyme ecology, Ostfeld is broadly interested in mammal ecology, animal population dynamics, and landscape epidemiology. Ostfeld has a Ph.D. from the University of California, Berkeley and a B.A. from the University of California, Santa Cruz.