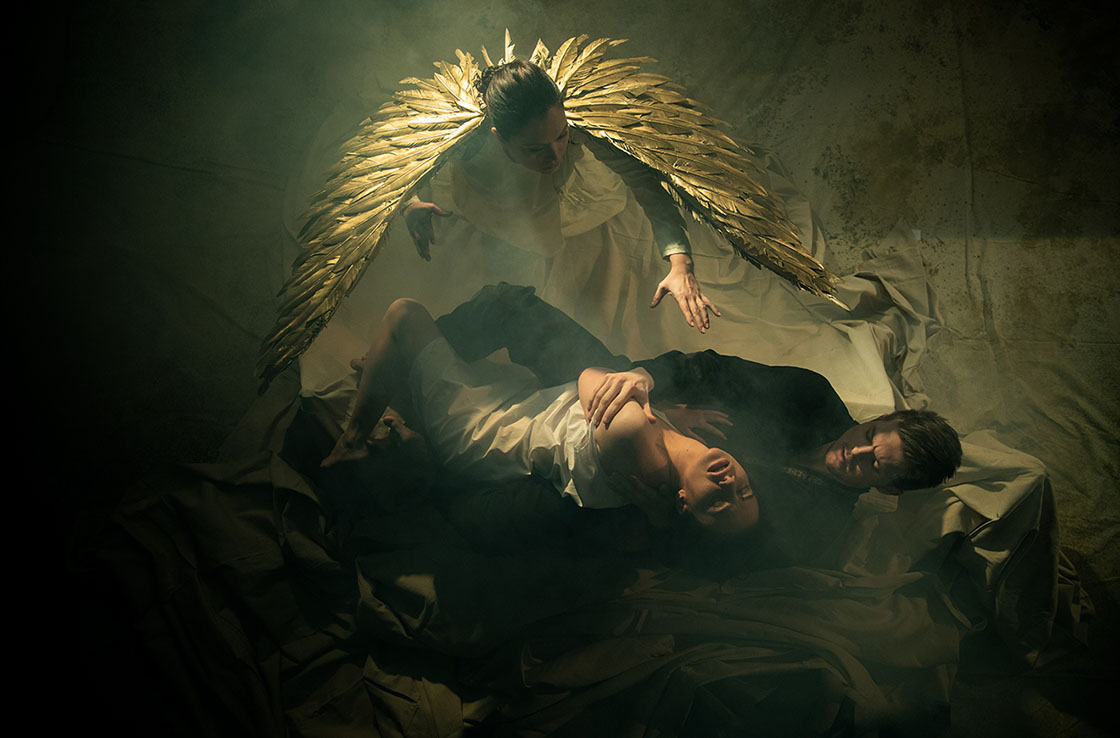 Plus Rimsky-Korsakov’s Operas Mozart and Salieri (Aug 18) and The Tsar’s Bride (Aug 19) in Bard Music Festival
Annandale-on-Hudson, NY— Anton Rubinstein’s Demon opens Friday (July 27) at Bard SummerScape, in a new production by Thaddeus Strassberger, director of such previous SummerScape opera success stories as Der ferne Klang, Les Huguenots, and Oresteia. Anchored by the American Symphony Orchestra under music director and festival co-artistic director Leon Botstein, the new staging represents an all-too-rare opportunity to see one of 19th-century Russia’s most popular operas in the West. Demon runs for five performances between July 27 and August 5, with an Opera Talk, free and open to the public, before the matinee on July 29. SummerScape 2018 also offers the chance to see Rimsky-Korsakov’s seldom-staged operas Mozart and Salieri (Aug 18) and The Tsar’s Bride (Aug 19) at the 29th annual Bard Music Festival. Featuring the Bard Festival Chorale under the direction of James Bagwell, all three presentations take place on Bard’s glorious Hudson Valley campus in the striking Frank Gehry-designed Fisher Center. As the New York Times notes, “Bard has become a haven for important operas.”

Anton Rubinstein’s Demon (1871)
Best-known as a keyboard virtuoso and star teacher whose students included Tchaikovsky, Anton Rubinstein was also a prolific composer. Demon, the most popular of his 20 operas, depicts a fallen angel, or demon, who falls desperately in love with a mortal princess named Tamara, and tries everything in his power to seduce her. Tamara’s struggle to resist him becomes a battle not only for her soul but for the fate of the earth itself. When at last she weakens, the price of her redemption is death, and the demon finds himself condemned to eternal solitude. On the few occasions the opera has been heard in the West, Demon has received a warm welcome; a 2009 London presentation prompted The Independent to declare: “You can see why it did, and still does, carry the wow factor in Russia.”

Rimsky-Korsakov’s Mozart and Salieri (1897), Bard Music Festival Program 8
No 19th-century composer contributed more substantially to Russia’s opera repertoire than Rimsky-Korsakov, subject of this season’s Bard Music Festival, “Rimsky-Korsakov and His World.” Based on the same Pushkin verse drama that inspired Peter Shaffer’s Amadeus, his one-act opera Mozart and Salieri covers the same territory, animating the rumor that Salieri, official composer of Vienna’s Hapsburg court, so envied Mozart’s genius that he was driven to poison him. Although the opera is rarely mounted even in Russia, this is to be regretted, according to the New York Times, which ranks it among Rimsky-Korsakov’s “most interesting work.” Forming the second half of a program exploring “Domestic Music-Making in Russia,” Bard’s presentation stars tenor Gerard Schneider, whose “imposing tenor” (Wall Street Journal) “stole the show” (Allegri con Fuoco) in SummerScape 2016’s mainstage production of Iris. Schneider sings the role of Mozart, with Grammy nominee Mikhail Svetlov, who impressed the Washington Post with his “titanic, all-encompassing bass,” as the composer’s nemesis, Salieri.

There will be a talk before the concert by festival co-artistic director Christopher Gibbs, who is the James H. Ottaway Jr. Professor of Music at Bard College.

Rimsky-Korsakov’s The Tsar’s Bride (1898), Bard Music Festival Program 12
“One of the most lyrical of all Rimsky-Korsakov scores” (New York Times), The Tsar’s Bride turns to the so-called Time of Troubles, the period of Russian history that inspired Boris Godunov and SummerScape 2017’s Dimitrij. Rimsky-Korsakov’s opera depicts Marfa, the merchant’s daughter whom Ivan the Terrible chooses from among thousands as his third wife. Unfortunately she is already in love with another and subject to the unwanted attentions of a third, who attempts to give her a love potion. When poison is substituted, and the man she loves is blamed and executed, Marfa loses her mind, in a bona fide mad scene. In Russia, the opera was well-received at its premiere and has remained in regular rotation ever since. In the West, by contrast, revivals are rare. Yet The Tsar’s Bride is “an upfront rumbustious melodrama, packed with big tunes and thrilling climaxes” (The Telegraph, UK), offering “a compelling study of power and powerlessness” (The Independent, UK).

Before the opera, there will be a talk by Bard’s 2018 Scholar-in-Residence, Marina Frolova-Walker, author of Russian Music and Nationalism: from Glinka to Stalin and editor of the forthcoming volume Nikolai Rimsky-Korsakov and His World.
http://fishercenter.bard.edu/summerscape/
https://www.facebook.com/FisherCenterforthePerformingArtsAtBardCollege
https://twitter.com/bard_fisherctr
https://vimeo.com/fishercenterOpera at Bard SummerScape 2018

Opera in the 2018 Bard Music Festival, “Rimsky-Korsakov and His World”

* The Bard SummerScape coach from Manhattan is available for these performances. See further details below.

Tickets for all Bard SummerScape events are on sale. For tickets and further information on all SummerScape events, call the Fisher Center box office at 845-758-7900 or visit fishercenter.bard.edu/summerscape.

Venues:
SummerScape opera, theater, and dance performances and most Bard Music Festival programs are held in the Sosnoff Theater or LUMA Theater in Bard’s Richard B. Fisher Center for the Performing Arts, designed by Frank Gehry and celebrated since its opening as a major architectural landmark in the region. Some chamber programs and other BMF events are in Olin Hall, and the Spiegeltent has its own schedule of events, in addition to serving as a restaurant, café, and bar before and after performances. Film Series screenings are at the Jim Ottaway Jr. Film Center in the Milton and Sally Avery Arts Center.

New York City Round-Trip Coach Transportation:
To make a reservation on the round-trip SummerScape coach provided exclusively to ticket holders for specific performances indicated by * in the listings above, call the box office at 845-758-7900 or select this option when purchasing tickets. The round-trip fare is $40 and reservations are required. The coach departs from behind Lincoln Center, on Amsterdam Avenue between 64th and 65th Streets. Find additional details at: fishercenter.bard.edu/visit/transportation.

Full Schedule:
For a complete schedule of SummerScape and Bard Music Festival events (subject to change), follow the links given below. Updates are posted at the festival web site fishercenter.bard.edu/summerscape.
Fisher Center members receive priority access to the best seats in advance, and those who join the Center’s email list receive advance booking opportunities as well as regular news and updates.

Tickets and Subscriptions: fishercenter.bard.edu/boxoffice; or by phone at 845-758-7900. Tickets to all mainstage events start at $25.

Updates: Bard’s “e-subscribers” get all the news in regular updates. Click here to sign up, or send an e-mail to fishercenter@bard.edu.

All programs are subject to change.


The 2018 SummerScape season is made possible in part through the generous support of Jeanne Donovan Fisher, the Martin and Toni Sosnoff Foundation, the Board of The Richard B. Fisher Center for the Performing Arts at Bard College, the Board of the Bard Music Festival, and Fisher Center members, as well as grants from the National Endowment for the Arts and the New York State Council on the Arts with the support of Governor Andrew Cuomo and the New York State Legislature.